Beginning operation in 2001, Polish drilling company Albrehta Sp. z o.o. operates as a specialist in the provision of horizontal direction drilling (HDD), piping engineering, design and supervision services. As a market leader the company has been at the forefront of the development of the trenchless drilling industry in Poland and during the course of its history, Albrehta has further expanded to deliver complex projects throughout Eastern Europe.

Within the interdisciplinary field of largescale controlled horizontal directional drilling the conventional practices that are present in traditional drilling do not apply, therefore Albrehta strives to employ a team with the explicit availability and skills set to successfully operate within a technically demanding and specialised industry. Core to the company’s operating strategy is its corporate philosophy of co-operation between members of its team as well as with its clients to ensure that the needs of the project are fully addressed at every level. Therefore Albrehta typically approaches operations with small teams of dedicated staff that embody the company’s commitment to responsible and highly efficient operation.

The efficiency of Albrehta’s work principles was recently impressively proven while executing six horizontal directional drillings in Klaipeda, Lithuania’s largest port, where the Liquefied Natural Gas Terminal was recently brought into operation. Working in extremely difficult geological conditions and with tight deadlines, a Polish company used its up-todate drilling rigs, skilled and professional team, and innovative approach to problem solving to successfully install three gas pipelines. The pipes reached depths of 56 metres, with a diameter of up to 1.2 metres and a total length of 6984 metres, whereby the longest drilling reached 2310m – being the longest drilling of such diameter in Europe so far.

With Klaipeda LNG terminal being in operation, Lithuania’s energy supply became more autonomous as it started importing LNG. For this, a tanker, named ‘Independence’ with a regasification, plant was permanently moored at the port. Freighters can dock there and feed in LNG, and the plant converts it to its gaseous state. In order to feed the gas into the supply network the terminal had to be connected to the mainland through pipelines. Albrehta used a Herrenknecht HK400M HDD Rig and an HK500PT PipeThruster to successfully install the necessary pipeline and fibre optic cable infrastructure.

A total of six horizontal directional drillings had to be completed in order to connect the terminal to the existing supply network on the mainland – three of them to transport the gas (28”) and three for installing fibre optic control cables (8”). Four drillings were carried out from an island in the seaport, located between the LNG terminal and the pipeline system on the mainland and two drillings were carried out under the river in the mainland (572 metres). The choice of the drilling site meant the drilling and insertion lengths could be shortened – one borehole each to the terminal for gas and cable (610 metres) and one each to the mainland (2310m). Access to the island was only possible via ferry, the drilling rig and equipment had to therefore be reduced to a smaller size for transport. The rig chosen for this job can be disassembled into three space-saving modules and transported in standardised compact containers. Furthermore, the rig can handle pulling forces of up to 400 tonnes, which was required due to the length and diameters of the boreholes.

Because of its great economic importance to Lithuania, the project was under enormous time pressure from the very beginning so project delays had to be avoided at all costs. Even in the event of greater forces occurring during pipeline installation, no delays were permitted. At the customer’s request Herrenknecht supplied the HDD Rig with additional drive power to increase the tripping speed during operation. This saved the drilling team valuable time. 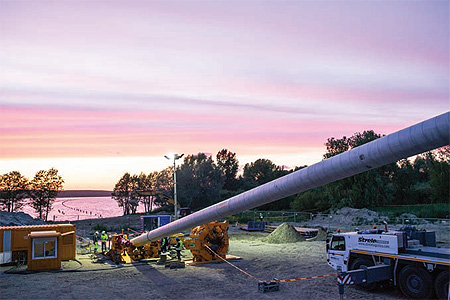 During the advance the geology with its alternately hard moraine loam and pebbles/ cobbles zones, presented man and material with challenges. Torques of up to 120 kNm had to be applied to excavate the borehole. In order to handle this, the rig was equipped with an installed power of nearly 1000 kW to ensure the necessary power reserve. The challenging geology also increased material and tooling wear. Operation of the drilling equipment had to be around the clock so seven days a week was assured.

Such a commitment paid off. In just 34 hours final installation of 2310m was completed with an entry angle of 10.5 degrees. In future, Lithuania can source LNG from the global market, thereby expanding its national energy mix.

The technique of employing HDD as a solution for negating rivers and other obstacles during pipe laying operations has a history that dates back around 40 years. The use of this pioneering technology focuses on improving the predictability operations as well as shortening the relative work periods of projects. By employing the proper planning, based on the correct operational knowledge, Albrehta is able to offer a cost-effective alternative to traditional pipe laying methods.

HDD operations begin with the drilling of a pilot hole, which acts as a sample of the on-site drilling conditions to predict the theoretical run of the project’s trajectory. Depending on ground conditions, various cutting methods are employed. The drilling axis can be controlled continuously or periodically as required, using a probe located at the head of the drilling system. This is supported by radiometric surface or subsurface cable, or cable-free telemetric navigation systems. The adjustment of the drilling direction is achieved by angle rotation of the pipe and cutting segment, which deviates the drill from the axis in the line of expected direction.

The diameter of the resulting pilot hole in the first stage rarely satisfies the requirements of the target diameter to allow for the pushing of the pipe. To increase the diameter of the hole, a single or multiple enlargement process, called reaming, is carried out in the next stage of drilling. Therefore a tool-change is required and a larger cutting tool known as the back reamer is connected to the drill string. The diameter of the hole is enlarged by the reamer by siding and turning beneath the surface in consecutive cycles.

The final stage in the horizontal directional drilling process is the placing of the product pipe. During this stage the reamer, rotary connector and end of the product pipe are connected to the drill string in the hole. As in previous stages, a pipe is placed in the hole that is filled with sludge. Sludge production is integrated throughout the entire process of drilling and instillation. The sludge is produced during the cutting process and is a mixture of cuttings and a drilling fluid supplied under pressure to the hole, known as a bentonite. The sludge has properties subject to control by the selection of a number of features and the quantity of bentonite. Thanks to the use of bentonite, it is possible to achieve the excavation of soil; manage the transition of excavated material to the surface; reduce frictional resistance; cool tools; and seal borehole walls, resulting in greater stability.

Through its pioneering and market-leading understanding of the HDD process, Albrehta is able to ensure a smooth and highly efficient solution in pipeline laying in challenging conditions. To address the issues associated with technically demanding operations, the company carries out dedicated risk assessment and in-depth project analysis to ensure that all of the projects requirements are anticipated and implemented to the highest standard. With its in depth industry understanding, Albrehta is on hand to deliver premier pipe laying solutions to clients old and new throughout the remainder of 2015 and beyond.