Operating from its head office in Hamburg, Germany, DEA Deutsche Erdoel AG (DEA) represents an international exploration and production company for oil and gas. While the company has a 117-year history dating back to when the business was incorporated during 1899, DEA today operates as part of the LetterOne Group of businesses following the acquisition of the company from RWE AG during 2014 at a cost of around €5.1 billion. “The acquisition completed during March 2015 when the final closing of the deal was achieved. In my perception this was a very positive step for DEA because the company’s new owner, LetterOne, has a very strong exploration and production (E&P) background,” reveals Head of DEA’s Germany/Denmark division, Uwe Balasus-Lange. “Staff members of the new parent company have an in-depth knowledge of our business and as a result, decisions relating to the E&P sector can now be made much more rapidly than was previously possible.”

Beside Germany and Denmark DEA has operations within Egypt, Algeria, Guyana, Ireland, Libya, Norway, Suriname, Trinidad and Tobago, and Turkmenistan. However according to Uwe, since taking on the role of Head of DEA’s Germany/Denmark division following the acquisition by LetterOne the company has also continued to enjoy exciting development within both Germany and Denmark. “The main responsibilities within my role are of course are to run the business safely as well as economically, the second of which is currently quite challenging due to the current low oil price. Nevertheless our OPEX in Germany are relatively low compared to the cost of assets in other regions that DEA is currently active in, meaning that we are still generating profit with our German activities,” he reveals. “In terms of production, during 2015 for example, we produced 60 billions of cubic feet (BCF) of gas and 4.7 million barrels of oil in Germany and almost 850,000 barrels of oil within Denmark (all DEA share).”

Within Germany DEA currently operates the Mittelplate field and production facilities in Holstein, including its artificial island situated seven kilometres west of the coast on the southern fringes of Schleswig-Holstein’s Wadden Sea National Park. The company also manages an onshore plant in Dieksand that also serves Mittelplate, meaning that the field has two facilities that produce from the same source and benefits from production that derives from both onshore and offshore exploitation. DEA also maintains a strong presence within Lower Saxony, which represents the centre of 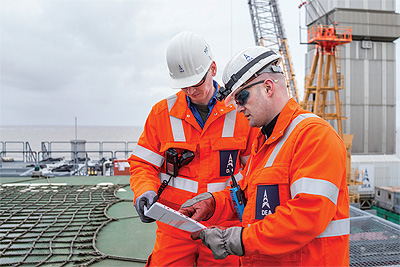 Within Bavaria DEA operates three underground storage facilities with a combined storage capacity of around 66 BCF, which makes the company one of the largest gas storage operators in Southern Germany. Its comprehensive network of storage infrastructure allows the company to provide gas storage solutions to third parties while supplying a continued flow of gas to the German national grid. “As part of our overall strategy we do not store our own gas, meaning that the gas that we produce in Lower Saxony for example, is immediately sold and provided for use in the grid,” Uwe explains. “We currently operate short and long term contracts for both storage and injection activities with third party suppliers that rent our facilities.”

Within Denmark DEA has traditionally partnered with operator DONG Energy to undertake activities within the Nini East, Nini and Cecilie fields, however on 6 April 2016 the company was awarded with two new licenses that allow it to act as an operator within Denmark for the first time. DEA applied for two concessions as part of the 7th licensing round during October 2014. Together with the Dutch exploration and production company Dyas and the Danish state-owned company Nordsøfonden, DEA was recognised when awarding the licences and is now an operator in Denmark for the first time with a share of 50 per cent each in licences 8/16 and 9/16. The concession area of about 530 square kilometres is located in the southern Central Graben in the western part of the Danish North Sea. “We’re delighted to have been awarded these two licences as a positive supplement to our portfolio and that we’re now also represented as an operator in Denmark,” Uwe emphasises. “We see exploration potential in the region and it is certainly good news that we have been awarded two new exploration licences.”

Moving forward it is clear that DEA is in a strong position within the E&P market despite the current depressed price of oil Out of four major E&P companies operating within Germany today the company is the second largest and the only business to retain its own in-house drilling rigs. With a history of experience spanning over more than a century and the support of the LetterOne Group, DEA Deutsche Erdoel AG is set to continue as a market leading business in Germany, Denmark and beyond.