Back to Profile Gallery > Gulfsands Petroleum

Gulfsands Petroleum Plc is an independent oil and gas exploration and production (E&P) company, which has a major focus on the Middle East and North Africa.

It has oil exploration and development projects in the Syrian Arab Republic (currently suspended owing to sanctions), and oil and gas exploration projects in Morocco and Tunisia. Gulfsands is also the operator of two exploration licences in Colombia and produces oil and gas from a portfolio of properties in the US, offshore the Gulf of Mexico.

The organisation was last featured in European Oil and Gas Magazine during October 2013, and as Mahdi Sajjad, CEO, noted the business has seen a lot of new activities over the ensuing eight months: “We have been very active in 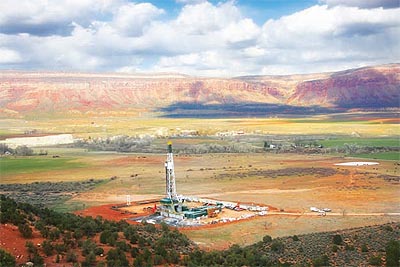 He continued: “We are currently drilling the LTU-1 exploration well in Morocco and have our technical team fast tracking the interpretation of the seismic data we captured in both of these programmes. We are also developing an integrated geologic model for these permits, which is using a geophysical database created from the consolidation of significant amounts of historic 2D and 3D seismic data and well results from earlier exploration on the Rharb, Fes and Moulay Bouchta licence areas.

“At the same time we have been preparing to commence exploration activities (2D seismic programmes) on both the Chorbane permit, Tunisia and the Putumayo-14 and Llanos-50 permits in Colombia, so we have been very busy indeed.”

The Moulay Bouchta permit that Mahdi mentioned was only acquired by Gulfsands in April 2014, when agreements with Morocco’s Office National des HYdrocarbures et des Moines (ONHYM) were finalised. He gave some details about the project: “We believe, and there seems to be a consensus among other oil and gas companies operating in Morocco, that the Moulay Bouchta permit potentially represents the final and very important piece of a significant and contiguous licence position we have spent a year or so assembling.

“That permit covers what is known to be Morocco’s most promising acreage for oil discoveries, and also includes rights to evaluate and further explore three historic and currently closed in oil fields.

“So in addition to undertaking exploration on the rest of this promising permit, we will be looking closely at whether well reactivation or enhanced oil recovery techniques might recover additional oil from one or more of those old oil fields. In addition we will be examining the possibility of there being deeper horizons below these old oil fields, which might be confirmed through deeper drilling.”

It is clear from the allocation of this permit to Gulfsands that the company is regarded as a reliable and top quality operator. Mahdi confirmed that it has earned a glowing reputation across the MENA region: “We are known for our ability to fast track the development of production assets that we discover or acquire. In addition, the company’s management is widely recognised for its ability to work with governments, regulators and big and small E&P companies anywhere in the MENA region and for its extraordinary network of contacts in the international energy sector.”

He added: “Gulfsands has been fortunate to have had a loyal institutional following and the good fortune to have accumulated a significant cash balance by the time we were forced by the EU’s sanctions to cease operations in 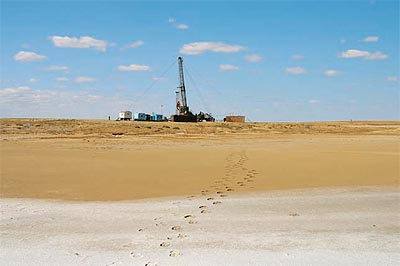 Syria. We believe we have made astute investments in the countries in which we operate, especially Morocco and Colombia, and we have therefore had a developing investment story to discuss with our shareholders, which is something we do on a regular basis.”

Indeed, Syria is an area where the company sees much potential, and it is looking at all the options available that will enable it to re-establish operations there as soon as the sanctions permit. The company also appointed Ian Conway as new executive director: technical and operations, and his experience, as Mahdi highlighted, will be essential for the company’s future operations in Syria. “I am sure his industry knowledge will be invaluable to help us navigate our way through the challenges of evaluating and pursuing new business opportunities, and with the commercialising of discoveries we have made onshore Syria that have yet to be developed,” he said.

“When the EU introduced further sanctions on Syria in December 2011 obliging us to cease to be involved with production activities on our two oil fields in Block 26, north east Syria, we were producing approximately 24,000 barrels of oil per day, we had 2P reserves of approximately 75 million barrels and had made several further discoveries, giving us confidence that upon being able to return to work, with some additional increase in the capacity of our facilities, we should be able to increase production to 30,000 bopd and beyond. We are looking forward to returning to Syria and at levels of production higher than when we were forced to stop work.”

Like all resource and energy companies with exposure to international capital markets, Gulfsands keeps a constant eye on the market and investor sentiment. Mahdi noted that at the moment, investors appear to lack much appetite for what is perceived to be risky exploration and are more focused on investment destined for near-term development and production. “The sector is therefore beginning to see early signs of what is anticipated to be a wave of consolidation among junior oil and gas companies and an increasing use of the farm out process to fund future exploration and appraisal activities. Therefore we might also expect that asset acquisitions/disposals by the larger E&P companies may increase as it is well known that the larger E&P companies are more aggressive acquirers of advanced projects with discovered resources when the capital markets are not competing to provide the funding that those projects require,” he said.

Mahdi also noted that Gulfsands regularly receives approaches from third parties to consider various asset level transactions. “We are confident that the work we have done in Syria and Morocco will continue to attract this sort of attention to our company and therefore we may well see asset level transactions such as farm outs and disposals of some portions of the substantial exploration interests that we currently hold,” he said.

As the company moves forward through 2014 and beyond, it has plans to expand upon its current projects, which involves interpreting more data. “We anticipate we will be drilling a few more shallow exploration wells on the Rharb permit, finishing the processing and interpretation of all the seismic and well log data we have been able to gather into one cohesive and coherent resource. Hopefully, we will also be moving towards the development of a gas sales business onshore Morocco with the completion of a series of successful exploration wells,” said Mahdi as he looks forward to the next six to twelve months.

“Later this year, we will likely undertake the capture of additional seismic data to assist us in refining our list of possible targets to be drilled as deep exploration wells on the Fes permit area, while we will also be focused on fast tracking our geologic modeling of the prospectivity of the Moulay Bouchta permit.”