The decommissioning sector is one of the fastest growing in the offshore and oil and gas industries.

At the same time it is a fledgling industry that requires experienced and highly skilled professionals to guide its development across the North Sea and the wider energy market. Heerema Marine Contractors (HMC) is one such company, widely reputed as a world-leading offshore contractor operating in the international offshore oil and gas industry. Driven by excellence in management and engineering, a passionate workforce and a topedge fleet that 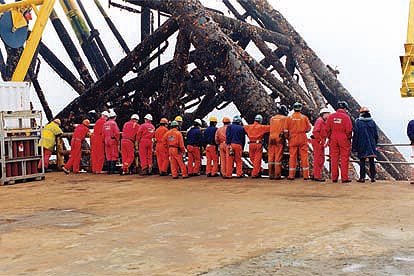 The company is headquartered in Leiden in the Netherlands, belongs to the Heerema Group, and can trace its history back to the late 1940s/ early 1950s. Since this time it has gathered unparalleled experience, often operating in harsh or demanding environments and in a range of contracting models. While its early operations occurred largely under the Heerema umbrella, in 1997 HMC formerly commenced operations as an individual business unit of Heerema Group, operating three fully owned and operated SSCVs that had become in high demand in the North Sea in previous years.

As the offshore contracting industry continued to develop, particularly with the growing number of deepwater oil and gas operations, HMC converted one of its vessels, the Balder, into an advanced deepwater construction vessel with deep water mooring and pipelay capabilities to cope with this market demand. It is through this development that the company has become a recognised and leading expert in the field of deepwater operations, completing many demanding projects, setting a number of industry records and establishing itself as a leader in deepwater full field developments, including subsea infrastructure projects and SURF EPICs.

Today HMC operates a fleet of four vessels; the aforementioned Balder, as well as the SSCV Hermod, the SSCV Thialf and its latest DCV Aegir. It also has access to a wide and varied range of supporting marine equipment including tugs, barges, and hammers. Operationally, its work can be loosely divided into four key product categories – fixed facilities, floating facilities, decommissioning, and subsea structures, flowlines and risers. HMC strives to have a balanced mix of the above products in its order intake.

In the field of decommissioning HMC can offer clients a full turnkey platform decommissioning and removal portfolio by using the heavy lift reverse installation method. For example, the company carries out topsides and jackets removal work, whereby the topsides and jacket sections are removed by reverse installation – a process where the modules and sections are lifted from the platform and placed on board the heavy lift vessel for transport to a designated quayside for offloading, disposal or storage. HMC’s decommissioning services also include Platform Hookdown activities and management, large diameter pile cutting, soil removal and conductor removal operations.

Being a leader in its field means that HMC is involved in some of the major decommissioning projects currently ongoing in the NS. The company is presently working on the removal of platforms in the Greater Ekofisk Area in the North Sea, which is the largest removal contract ever awarded to HMC. For this project HMC was contracted to decommission, remove and dispose of/recycle nine platforms. The project, which commenced in 2008 and is due to be completed in Q4 2014 was originally scheduled to be executed by either Thialf or Hermod, but eventually was carried out by all three of its heavy lift vessels, Hermod, Thialf and Balder to cater for the inevitable schedule 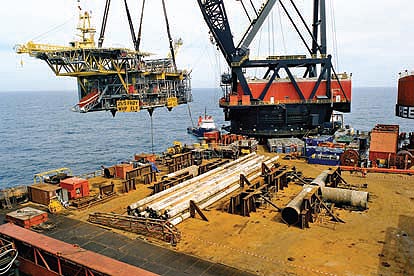 The area in which the project is being carried out is in particularly harsh conditions, with water depths that vary between 70 and 90 metres, and jacket weights between 3000 and9000 metric tonnes. Each of the nine platforms has numerous topsides, varying between six and 16 per platform. As with all HMC’s operations, safety has been paramount throughout the project, resulting in excellent safety statistics without LTI’s, with all work being carried out according to the highest Norwegian standards.

While this project is ongoing HMC has already completed a series of other decommissioning contracts. Between 2008 and 2009 the company was contracted to carry out the decommissioning, removal and recycling, and disposal of the North West Huttonplatform, the largest steel jacket platform to be removed from the North Sea to date. The project was divided into a number of smaller campaigns, commencing in 2008 with the removal of the topsides by the SSCV Hermod, which then transported them to a UK recycling yard in Teesside. In 2009 the jackets were successfully removed and cut into a number of major and minor sections, again by SSCV Hermod, and were then transported to the same yard for disposal.

For more than half a century HMC hasexcelled in offshore and marine contractingoperations in Europe and beyond. With a firmreputation in the fields of deepwater operations and heavy-lift work, the company is continuing to serve the decommissioning market, establishing itself as a partner of choice in every area in which it operates.

The vast potential of the decommissioning market attracts a lot of new players, and more specifically new vessels entering the market. Butno matter how smartly designed, it is not the big vessels themselves that remove platforms,it needs people with the right mindset and experience that prepare the work onshore and make it actually happen offshore. HMC, likeno other marine contractor in the world, has a dedicated removal team with over 35 managers and engineers that have built up systems, tools and experience in removal since the late 1980s.There is little doubt that with that devotion HMC will remain a major name in the removalindustry for many years.