Back to Profile Gallery > IVG Caverns

“Cavern development is a business built on demand. We work with companies in the oil and gas market that require additional capacity,” begins managing director, Friedrich Foltas. “We have a number of each type of cavern in operation, all of which are built in a salt dome. Additionally to those in operation, we are offering rental agreements for future caverns,” he advises. 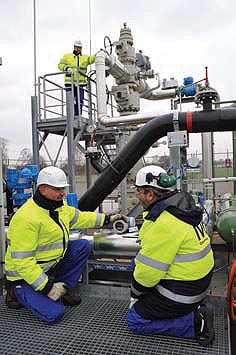 Originating as a fully state owned company, in 1971 IVG received a contract from the German government for the construction of 33 caverns for oil storage, forming the beginning of strategic oil stocks in Germany. In a two-stage movement between 1986 and 1993 the business was completely privatised. The operation today calls upon its main strength, employing the small but highly experienced IVG crew to co-ordinate the sophisticated process in a schedule that typically spans three years, as Friedrich discusses: “We have all the key knowhow within our organisation. We work together with engineering companies such as DEEP and KBB, who have developed expertise in the construction of the caverns.

“In close proximity to the North Sea we have two 44” pipelines that work in unison importing water for the leaching process and returning saturated brine back to the sea.” Salt cavern capacity is standardised between 600,000 and 900,000 cubic metres at depths of more than 1000 metres. The deep caverns are favourable for gas storage, offering maximum pressures of 200bar and the large working gas capacity of 75 million cubic metres is of great benefit to its clients. “We are flexible with our range of geometrical volume stores, offering a variety of sizes to suit customers needs. There are currently 75 caverns under contract, positioning us as one of the largest cavern fields in Europe, with 65 already completed and in operation and ten caverns under construction,” he says.

The current site has in place permits for a further 24 caverns and there is potential within the salt dome to comfortably house more than 140 caverns in total. Clients are comforted by IVG’s experience in developing the site, positioned over high quality salt. Importantly, Etzel benefits from a large oil pipeline network connecting the site to Nord-West Oelleitung GmbH (NWO), Germany’s joining point for transshipping, storing and conveying mineral oil. “In the case of a crisis we have an excellent connection to the refineries. Some of our customers include companies from the Netherlands, Belgium and Portugal, beneath the German stock holding agency who, based on national law, is holding crude reserves, with some of their strategic stocks in Etzel,” Friedrich announces.

Complementing the excellent salt quality and the size and shape of the caverns, the successful growth can be attributed to the logistical positioning. The connection to the refineries in the Northern part of Germany promotes the advantages of storing stocks at Etzel. Gas pipeline connections link directly into the European gas grid, expanding from Siberia to Portugal, and connections within Germany extend to Emden and Bunde, located on the Dutch border and connecting the grid to the Netherlands. Friedrich points out: “It is important for trading, and it has attracted tenants such as EON Gas Storage, Gazprom, EDF France, BP, Dong, EnBW, OMV, Statoil, and Etzel.

“When we began operation over 40 years ago, neighbours were not concerned with the very small consumption of land surface for storing such a huge capacity of oil. This began to change in 2005 when the utilising of gas caverns became much more popular, with tenants constructing their own process facilities.” Rental contracts generally last 30 years, and due to the prolonged nature of the agreement, the tenants undertake the responsibility of the 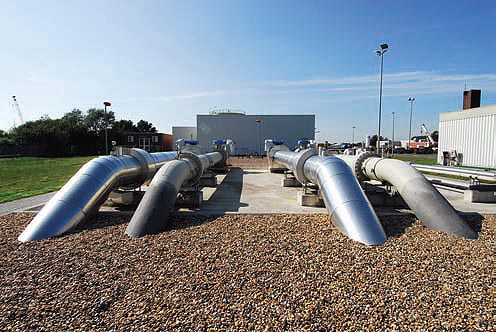 topside with each tenant building the process facilities according to its own requirements. “Surface construction has an effect on the flat land that historically contained little more than houses and trees. An increase of light and noise during the construction phase is common, and the topside facilities include chimneys, flares and dehydration columns, which are new to the area, and neighbours have raised concerns,” he adds. The business has implemented an InfoBox scheme as a communication point for people in the area, providing information about the caverns, from construction to operation and the importance of storage.

Under the current agreements, the business remains active in the construction of caverns until 2017. As focus blends from development to operation, discussions within the industry have highlighted a returning demand for more storage within five years. Providing an insight into the future as the progress of ‘energiewende’ drives forward wind and solar power generation, Friedrich concludes: “Power to gas is a solution in combining renewable production with security of supply. By taking electrical power, producing hydrogen and combining it with CO2 it is possible to create artificial methane. The surplus capacity could be stored into the caverns and put it into the grid on demand. Connection to offshore wind production fields is feasible due to our location, and over the next decade we expect this to become a more prominent development.”

IVG Caverns
Services: Caverns for storage of oil and gas