Today the forward thinking group boasts an impeccable worldwide reputation as a global leader in the dredging industry; a position that was attained through a vision to continuously invest in new equipment, a new dredging fleet, new employees and new activities, as Carl Heiremans, Business Development Manager of Jan De Nul Group, explains: “Over the last two decades we have steadily increased our presence in the offshore services, with our vessels gradually being used more for dredging services. Meanwhile, over the last ten years we have begun building specific vessels for other services such as rock installation, pipeline installation and electrical cable installation. We are currently continuing this trend of expanding into new markets by moving into the windfarm market by adding new vessels to our portfolio that are suitable for the installation of foundations for windfarms. We have more than 6500 personnel working for us and over 600 civil engineers, this means we have a lot of competence and knowledge within our business that complement our strong fleet.”

Another way the group strengthens its services is through acquisitions of companies that enable it to increase its capabilities. For example, Jan De Nul added Envisan, a specialist in soil remediation and groundwater redevelopment, as a subsidiary in 1992. In 2000 Envisan executed its first major international assignment: the rehabilitation of the dump site of Zagreb, in 2000. More recently, Jan De Nul Group added PSR Brownfield Developers to its portfolio in 2012 as well as Algemene Ondernemingen SOETAERT nv in 2015. 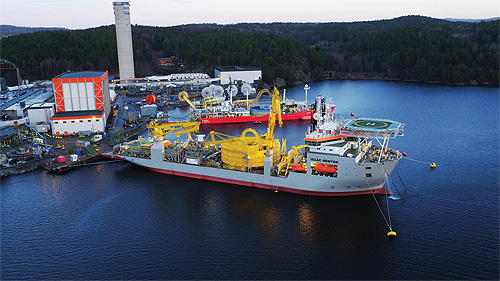 This long-term vision has led to incredible results for the company, which today has an unrivalled reputation for excellence and the world’s most modern and diverse dredging fleet, including the most powerful self-propelled cutter suction dredger, the record breaking J.F.J. De Nul. It also includes the identical Cristóbal Colón and Leiv Eiriksson, the largest trailing suction hopper dredgers in the world; these two vessels have a hopper capacity of 46,000 m3 and are capable of dredging to a depth of 155 m. In addition, the identical Simon Stevin and Joseph Plateau are the world’s largest rock installation vessels.

By merging a superior fleet with 500 expert civil engineers, the group is wholly capable of handling the most challenging of projects. Notable contracts awarded to Jan De Nul Group over the last 15 years include the dredging and reclamation of the second Palm Island in Dubai in 2002, the building of the six new jumbo locks in the Panama Canal from 2009 to 2014 and the installation of 16 foundations for a Windfarm in Sweden in 2009.

“To further strengthen our activities in the offshore wind segment we have recently acquired the jack-up heavy lift vessel Vidar for an offshore wind contract with Nobelwind. This job will take place in Belgium and involves the installation of 51 monopile foundations and 50 wind turbines for the Offshore High Voltage Substation (OHVS). This new vessel has an impressive lifting capacity of 1200 tonnes, making it the second biggest of its kind in the world; because of these strengths, it offers a lot of opportunities for us to take on projects involving the installation of monopiles, jackets and so on and the fact it is already booked up until the end of 2016 is very positive for us,” says Carl.

Alongside this major project, where Jan De Nul Group will execute the design, fabrication and installation of 50 wind energy generators for the OHVS, the company has also secured a contract with DONG Energy to execute cable installation works for the Burbo Bank Extension Offshore Windfarm in Liverpool Bay. Beginning in Spring 2016, Jan De Nul Group will install and bury 25 km export cable between the offshore transformer platform and the beach as well as 32 infield cables between the wind turbines as well as the offshore transformer platform. The Willem de Vlamingh will be used to bury the export cable, while the trenching of the infield cables will be completed by its subsea trencher UTV1200.

The company has also won another contract with DONG Energy for the laying and burying of export cables for the Race Bank offshore wind farm during Summer 2016. In line with this contract, Jan De Nul Group ordered a new multi purpose vessel, the Isaac Newton, which was launched at the Croatian shipyard Uljanik Brodogradiliste. Due to its versatility, the unique vessel can be deployed on a range of niche projects, from installing subsea cables to trench dredging to subsea rock installation.

In cable installation mode, Isaac Newton can transport and lay cable in a single length with a total weight of approximately 10,500 tonnes – an amount far exceeding any of its competitors. Elaborating on the contract, Carl states: “This is an interesting contract for us as it is a technically demanding job that requires a contractor that is capable and willing to develop new technology and new machines in very shallow water where Isaac Newton could not go. The beach in this area has sensitive vegetation that can not be touched or damaged in any way so over the weeks we designed and developed technologies that are now being constructed. These two huge machines, named Sunfish and Moonfish, will then be tested over the next few weeks so they can go on the beach; one will then plough the cable through the sensitive vegetation while the second machine will go underwater to a depth of six metres below sea level.”

With a wealth of major projects to focus on throughout 2016, the future looks bright for Jan De Nul Group as it continues to enhance its solid reputation as to go-to company for niche or challenging projects. On top of this, the company will naturally remain focused on investment in all areas of operation, from personnel to vessels, as Carl concludes: “We are positive about the long-term future, however in the short term the oil and gas market remains sluggish. In response to this we have two multi-purpose vessels under construction for delivery in 2017 that will be used in niche projects such as cable handling, cable installation and rock installation. We are also investing in some dredgers, with one being built in Croatia; this one will be the biggest cutter suction dredger ever made by far. In fact it will be 50 per cent bigger than its nearest competitor!”