Back to Profile Gallery > Maersk FPSOs

Maersk FPSOs specialises in the development, construction, ownership and operation of mobile production systems on behalf of oil companies around the world.

Operating in some of the most demanding environments, the company prides itself on being able to match the exact requirements of each specific oil field.

“Established in 1995 as part of Maersk Contractors, in 2008 the company became a separate business unit within the A.P. Moller-Maersk Group, headquartered in Copenhagen, Denmark,” explains Dave McLean, chief operating officer of Maersk FPSOs. “Working with the company guarantees its customers that they are gaining partnership with a reputable and globally-respected business founded on the strong values of the A.P. Moller-Maersk Group. 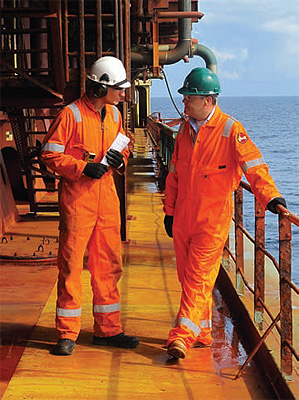 production module. The newest addition to this fleet is the Maersk Peregrino FPSO. This modern FPSO represents the most expensive vessel purchased in A. P. Moller-Maersk Group’s history. It is testament to the quality of work and dedication invested by the Maersk FPSOs team, that it has been possible to convert the VLCC tanker Maersk Nova into this complex FPSO, able to produce up to 100,000 barrels of heavy oil a day for Statoil from the Campos Basin 85 km off the coast of Rio de Janeiro, Brazil.”

Boasting a customer base that also includes ConocoPhillips, Shell and Total, three of the company’s units can today be found in operation in the North Sea, while one is currently located off the coast of Congo: “Maersk FPSOs boasts a long and proven track record of working in highly regulated areas, for example the North Sea where it has been operating since 1996,” Dave continues. “As FPSO contractors historically take on the full construction risk, high quality project management is crucial in order to be profitable and deliver the highest possible value to the customer. Furthermore, the company has always maintained a strong focus and commitment towards safety, with 2011 representing yet another year with zero recorded lost time incidents.”

The company’s concern for safety is very much a core value of the business and is a constant consideration in the way in which it conducts its operations. In fact, the company is also now in the process of implementing a process safety project to increase its understanding and awareness as it relates to all levels of the organisation. This will be achieved through the establishing of a common process safety dashboard across the company.

“Maersk FPSOs’ business model is to develop, build, own and operate floating production solutions,” Dave states. “An FPSO is a complex and customised product designed to the specific characteristics of the oil & gas field it is to operate on, generally for a longer period of time. The overall success of the FPSO is to a large degree dependent on close teamwork between those responsible for its engineering, projects and operations. The FPSO will be much better fit for purpose if operations have been involved in the project execution phase and the operation of a unit, which in complete detail, will be more reliable and efficient. The company believes that the ‘cradle to grave’ approach provides its long term customers with the greatest value.

“All five of the company’s units are being kept up-to-date with the required upgrades and modifications,” Dave highlights. “For instance the Maersk Peregrino operating in Brazil is presently being upgraded with the addition of a salt and sulphate removal module designed to reduce the salinity of the oil and thereby increase the marketability of the oil. In the meantime the Curlew, North Sea Producer and Nkossa II are all operating well beyond initial contract durations, and original design lives, and have received numerous upgrades and modifications to allow this.”

Today the primary focus of the business is on projects that are built upon its most recent FPSO experiences with its newest vessel, Maersk Peregrino: “In 2011 this vessel was rightly recognised by the industry as one of the top five offshore projects of that year,” Dave enthuses. “It was delivered on schedule and to budget, with an exceptional safety performance, with more than 15 million man-hours spent on converting the Maersk Nova, a Very Large Crude Carrier (VLCC) built in 2008, into what is a state-of-the-art FPSO. The project involved people of more than 25 nationalities with the front-end engineering design being carried out in Brazil, while the main engineering took place in Norway, the US, India, Singapore and Denmark, making the whole process a truly global effort.”

The unit itself is very complex specifically because of the huge challenges presented by the oil field in which it operates. The Peregrino oil field holds heavy crude oil with an extremely high viscosity, which requires a series of advanced technologies to process. The Maersk Peregrino needs to generate an enormous amount of heat to separate the oil from gas, sand ukand water. While transporting and storing the crude oil, the temperature has to be kept above 65 degrees centigrade at all times, otherwise the oil will solidify.

In 2011, the Discovery Channel made a one-hour program covering the scale of the Peregrino project from project phase, through hook-up, commissioning and first oil. This insightful documentary will be shown in the UK in the third quarter of 2012.

With the long term demand outlook of the FPSO industry looking increasingly promising Maersk FPSOs’ immediate targets for the next several years are clear: “Going forward the company will begin pursuing a niche strategy that will specifically target its preferred customers and geographic locations where it can best match its project capabilities and expertise. Meanwhile, the key priority in the short term is to drive safe, reliable and profitable operations that provide the company’s customers with services that meet and exceed their expectations,” Dave concludes