In the near century since the Puma brand was established in 1929, the energy company has risen to global prominence, operating in 49 countries, and is now universally recognised as one of the leading players in the petroleum industry. Supplying some of the world’s largest airlines and shipping companies with fuel, the company first stepped into the British market in March 2015, when it acquired its first facility in Milford Haven, Wales. Today, it operates out of nine terminals nationwide, and Puma Energy UK’s General Manager, Roy Brooke updates us on the most recent highlights for the business.

“2017 was a very exciting year for us that saw us purchase the former BP facility in Belfast, meaning that we have entered the tank storage market in Northern Ireland. The acquisition is a natural fit for our business model and gives us access to all the markets there, enabling access to the Northern Irish and Southern Irish markets,” Roy begins. The company’s well-defined business model 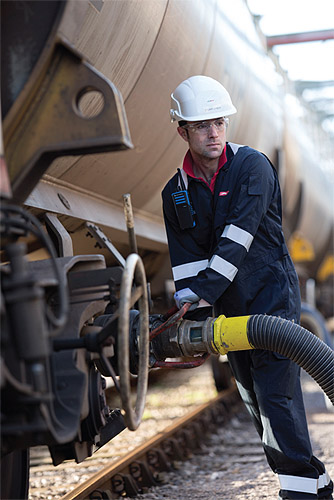 he talks about, fundamentally relies on acquiring what it believes to be the most significant import locations in the UK. “We are confident that we have secured the best jetty for handling the largest capacity ships in Northern Ireland. It really is a fantastic terminal that is doing exactly what we wanted it to do,” Roy notes proudly.

Another highlight for the business last year was its purchase of the two largest ULSD (ultra-low sulphur diesel) imports into the UK, delivered to Puma Energy UK’s facility in Milford Haven. “One of the vessels brought in 140,000 tonnes of ULSD, which is leveraging our supply capabilities into large deepwater ports in the UK considerably,” Roy explains. Furthermore, the company was successful in expanding its proposition in the bitumen area by improving and increasing the range of technical grades it offers to its customers. “We included low temperature, low odour, and wet fix grades, but what is also important mentioning, is that we had a slight repositioning of our supply locations. We moved to Newport, which improved our logistics on some of our largest bitumen vessels. I believe, we now have the largest bitumen supply fleet in the world, so it was key for us to optimise our logistics,” Roy reasons, going on to express his optimism about the future of the sector. “Bitumen remains a strong and interesting area for us, and the market looks good at the moment. We have established excellent relationships with our customers, and the positive start to the year encourages us to expand with further investment.”

It is the uncertainty around Brexit, however, that concerns Roy, as no one can really predict what is going to happen with the market when Britain leaves the EU. “The lack of clarity makes investment decisions quite tricky at the moment, because we do not know what might happen with the border between Northern Ireland and Ireland. It is hard to work out what the paybacks will be, so we are holding further investment at the moment and waiting to see if we will get some guidance from the Government on where we are going to be after Brexit.”

Known for working closely with its customers in order to retain their loyalty, Puma Energy UK continued along the same lines in 2017. The business developed new IT solutions for its clients using the Belfast terminal, making it fully automated. Roy explains how the process works: “We have given our customers the opportunity to enter their orders online, and when a truck comes in, the driver needs only to swipe his card, load at the terminal, and then leave. From our side, it is a full EDI (electric data interchange) process, which allows us to issue automatic invoicing to our customers. It is the first time Puma had done something like that in the UK, so it has enabled us to work with some of our largest clients and help them drive their efficiency in their ordering and order to cash processes, and it is definitely something I will be looking to roll out on the UK mainland later this year.”

The main focus for the company in 2018 will be to further develop its new Belfast asset and emulate its efficient practices into other areas of the UK. “We have already installed an ethanol addition to the Belfast terminal, one of several investments we want to make, in order to enlarge our presence in the Northern Irish and Irish markets. The overreaching aim for us is to continue looking for ways to improve the efficiency of our operations, because this is something that will offer customers a better experience with us and make them come back again and again,” Roy maintains.

“In short, we want to give ourselves maximum flexibility on the supply side that will enable us to land the best value cargoes, which will help usstay competitive,”he defines one of the key features of Puma Energy UK’s long-term strategy. “To do that, we rely a lot on our rail assets, which significantly optimise supply into the terminals. For example, if I am running low on stock in Bristol on one grade, I can call the terminal in Milford Haven and change the configuration of the next train that will be arriving in the next 24 hours. If I had a pipeline, instead, it would probably take me six days of lead time. Having set up numerous strategic locations really gives us a lot of flexibility and allows us to work the assets very hard.”