Back to Profile Gallery > Sub-Atlantic

Since 1997 Sub-Atlantic has been addressing the challenges of subsea operations and today is a market leader in the design and manufacture of small observation class to medium work class electric remotely operated underwater vehicles (ROV).

The company was founded by entrepreneurial engineers who, disappointed with the capabilities of the ROV’s of the time, set out to develop a better product incorporating their offshore experience, a philosophy which continues to this day. Sub-Atlantic operates as part of Forum Energy Technologies (FET) Inc., which is a global provider of manufactured technologies and applied products to 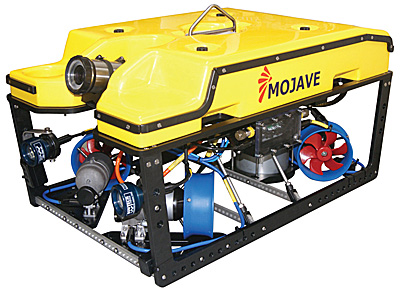 the energy industry. Headquartered in Houston, Texas, FET’s 2000 employees provide the products and technologies essential to solving the increasingly complex challenges of the oil and gas industry. Sub-Atlantic also maintains offices in Houston in the US and Singapore.

As well as ROVs, Sub-Atlantic also produces hydraulic components that are used by companies across the world in the manufacture of hydraulic work-class ROV’s. These include hydraulic thrusters, hydraulic power units (HPU), valve packs, compensators, and pan and tilt units. Alasdair Murrie, sales and marketing manager, expands on Sub-Atlantic’s product portfolio: “Our ROV systems include very small observation vehicles which can fit on top of a coffee table right up to vehicles which are roughly the size of a Mini. Even our most shallow rated ROV’s can reach depths of up to 1000 feet and we have developed a reputation for building systems which can reach 20,000 feet – something that very few operators within the electric ROV world can even come close to.”

The versatile capabilities of Sub-Atlantic’s vehicles means it has gained customers across a number of industries including oil and gas, scientific research, military and diving. “Within the oil and gas industry we provide vehicles to clients such as DOF Subsea, Deep Ocean, Integrated Subsea Services (ISS) and Noordhoek, a Dutch company which undertakes a lot of work in the North Sea. On the components side our customers include Oceaneering International and Fugro, and we also produce an electric ROV, Spectrum, under license for Oceaneering International,” describes Alasdair. One of Sub-Atlantic’s key strengths is its tailored approach to every project, as Alasdair highlights:

“From a sales point of view it’d be great to just sell vehicles off the shelf, but with small electric ROV’s each customer is looking to fulfil their own specific needs. Just about every system we produce is bespoke and involves working closely with the client prior to the build to ensure all of their requirements are incorporated. For one of our key clients, the Swedish survey company MMT, this is very important. Certainly I think our customer support sets us apart from the competition – we have a team of experienced offshore engineers who are fully qualified and able to go out and assist customers if required. We’re also at the forefront of control system technology for the vehicles and have forged ahead with some fairly unique systems within the electric ROV world.

Sub-Atlantic produces six different ROV products, each named after a North American Native Indian tribe, including the newest addition – Mojave (Mo-ha-vay). The most powerful observation ROV for its size, Mojave’s compact design and lightweight construction allows for rapid set-up and deployment using any domestic power supply. “The Mojave fits a little niche we were missing,” explains Alasdair. “That was a good, robust, small observation ROV which you could also attach quite a lot of equipment to. The Mojave can undertake a lot of light observation and survey tasks making it ideal for rental companies or starter companies which have a number of different applications for it. Rather than being too specialist in one field or another, the Mojave provides a frame for attaching smaller, varied equipment such as Non Destructive Testing (NDT) tools to clean a structure and probes to test the condition of the structure including checking for corrosion or cracks. It can be used to map the seabed, collect samples and take photographs and so has applications across a number of industries. In essence the Mojave is designed to be as flexible as possible within a small inexpensive package.”

One of Sub-Atlantic’s most important developments is its subCan control system, which is one of the most advanced systems on the market. Alasdair explains: “We’re constantly looking at our 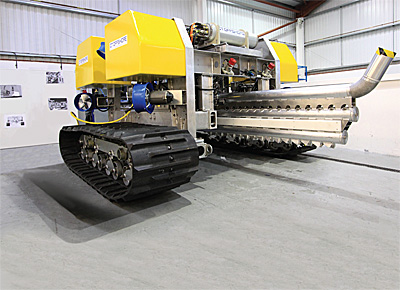 components and trying to make them more intelligent. Our new control systems enable customers to know exactly what is going on inside each component, something our competitors have less ability to gauge. We have continued to improve this system so that we can measure the temperature, voltage and other readings of the individual components, isolate any problems and undertake running repairs whilst the vehicle is being operated. For example a thruster module may become entangled in rope and shut down, but rather than returning the vehicle to the surface to repair, we can change the amount of power the other thrusters are using to compensate for the lost module. This system gives the client the maximum amount of time in the water, which is beneficial from a cost perspective.”

Recently Sub-Atlantic has won a number of impressive contracts including one to supply an ROV system to IFM GEOMAR for scientific research. The vehicle is Sub-Atlantic’s Comanche model and will be used as part of the major MoLAB project. MoLAB is a mobile laboratory, which can be carried on a ship to any location across the world where approximately 12 sensors are dropped down onto the seabed. These sensors monitor everything from pollution to vibrations from earthquakes as well as taking photographs. The new Comanche vehicle will assist in the day to day running of MoLAB, retrieving and dropping off equipment.

With a record week of sales activity in 2010 and new product developments, Sub-Atlantic is continuing to grow its leading position by pushing the boundaries of current technology. Alasdair concludes with the company’s future ambitions: “Although there are still challenges within the market, we have had a successful year in both our established markets such as the North Sea and the Far East, and newer markets like Brazil where we have supplied vehicles to three different companies. The offshore renewable energy industry is an exciting new market, which we have begun to move into having undertaken a specialist project earlier in the year for a Danish company that works on offshore windmills, and is one where we see continued potential for the future. Within the subsea industry we’re already seeing new challenges and technologies being developed as we move into deeper waters. Clients are increasingly looking for ROV’s with more technology for their money but at an affordable price. As part of this we are looking at everything from the shape and composition of the vehicle to all of the individual components and how can we make them smaller, lighter and more powerful. We also have another vehicle currently being designed, which is due to be launched in 2011.”