Back to Profile Gallery > Tankerska Plovidba

Founded in 1955 in the Zadar region of Croatia, Tankerska is the country’s largest shipping company.

With another office in the Croatian city of Rijeka, and an additional subsidiary in London, England, the company works closely with local shipyards on all its new buildings, providing modern vessels to customers in the crude oil and dry bulk transportation sector. Tankerska also has its own fleet, in which it utilises the most modern technology available, manned by operators who are kept constantly up-to-date with regular training and education. In doing this, the company can ensure efficient, safe and environmentally friendly operations for all of its clients.

Tankerska prides itself in the abilities of its crew, and their efforts are rewarded through the company’s shareholder trust scheme. Every employee is made a partner in the company, giving them both a voice in the operations and a share of its profits. This is also supported by a management structure in which there is a strong focus upon stability, quality and a long-term perspective. Such a philosophy means that most employees spend their entire careers with Tankerska, against a worldwide industry average of four years with any one company. 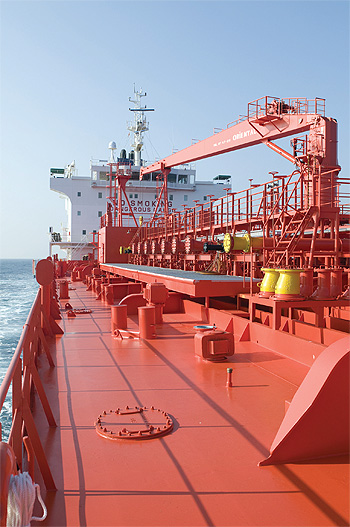 Serving on the same vessels and working together on regular occasions, Tankerska’s employees possess a strong team mentality. Furthermore, the majority of the company’s crew are locally recruited from Zadar, a region that has a rich tradition of seafaring. Many of these employees are graduates of the Zadar Nautical College, an institution that Tankerska sponsors in order to safeguard the future of the area’s seagoing tradition.

The company recently held a ceremony to commemorate the completion of Olib, an aframax tanker designed specifically to transport oil through icy waters. Standing at 246 metres in length and 42 metres wide, this vessel has a deadweight tonnage (DWT) of 114,000 and can facilitate up to 32 crewmembers. Constructed at the shipyard of Split, Olib is fitted with a MAN B/W, type 6S60 MC-C engine, which was built in Brodosplit Diesel Engine Factory. As the second aframax ship that has been built for Tankerska at Split, Olib is a feat of engineering and is able to reach the maximum speed of up to 15,3 knots.

Tankerska has also signed a recent contract that will see the addition of two new product carriers to its fleet. Scheduled for completion by the end of 2010, these two 51,800 DWT tankers will be used to transfer crude oil and its derivatives, and clean liquid cargoes. The company also extended its fleet with three new bulk carriers; the Ravni Kotari, the M/V Ugljan and the Obrovac, built by SPP Shipbuilding in South Korea and Jiangsu Eastern Shipyard, in China. It also has a fourth, the Biograd, scheduled for delivery in June this year. Ravni Kotari and Ugljan have already been hired out, and are currently operating as dry cargo vessels. Together with the Obrovac, these bring Tankerska’s fleet to 20 vessels, and a DWT of over 1.5 million.

The company continues to invest in expanding its fleet, despite the affects of the financial crisis. By taking a balanced approach to its growth and development, with its goal to modernise and expand through continually raising the quality of its service. Tankerska prepared itself for the economic crisis, taking into account the possible negative market conditions that forecasters were predicting for years. This is why the company continued to accumulate reserves during the shipping boom, dividing its fleet between tankers and bulk carriers, which performed in asynchronous cycles.

By ensuring that one fleet segment could support the other depending on the current market conditions, Tankerska was able to maintain a high utilisation rate of its fleet through long-term charters. A cautious investment policy has helped the company keep its debt relatively low, and with the bulk of its latest vessels having been scheduled for 2010 completion, Tankerska was also fortunate to benefit from favourable delivery timing.

In the next five years, the company will continue to invest in its Viktor Lenac shipyard, enhancing productivity where possible. Tankerska’s CEO, speaking at a press conference earlier this year, outlined his hopes for the future success of the business: “Although I am worried by the height of the waves of the present economic storm, I am convinced that the company is on the right course and well equipped to sail through the troubled waters around us.”