Back to Features > 50 years of displaying the offshore’s best

50 years of displaying the offshore’s best

The offshore industry is at the threshold of a brave new world where digitalisation, automation, and machine learning reign. Significant transformations to the way the sector functions seem inevitable and there is no better place to obtain an in-depth understanding of how the biggest names in the field are preparing for the new era than the Offshore Technology Conference (OTC).

Celebrating its 50th anniversary in 2019, the OTC established its reputation of a must-go event long ago, precisely because of its ability to line up a starstudded panel of keynote speakers operating at the highest possible level of the energy industry. This year’s exhibition will kick off on the morning of 6 May (Monday) under the theme: ‘OTC: The Next 50 Years’ and will feature senior figures from some of the biggest organisations working in offshore.

We find among the confirmed speakers at the event Total’s Exploration & Production President Arnaud Breuillac; TechnipFMC’s CEO Doug Pferdehirt; Susan Dio, who is Chairman and President of BP America; EVP and COO of Equinor Jannicke Nilsson; as well as Maria Claudia Borras, the Oilfield Services President & CEO at Baker Hughes. In addition, the world of academia will also be represented in the like of Scott Tinker, Director of the Bureau of Economic Geology at the University of Texas. Finally, appearing as a special guest speaker will be Malcolm Frank – EVP of 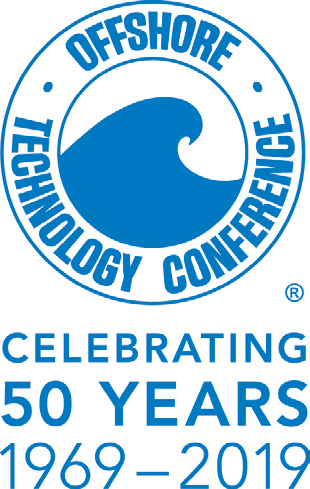 Strategy and Marketing for Cognizant and co-author of What to Do When Machines Do Everything.

Replete with technical presentations, networking events, and breakfasts and luncheons, the four days of OTC 2019 will also feature a series of panels where recognised industry leaders will broach some of the hottest topics across the industry. Starting on Monday, a discussion of the impact venture capital, mergers and acquisitions, and innovators have had on the advancement of technologies within the energy industry, will take place at 14:30 under the title ‘Venture Capital Investment Driving Innovation in Offshore Deepwater.’

On the following day, a panel will assemble to hash out the rapid growth in wind energy activities offshore the US. Comprised of offshore wind energy project developers and supporting organisations, the panel will discuss the technological, commercial, and regulatory challenges this new industry faces from 14:00 until 16:30 on 7 May.

Then, on the morning of the conference’s final day (9 May), two sessions on digitalisation will take place simultaneously. The first one, titled ‘Digitalization and New Technology: Safety in the 21st Century’ will be presented by the Center for Offshore Safety, while the second one will build on prior successful panel sessions in 2017 and 2018, which set the stage of the world of big data and its potential to revolutionise the offshore industry. This year’s theme – ‘Big Data Successful Applications of Digital Transformation and Future Advances’ will showcase specific solutions for added value from digital technologies, its main aim being to demonstrate the industry’s acceptance of digital transformation, strong evidence of insights and knowledge gained, specific value-add realised, and future trends.

Committed to providing a platform for industry professionals from all corners of the world to share their experiences, this year’s edition of the OTC will be the inauguration of a newly-established programme called ‘Around the World Series.’ Scheduled to take place in the first three days of the conference (between 6 May and 8 May), the series will give global industry leaders the chance to discuss new licencing and business opportunities, and present recently-introduced technologies. As of mid-February, representatives from Australia, Norway, Mexico, France, the UK, Israel, Canada, and Guyana have been booked in to deliver insight on what is new in their respective countries.

For centuries in the Western civilisation, the academic world has been looked up to as a cluster of buzzing hubs of innovation and fresh and forward thinking. It is the place where the boldest projects are set in motion to challenge the conventions of the industry and very often charter a better course for it to follow. In order to give exposure to universities’ latest advancements, the OTC will once again run its already traditional University R&D Showcase Programme that will enable institutions of higher education to share with exhibition attendees their current and planned R&D projects that are relevant to offshore technology.

The application process to participate in this year’s University R&D Showcase may now be closed, but it is nonetheless well worth sharing the thoughts of previous years’ exhibitors to highlight the value of being part of the programme.

Professor Zenon Medina-Cetina of the Departments of Civil & Petroleum Engineering at the Texas A&M University emphasised the networking benefits the event has brought for the institution: “It provided an opportunity to get first-hand feedback and true interests for collaboration.”

A similar sentiment was expressed by John Marsh, Director of Operations at The Richard E. Smalley Institute for Nanoscale Science and Technology at Rice University. “Rice University has participated in the University R&D Showcase since its inception and each year, we are able to highlight the late-breaking work of several of our top graduate students. To me, that is the most important thing: sharing the excitement of discovery with the people who are going to make the highest and best use of Rice research.”

It is estimated that since 1969, the OTC has made an economic impact in Houston worth $3 billion. In 2018 alone, the event’s venue – NRG Park – welcomed over 2000 exhibiting companies from more than 40 countries. A total of 22 topical breakfasts and luncheons, 11 panels, and more than 350 technical presentations were held, and over 61,000 visitors attended the conference.

All these figures mean to reveal the virtually endless opportunities for exhibitors and attendees alike to mingle with each other, learn from the best, and set up possibly invaluable business connections with peers from all over the world. Furthermore, as this will be the OTC’s Golden Anniversary, the 2019 edition of the conference will be historic in itself, which provides another incentive to everyone who wishes to be involved. Just under three months away, there is still time to become part of OTC’s history. Book away!