Operating as part of the wider A.Hak group of companies, A.Hak Drillcon was founded in 2009 and has since established a global reputation in the implementation of trenchless drilling technology. The company is based in Helmond in the Netherlands, from where it has successfully delivered projects to clients within Europe, Canada, South America, the Middle East and Asia. These projects encompass technically challenging activities including horizontal directional drilling (HDD), direct-pipe applications, micro-tunnelling, auger drilling, impact ramming, as well as design and engineering services. 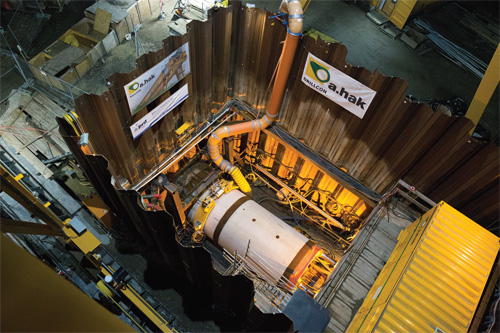 A.Hak Drillcon was previously featured in Energy, Oil & Gas magazine during January 2015, when Managing Director, Ronald Van Krieken discussed the on-going success of the business, including the celebration of its fifth anniversary and the award of a contract by Energie und Wasser Potsdam (EWP) for the execution of five HDD crossings under the Brauhausberg (‘Brewery Hill’) in Potsdam, near Berlin. Over the course of the past year, A.Hak Drillcon has enjoyed further success and executed numerous projects in challenging and diverse locations across the world. “During the past ten months we have established a new company in Canada called A.Hak Canada Inc. and have just finalised our first project, which involved two crossings within the North West Territories. The project included a 1600 metre drill underneath the challenging Mackenzie River, where another drilling company had previously failed. During the drill we used a European HDD Rig, with the addition of a lot of bespoke designed equipment. Furthermore many of the project’s crew members had experience of drilling in Siberia, where the conditions are much the same as in the North West Territories,” Ronald explains.

“We have also set up a brand in the Middle East, where we undertook a technically demanding crossing in the harbour of Dubai,” he continues. “The crossing was for a high voltage cable connection in difficult soil conditions while the entry point was located on the entrance of a refinery, which added to the complexity of the project, however the job again finished very successfully.”

While the level of activity within the oil and gas industry remains slowed due to the current low price of oil, A.Hak Drillcon has maintain its level of business through operations in diverse areas including the drinking water, power and district heating sectors within it’s native Netherlands, Belgium and Germany. For example during April 2015, A.Hak Drillcon completed a project comprising the tunnelling of a concrete casing under the river Elbe, to accommodate the new gas pipeline that will secure the safe supply of natural gas to Northern Germany and Scandinavia. The length of route was some 1520 metres, while an AVND 2400 / OD 3000 mm machine was deployed for the insertion of the concrete casing. Subsequently, two high-pressure gas pipelines of 750 mm each were inserted into the tunnel.

Later during March 2015 it was announced that following the completion of the Elbedüker tunnel, the pipeline bundle assembly pulled in successfully. The bundle of two steel gas pipelines, HDPE conduits and telecommunication fibre optic cables was pulled in with assistance of an HDD rig, to arrive within the pre-set specifications and criteria of rotation and alignment in the reception pit. The final part of operation is the grouting of the annulus space,after which it will be possible to conclude the high profile project.

Further to its expansion into new regions and the completion of a number of high profile contracts, A.Hak Drillcon has also been recognised as an industry leader through the receipt of several industry awards throughout 2015. During October 2015 for example, it was announced that A.Hak Drillcon along with PWN had won the Netherlands Society for Trenchless Technology (NSTT) No-Dig Award for a project relating to optimal drilling through smart soil pre-investigation. The simultaneous execution of the soil investigation and the trial HDD drill, in conjunction with the decision of PWN to invest in the pre-drill research, were recognised as an exceptional innovation. Furthermore during June 2015, the Magazine Inzynieria Bezwykopowa (Trenchless Engineering) announced A.Hak Drillcon as the winner of its yearly Tytan Award for the recently completed Elbedüker Tunnelling Project.

Throughout the rest of 2015 and beyond, A.Hak Drillcon will seek to continue to expand its market presence while shielding itself from the impact of the low oil price by pursuing projects within a range of industries in Canada, Europe and the Middle East. The company will also seek tenders relating to the niche area of direct-pipe drilling, as one of only a few companies in the world that is able to provide this service. As an expert in the field of trenchless drilling applications, A.Hak Drillcon mains a fleet of specialised machinery and a dedicated team of crew members to ensure that it can best meet the needs of its clients, as Ronald concludes: “We have 24 drilling spreads in operation on a daily basis. Furthermore we have our own engineering department meaning that we are able to do all of our own engineering and we also have an innovation team. This team works on innovations and solutions to specific projects, allowing A.Hak Drillcon to provide fully bespoke solutions.”