ECUADOR’S MINING INDUSTRY – PAST, PRESENT AND FUTURE. BY FREDY SALAZAR

Two large mines started in Ecuador last year, opening the country’s account as a mineral producer with an industrial-scale mining sector. Both projects were based on iconic discoveries that in their time changed the scientific and commercial view of Ecuador as a destination for mining investment. The Mirador copper porphyry discovery in 1995 was the first time that these kinds of giant deposits were recognised in Ecuador. Similarly, significant high-grade gold mineralisation found at Fruta del Norte in 2007 opened up the prospectivity for world-class, Tier 1 gold assets in the country.

Ecuador is now recognized as one of the most under-explored, untapped, mineral-rich regions in the world. And the new Mirador copper mine and the new Fruta del Norte gold mine have really shown the world that the country is open for business.

To understand the potential economic benefits mining could bring to the nation and for those that invest in it, look south along the Andes to Peru and Chile. These two nations currently produce 40 per cent of the world’s copper exports1 with mining contributing about ten per cent of GDP to each of their economies every year. The mineral-rich Andean geology clearly does not stop at the border, so Ecuador also has the potential to develop a responsible and sustainable mining sector to underpin its economy.

In a country perhaps more associated with eco-tourism than mining the question has to be asked, is the country now poised for an imminent mineral resources rush? My personal experience in 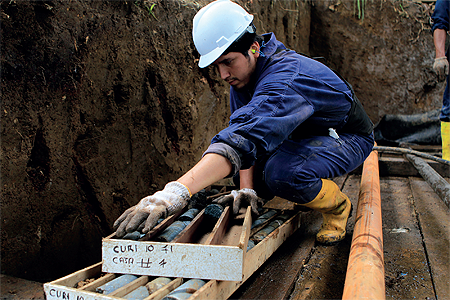 the sector has tracked the evolving approach to the industry.

When I began my career as an exploration geologist in 1986, small artisanal mines had already been operating in the country for more than 50 years. I became employed by an international exploration company in 1987, and from what I saw during my time working at these artisanal mines, it was clear that Ecuador was a land of significant mineral wealth. In fact, while many of my peers took the more oil-centric career path that was typical in our country, these compelling observations during these years became the driving force for what has now been a 30-year career in Ecuadorian exploration.

From studying these artisanal mines and our own exploration activity, we knew that Ecuador had the right rocks. However, the country lacked the right regulation and organizations to take mining from small artisanal sites to large-scale industrial projects. In fact, for long periods the mining industry has been actively discouraged in Ecuador. A moratorium on mining was imposed in 2008, a subsequent 70 per cent Windfall Tax for times of high metal prices was introduced, and a Sovereign Adjustment ensuring majority government ownership killed off the viability of an international resources sector.

It should also be remembered, though, that Ecuador has been a dollarized economy since 2000 which means that printing currency is not an option. This just leaves borrowing, inward investment or foreign export earning as potential sources of US dollars. Historically Ecuador’s economy relied heavily on oil and tourism, and as the nation suffered heavily from global oil prices plummeting in 2013, Ecuador’s relationship with mining began to change. Economic diversification was needed, and in 2015 the Mining Ministry was created. Consultancy agency McKinsey reviewed the mining code, eventually leading to alignment with global best practice. And the windfall tax was finally abolished in August 2018.

The response in the mining sector has been dramatic. Foreign direct investment (FDI) was more than $250 million in 2017, and since 2018, 28 internationally renowned mining companies have established entities in Ecuador to pursue investment opportunities. In 2019 two billion dollars in total were invested in at Mirador and Fruta del Norte. The country now has two well-regulated, carefully monitored mines, employing thousands of local people, and generating vital foreign exchange earnings

Looking ahead, I expect a bright future for mining in Ecuador, although challenges and risks remain. As someone who was born and raised in the country and leads an Ecuadorian mining company, I know, for example, just how important it is to have proper community engagement.

Ecuador is a country made up of many cultures, nations and diversities. It is essential that these are respected during every stage of the mining process in order to preserve the country’s rich history and unique civilizations. Responsible mining needs to build trust and show that the activity will be a win-win for workers, the local communities and the Government.

Of course, a new industry in a country brings many unknowns. There will be some who want jobs and therewill be others who do not want change. Some fear the rapid introduction of a new industry and potential downsides; others welcome the foreign direct investment and potential benefits.

As we know from looking at Peru or Chile, a responsible mining sector can underpin an economy. Directly, mining creates jobs for Ecuadorians, stimulates investment and ultimately produces commodities sold in US dollars. Indirectly, it drives the development of infrastructure and brings international experts to the country with invaluable skills and knowledge to impart.

Importantly, while many Ecuadorians fear the unknowns that mining brings, the government has reached an ineluctable truth that that the country needs a modern mining industry to pay for its social and infrastructure agenda. Simply put, key pillars of the economy such as the oil sector, agriculture (bananas, coffee, cocoa, flowers) and tourism are all ex-growth. With a growing population and falling oil prices a new mainstay of the economy is needed. I also believe that as familiarity with the mining sector grows, support for it will grow.

As we look forward, I can see that the resources sector in Ecuador is in the strongest position it has ever been in its history. With metal prices rising, capital available to invest in exploration and development, those companies willing to take the communities on the journey with them have a wonderful opportunity to create something special. The Government is now truly on side to support responsible industrial mining, and there is no reason for us not to meet or even surpass the competition of our neighbors as well as the global community.

SALAZAR RESOURCES
Fredy Salazar is the CEO and President of Salazar Resources, an exploration company that was founded by Ecuadorians with a focus on creating value and positive change through discovery. The experienced Ecuadorian team has a proven track record of discovery and an unrivalled understanding of the geology in-country, having played an integral role in the discovery of most of the major projects in Ecuador, including the two newest operating gold and copper mines.Salazar Resources is genuinely committed to ensuring that its projects have a positive impact on Ecuadorian communities and the economy. It is trusted by the government to set new standards working with the indigenous communities of Ecuador in the natural resources exploration sector.
For further information please visit: www.salazarresources.com