By being entrepreneurial, well-resourced and decisive, ABLE UK has carved out a 50-plus year history as the UK’s market leading specialist in decommissioning and demolition, with a particular penchant for offshore structures. In more recent times, the company has also come to be a major player in the construction of offshore wind farms. The efforts of ABLE UK were first highlighted by Energy, Oil & Gas in the Spring of 2018, and catching up with Business Development Director Neil Etherington in June 2019, it is heartening to hear that the last 12 months has been a prosperous time for this multi-functional solutions provider to some of the world’s largest organisations.

“There can be little doubt that the decommissioning sector in the North Sea is currently witnessing unprecedented levels of activity,” Neil states. “There is a regular flow of new enquiries coming into us, and, with some confidence, we expect to see this translate into firm orders that should provide regular work for into the next decade.

“Meanwhile, from an offshore wind perspective, the sector has really entered its next, and most significant, phase of development. Buoyed by the fact that the cost of new offshore wind has fallen by 50 per cent since 2015, and by welcome refinements to Government policy, the sector’s confidence is high and the 2019 CfD auction is now well underway. The sector now has increased market visibility to move forwards and this will hopefully extend to seeing new UK-based manufacturing to support the 60 per cent local content for what is still – by some margin – the world’s largest market.”

For Neil, there have been two stand out occurrences – both of which have taken place at the company’s ABLE Seaton Port (ASP) – that have defined the last year for ABLE UK. One was the successful execution of the Hornsea One foundation package installation, while the second was the completion of the recycling of the Shell Brent Delta platform. “The beginning of 2019 saw the 90th and final shipment of components to leave ASP destined for the 1200MW Hornsea Project One Offshore Wind Farm, which will become the world’s largest of its kind,” he details.

“Working with Ørsted – the global leader in offshore wind development – and GeoSea – arguably the sector’s premier installation contractor – the project has encompassed around 45,000 man-hours,” Neil continues. “During this time, ABLE UK’s facility and onshore logistics support resulted in the safe transportation of no less than 550 components and supporting accessories. These included 168 Monopiles – the heaviest being 993 tonnes, and the longest at 71 metres and 147 transition pieces – each standing 28 metres tall.”

In the case of the Shell Brent Delta platform, the recycling rate achieved by the company is approximately 98.5 per cent, and it now hopes to replicate its success with work that will commence shortly on the Shell Brent Bravo rig platform that arrived at ASP in June 2019. Standing 410 feet tall and 230 feet wide, and weighing around 25,000 tonnes, Brent Bravo is the second of the four Shell Brent platforms set to be decommissioned at ASP, and was transported from the north-east of Shetland by the Allseas Pioneering Spirit, one of the largest vessels ever built. Upon arrival, Brent Bravo was transferred to a 200-metre-long barge dubbed the Iron Lady for the final part of its journey to ASP’s Quay 6. The final manoeuver saw the platform ‘skidded’ on to the multimillion- pound demolition pad, which forms part of what is possibly the strongest quay in Europe, and one that ABLE UK has invested £28 million in to meet the requirements of the Brent platforms.

“The Brent decommissioning project is the most significant of its type to date, and the fact that ABLE UK was selected against an initial longlist of 131 potential disposal yards demonstrates the 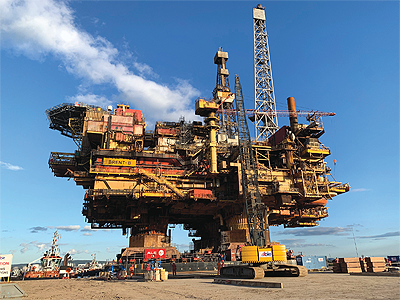 reputation that we have established through a long track record of working with the world’s major offshore energy companies,” Neil explains. “The Brent Bravo platform will provide a spectacular, albeit temporary, addition to the Teesside skyline while we undertake the decommissioning programme with the aim of recycling over 98 per cent of the structure within a 12-month period, with the Brent Alpha platform following shortly thereafter.”

For the future, ABLE UK is also looking towards several other major contracts that it has successfully tendered for in recent months. These include a major decommissioning project that will involve the dismantlement, recycling and disposal of offshore natural gas platforms from the ExxonMobil Canada-operated Sable Offshore Energy Project (SOEP) off the coast of Nova Scotia, Canada. The project itself will involve the removal of seven platforms and their jackets using one of the biggest crane vessels in the world, the Heerema Thialf, with the components being transported to ASP in a series of barge movements, the first of which is scheduled to arrive in the second quarter of 2020.

As for the company’s next major offshore wind contract, this will be the installation of the Mitsubishi Vestas turbine package (90 nacelles, 270 tower sections and blades) for Innogy’s Triton Knoll Wind Farm, which will start in September 2020. “The energy sector is very much front and centre of our future plans, and to that end, as we seek to further expand our footprint as we look forward to continuing to attract these activities to the Teesside area,” Neil proclaims.

To this end ABLE has started the process of securing planning permission for a new c. 250- acre site at South Tees. Adds Neil: “The plan is to initially develop two adjacent offshore wind installation bases which would include c. 950m of new deep-water quays. The land falls within the area now owned and manged by the South Tees Development Corporation and we have received fantastic support from our area’s elected Mayor, Ben Houchen. We would hope that this first stage of development would be the catalyst to develop a Tees-based cluster, including manufacturing, to service the ever-growing needs of the sector.

“ABLE UK is an entirely privately-owned business, very much in control of its own destiny, and has a long track record of investment in new facilities and of putting its money where its mouth is,” Neil concludes. “In the last six years or so, ABLE UK has invested more than £120 million – without recourse to external borrowing – and that investment is certainly delivering a return in terms of attracting new and sustainable business.”