One man’s waste is another man’s biofuel. As it stands, the waste industry is one that is defined by waste being combusted to generate heat, and that heat being converted via steam turbines into electricity. The carbon dioxide that is generated as a result is then added to the air, along with the contaminants found in the waste.

This is why Swindon-based Advanced Biofuel Solutions Limited (ABSL) has come up with the answer to reduce these emissions and contribute to the move to net zero. Through the utilization of its proprietary technology, RadGas, ABSL is capable of converting household waste into low carbon biofuels that replace fossil fuels. As part of the process of producing those much- needed low carbon biofuels, RadGas captures the carbon in the waste as carbon dioxide, generating the negative emissions necessary to reach net zero. 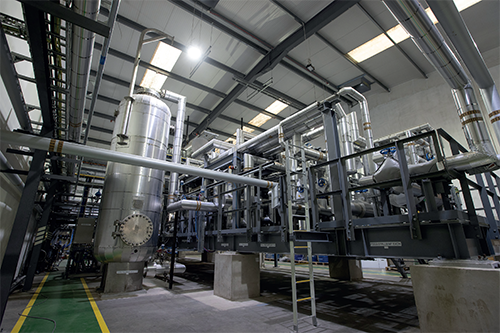 Burkey, the Executive Chairman, we learn about ABSL’s innovative developments and operations. “The path to net zero is to electrify and switch to hydrogen as much as possible, but there will still be positive greenhouse gas emissions from the resulting energy generating assets. This means that the only way to net zero is to have a set of complementary technologies and processes that deliver negative emissions. The UK produces enough waste to be able to deliver negative emissions sufficient to counter the residual positive emissions.”

He begins to explain that ABSL’s business model is to take waste in and convert it to low carbon biofuels, which can be used in parts of the economy that are difficult to electrify; the main two sectors being heating and transport, particularly for HGVs. “Our process naturally generates a gas with a very high concentration of carbon dioxide that we are able to capture as part of the fuel production process. We then liquefy or sequestrate that carbon dioxide, and the biofuels that are produced for heating or for transport are therefore generating negative emissions through the carbon capture process,” Nathan says.

While the root of ABSL’s processes rests in engineering and creativity, safety and agility are equally as paramount when working with these elements. Initially, the company found that it was not succeeding in achieving its desired result, so the team had to be able to adjust and adapt. “Since our inception, our progress has been more of an evolution than a revolution; we’ve derived our process by countering a thousand challenges with a thousand solutions. At the heart of this work, our team has to be persistent. So I think the absolute core of our company culture is around the determination of our key people to be creative in solving problems. But we also have the operating side of the business where there is absolutely no space for creativity, because we have to be focused on safety and procedure to ensure that our staff are well looked after,” he says.

The development of ABSL’s technology began in 2005 as a spin-off of an application of plasma furnaces that were used to reclaim precious metals from items like circuit boards. “That was a process for the recovery of valuable metals, and the concept was that you could use a variation on that plasma furnace to crack the residual tars left in syngas after gasification,” Nathan explained. What he describes involves a carefully controlled process in which waste is gasified at around 750C; if the temperature is too high the metals in the waste may melt and shut down the process. However, at these low temperatures, the waste is only partially gasified and requires a plasma treatment step. The genesis of the idea was trialed and tested at a pilot plant built in Swindon in 2010 with the aim of producing electricity.

The other challenge with the waste derived syngas is the ash. “The way in which RadGas addresses this challenge is by introducing the gas into 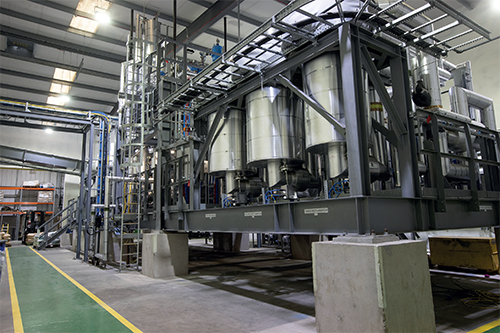 the furnace tangentially so that it swirls around inside. The ash is then pushed to the sides and falls down to form a slag pool which is tapped periodically. The slag then solidifies as it cools into a vitrified material that is inert and can be broken up and used as an aggregate in the construction industry. In other processes, some of that ash would end up in the atmosphere,” he explains.

Although the pilot was successful in proving the technology, it was challenging to commercialize as incineration was the established technology in the waste market. “What the team realized then was that there was potentially a higher value for that output; not to make electricity but to make fuels with carbon capture. So a second pilot was built to demonstrate this use case before moving to a commercial demonstration scale at a new plant in Swindon enabled by critical financial support from the Department for Transport.”

The first of its kind, the new facility is able to support the conversion of one ton of waste per hour. “We then process the syngas into 200 kilograms of biomethane and 800 kilograms of carbon dioxide, operating for 7500 hours a year with a team of 25. The biomethane that we make is injected into the grid and transported to compressed natural gas filing stations operated by one of our partners, Air Liquide. Biomethane provides an essential low carbon alternative to fossil fuels for HGV operators. The process of delivering these fuels to transport has to be compliant with and certified under the Renewable Transport Fuel Obligation,” Nathan informs us.

As an esteemed entrepreneur who is passionate about the contribution his company is making to eliminating the carbon economy, Nathan is excited about the future. He is keen to see his business push the boundaries in its goal to help the UK achieve net zero. In doing so, ABSL is in the process of expanding its footprint to support these efforts better. “We are already developing a plant that is 15 times larger than Swindon in Cheshire as part of the Protos Energy Park. It will take in 133,000 tons of waste per year and produce enough biomethane to power approximately 1000 trucks and at the same time the carbon savings are around 175,000 tons per year. We are hoping that we will have additional sites in the UK under development within the next six months,” he expresses.

According to Nathan, ABSL’s operation is one of the best practices available to utilize waste more effectively, and he hopes that these measures will get to a stage where they can be further commercialized and adopted across the globe. “Our business model will ensure that waste is transformed into something relevant to delivering energy transition, but in a way that is much more environmentally friendly than existing technologies. Converting waste into low carbon fuel that can be used in those areas of the economy that are persistently tricky to electrify provides an energy solution that is critical. Having no emissions into the air significantly allays the concerns of local people about air quality. For me, it’ a triple win from where we are today; a much better way to handle and process waste, generate low carbon fuels for heating and transport, and capture carbon delivering negative emissions for net zero. For me, there’s nothing in business more exciting than contributing to the halting of climate change” Nathan concludes.