Established in 1998 as a subsidiary of INTRO holding group, Advanced Energy Systems (ADES) is a Cairo based joint-stock free zone investment company offering a diverse range of services to the oil and gas industry.

“We were founded in 1998 and registered in the EGPC (Egyptian General Petroleum Company), as per Egyptian law. ADES became a pioneer in the Middle East offshore market through developing the rig less offshore drilling methodology. This developed into ADES acquiring a number of land rigs before moving further into the offshore side of the business,” explains Mohamed Khalil, offshore vice president of ADES. “Today we have ten land drilling and work over units (750-2000 HP), an ADM II 200ft jack-up project and accommodations assistant barge, acquired in 2008, and an ADM III 250ft jack-up drilling and work over unit being contracted right now. On top of this, in April 2013 we purchased an ADM IV 300ft jack-up drilling rig and work over unit; and completely re-activated and refurbished it and put it to work in august 2013. 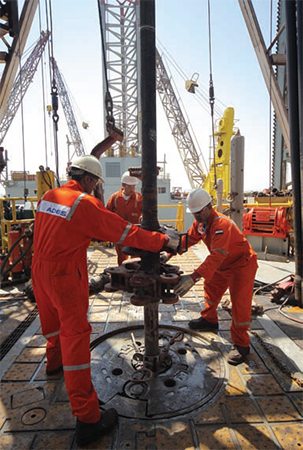 Operating in four divisions, marine contracting, and offshore hydraulic work over, offshore well-service integration and engineering and project management, the company is a market leader in financing and sponsoring the operation of cutting edge marine spreads that find solutions to specific market needs. For example, its self-elevating work boats and jack-up barges deliver versatile self-contained work platforms, capable of supporting 24 hour rig less offshore operations and reducing weather waiting times to a minimum. The benefits of these innovations include 50-70 per cent faster jacking up and down than average jack-up rigs, which therefore allows vessels to take swift advantage of short weather windows, no need for tugboats for transportation between locations, and adequate power generation and heavy lifting capacities that ensure full support to a broad range of offshore operations.

With a core focus on rig less offshore work over, platform maintenance, well servicing, and marine vessel operations since its inception, ADES set up a unique range of marine services to support its offshore activities. A vast amount of upfront investments were raised to purchase state-of-the-art self-propelled jack-up barges able to accommodate heavy work over and well servicing equipment, provide smart module systems with the capabilities to perform full scale rig less operations on satellites and single-well platforms. These developments have enabled ADES to lead the way in offering an innovative solution that solves a chronic industry issue and improves an operator’s Opex and operational flexibility.

Furthermore, the forward-thinking company developed the innovative modular offshore hydraulic work over intervention techniques in Egypt and pioneered the entire Middle East market through addressing the need for jack-up drilling rigs to perform simple intervention and work over operations in shallow waters. “We are concentrating on growing the offshore side of our business more than land rigs from now on as the market in Egypt is enjoying a 90 per cent utilisation for offshore and onshore; as a matter of fact, the market is in need for supplying two jack-ups approximately in the Gulf of Suez and at least one floater in the Mediterranean. Egyptian Natural Gas Holding Company (EGAS) has awarded licenses for numerous offshore blocks under the Egypt 2012 international bid round,” says Mohamed. “Recipients include established players such as BG (block one, north Gamesha offshore) and BP (block two, north Tineh offshore). There are major challenges for multinational companies accepting payment in local currency instead of the announced per contract, for example 70 per cent in US dollars and 30 per cent in Egyptian pounds. However, as an Egyptian firm we accept full payment in Egyptian pounds, which gives us leverage in the local market.”

The 100 per cent Egyptian owned drilling contractor’s rigs and barges are currently contracted to the GPC, FANPETCO, GUPCO and are operating in the Gulf of Suez, yet Mohamed anticipates more contracts in the future. “We are focusing on the Egyptian local market and aim to utilise our recently added rig, ADM IV to become the local drilling contractor of choice in Egypt,” he says. “Our flexibility to client requirements, expertise of our people and our expert eye in picking up an old asset to refurbish it and extend its operational life span are all key strengths we have to offer our existing and future customers.”

With proven experience in providing solutions, ADES is now focused on launching its newest innovative equipment, which will address challenging deepwater operations while also offering flexibility and efficiency in shallow waters. Based on ultra-modern technology used in ship design, motion compensation, ROV, marine architecture and subsea intervention techniques, ADES has integrated marine technology with its own unique subsea intervention systems to form the most versatile, self-contained multi-purpose well-servicing, offshore maintenance and emergency response setup in the world.

Looking ahead, Mohamed has a clear focus on the future of ADES, anticipating increased growth and success for the innovative firm. “At the moment we would classify our position as one of the top three local contractors of choice in Egypt; in the next three to five years our aim is to become the contractor of choice in the Middle East and North Africa, operating four jack-up drilling units and two barges in these areas,” he concludes.