Headquartered in the Philippines, the Atlantic Gulf & Pacific Company (AG&P) was established in 1900 and is today recognised as a pioneer of breakthrough design, engineering, fabrication and construction services.

Synonymous with the country’s construction industry, the company built the first steel bridge in the Philippines as well as other major infrastructure, such as Manila’s water and sewage system, which still exists today. Following decades of steady growth, the company honed its skills for ingenuity and reliability and became renowned as one of the leading modularisation and infrastructure services in the world.

Purchased by its current investors in 2011, AG&P has since witnessed a period of aggressive growth and modernisation, which has thus resulted in it becoming the only Philippines headquartered, multi-national organisation. Elaborating on these rapid developments, AG&P’s executive general manager David Northall begins: “AG&P offers industrial process outsourcing services to some of the world’s most critical resource and infrastructure projects. As part of its recent expansion, AG&P grew its module fabrication yard capacity from one million square metres to 1.5 million square metres. AG&P’s Bauan Yard is one of the largest fabrication and assembly yards in Southeast Asia, and features 900 metres of waterfront in a protected harbour. The newly opened Batangas City yard is located just ten kilometres from the Bauan yard, and is adjacent to a major container port, as well as a general and heavy cargo berth area.

“The yards are located next to easily accessible deep water jetties, enabling seamless module delivery,” says David. “The Bauan yard is currently being upgraded to allow for multiple and much larger projects. Currently, the yard can handle individual modules of up to 6500 tonnes, and this capacity will grow to 10,000 tonnes by the time the upgrade is complete around the end of 2015.”

He continues: “AG&P’s second yard is located in Batangas City, fewer than ten kilometres from its Bauan yard. The yard measures over 500,000 square metres, and is able to support two major projects at any time, with up to 25 modules being worked-on simultaneously. It is adjacent to a major port, as well as a general and heavy cargo berth area, with port depths up to 14 metres. In addition to growing its yard capabilities, AG&P has also grown its workforce, and has brought in international expertise to manage multiple projects for international blue chip organisations. The company currently employs more than 7500 staff across its two fabrication yards, with another 1500 employees working overseas as part of AG&P’s FieldCOM division. 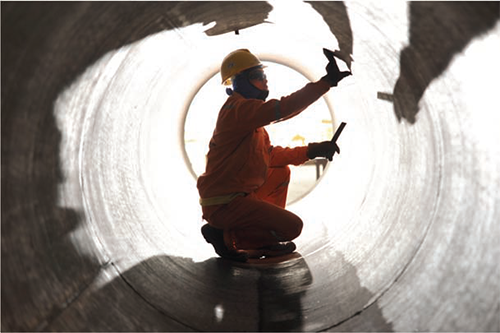 With a mission to change the way companies within the infrastructure and construction industries do business, AG&P’s core aims are to accelerate construction through the delivery of its purpose-designed Modstruction solutions for complex projects, while also providing holistic, competent personnel to job sites around the world. Furthermore, by working with the best global partners, the company can provide cost-effective services across the whole infrastructure lifecycle; this includes phases such as planning, design, construction and operation. Indeed, through providing its expertise from the early planning stages of a project, all the way through the commercial operations, AG&P optimises cost, quality and safety through delivery its mission-ready modules that also enhance ease of construction, versatility, and reusability during critical infrastructure projects.

Currently working with a number of blue chip companies within the oil and gas industry, AG&P’s competitive advantage not only stems from its unique Modstruction approach and large, state-of-the-art fabrication yards; its highly trained Filipino workforce execute services to the highest level of quality and exhibit an unrivalled passion and commitment to their work. Indeed, it is these strengths, as per press reports in 2012, that have led to the company being awarded a $152 million contract in October 2012 to provide the ‘electrical backbone’ of the Inpex Corp led Ichthys LNG project in Australia’s Northern territory.

As per the 2012 press report, a vital project that will provide critical LNG to countries such as Japan, AG&P will modularise 26 local electrical rooms (LER), in addition to local instrumentation rooms (LIR), to support the second largest private investment in Australia’s history. AG&P’s work involves the design, construction and delivery of highly engineered modules. The modules, called ‘e-houses’, contain sophisticated electrical control and monitoring systems that will govern all power distribution for the project. With construction beginning in the first quarter of 2013, the LER/LIR fabrication and assembly will be wholly constructed and integrated in Batangas before it is shipped back to Australia in 2015.

In addition to this major contract, AG&P in partnership with ALE through Australian-based consortium, AG&P ALE Ventures Pty Ltd., has unveiled the Hydro Deck, a world-first mobile port solution capable of enabling delivery of combined loads of up to 22000 metric tonnes, regardless of tidal conditions.

Elaborating on the groundbreaking mobile port solution, David highlights: “After extensive research, AG&P, in partnership with ALE, an international heavy transportation and lifting company, developed and constructed the Hydro Deck. The Hydro Deck uses a proprietary water ballast and air tank system to provide buoyancy control, which allows it to compensate for both rapid tidal variations and load balancing as massive modules move across its deck. The Hydro Deck allows for significantly wider roll-on, roll-off (Ro-Ro) module delivery windows, and enables efficient, cost-effective and timely module delivery, which in turn helps to keep the construction timeline for projects on-schedule and within budget. Its leasing arrangement also reduced capital expenditure, as project owners are not burdened with an expensive asset that must be dealt with after project completion.”

Measuring 140 metres x 40 metres x 12 metres, the now complete Hydro Deck has been delivered to its first project, where it is being used as a gateway through which large-scale modules from across the globe will be delivered. A world-first, the mobile port solution can ensure 24/7 delivery of combined loads up to 22000 metric tonnes in all weather.

AG&P also recently worked on the world’s largest modularised complex coker unit for BP’s refinery modernisation project in Indiana, which involved the fabrication of the world’s first modularised complex coker unit. “AG&P managed the fabrication, assembly, packaging and delivery of more than 70 modules and 20 large vessels. All of the modules were completely fireproofed on delivery. The project received an ‘Award of Excellence’ from the Safety Organisation of the Philippines for exceeding seven million safe hours worked in AG&P facilities without Lost Time Incident (LTI). AG&P’s ability to deliver infrastructure on-schedule was pivotal to the project’s success, with access to the project site via the Great Lakes freezing over during winter each year,” says David.

With a stringent commitment to operational excellence, quality and safety – the company recently passed 32 million man hours without a Lost Time Incident (LTI)- as well as its highly advantageous Modstruction process, the future looks positive for AG&P as it continues with the execution of its major projects and plans further investments, as David concludes: “In 2014 we aim to provide some of the largest and most highly engineered modules in the world, and delivering the world’s first mobile port solution capable of overcoming even the most extreme tidal variations. Furthermore, we will be upgrading the Bauan yard, bringing its capacity to over 100,000 metric tonnes while also continuing to provide world-class training to its workforce, which will further establish AG&P and the Philippines as a leader in advanced industrial process outsourcing services to the world’s most complex and essential infrastructure projects.”