Providing a second lease of life

Founded in 2009, Aleron Subsea is the result of the combined efforts of its founders Mike Bisset and Angus Kerr, two men who between them possess a great many years of experience in the remote operated vehicle (ROV) industry. “Established initially in Singapore, the company was created as an independent supplier of ROV systems and associated equipment to this sprawling global market,” begins Aleron Subsea’s Business Development Manager, Gary McConnell. “The early days of the business saw it purchasing some used ROV assets, refurbishing these and then 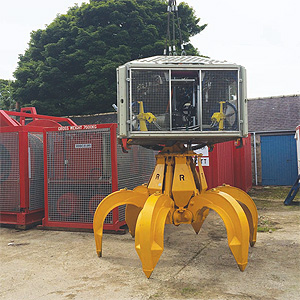 renting them back out to customers. Having experienced initial success, the decision was taken to relocate the company to become a UK entity in 2013.”

In addition to the resale of used ROV systems, which have been serviced, repaired and upgraded, Aleron Subsea continues to develop its own suite of components and control systems. From its site in Westhill, Aberdeenshire, the company currently has ten workclass ROV systems. Its site sits alongside that which belongs to ROVQUIP, a company established by Angus in 2012 and specialising in concept design, prototype, fabrication and the testing of subsea tooling. The acquisition of ROVQUIP by Aleron Subsea was completed in September 2015, with the twocompanies existing as complimentary entities, each enhancing the service offering of the other.

Aleron Subsea’s own service offering has recently expanded as a result of two important developments within the business. At the turn of 2016, the company was to win a significant contract with new client Fletcher Offshore, the brief of which led Aleron Subsea to commence with the design and manufacture of what it calls the AUXROV system. “Fletcher Offshore approached us with a contract for seabed boulder clearance work in the offshore windfarm sector,” Gary explains. “Highly capable of delivering large amounts of flow and pressure from its 200HP dual HPU system, some of the applications that the AUXROV system can be adapted for include clam shells, mass flow excavation tools, sheer cutters, diamond wire cutters and multipurpose tracked skids. It means that we have created a multipurpose ROV system that we can continue to expand upon going forward. At the same time, we have now commenced with the building of the AUXROV2.”

AUXROV has also been installed with the company’s own Gladiator ROV control system. Developed in-house as a cost-effective solution for upgrading any ROV by overcoming obsolete electronics, Gladiator utilises the same board throughout Aleron Subsea’s main control POD, valve packs and topside in order to simplify and reduce the cost of carrying spares. Gladiator also boasts modular options that can be added as per client requirements. “What the Gladiator ROV control system does is provide a vital life extension to used ROV’s,” Gary states. “The older an ROV 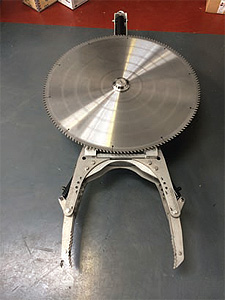 gets the harder it is to service and support the electronic elements. The Gladiatorsystem is helping to increase the life of these ROV’s, in some cases by as much as ten years.”

These are exciting times for Aleron Subsea. Not only has 2017 seen the company announce a six-figure ROV sale to a new client based in South East Asia, but it has also enhanced its international credentials by signing two contracts for work based in North Africa. The first of the two projects for the client in question, Oceana Subsea, saw Aleron Subsea supplying an Aleron Subsea Triton XL, equipped with ROVQUIP’s new decommissioning multi-mode cutting tool, to operate on a subsea intervention project.

“As a company,” Gary says, “we are always looking to develop new tools and solutions in order to resolve the next series of problems that our customers come to us with. One of the sectors we are getting a number of requests from at present is the decommissioning area. In response to this we are looking at developing our existing range of cutting solutions and how we can develop the AUXROV system to assist in improving subsea dive times and seabed removals.”

The long-term aim of Aleron Subsea is to become an internationally recognised ROV equipment manufacturer. “We will continue to work on expanding our international presence, while developing new products and technologies that meet market demands.”