The opportunities and challenges of introducing hydrogen. By Dr. Arul Murugan

With the UK hosting COP26 in November 2019 and targets being set to reach zero emissions by 2050, tackling climate change requires all sectors and industries to adapt and adopt new ways of operating in an effort to reduce carbon emissions. Within the energy sector, hydrogen has a big part to play in reducing emissions for both transport and heat.

The UK Government has announced a ban on the sale of petrol and diesel cars by 2035, and the current alternative modes of transport are battery electric or fuel cell electric vehicles. Fuel cell electric vehicles are powered by hydrogen and produce only water in the exhaust, thus eliminating the emissions that are currently being emitted by petrol and diesel vehicles. Whilst many organisations such as the National Physical Laboratory (NPL), taxi firm Green Tomato and the Metropolitan Police have recently taken up hydrogen vehicles, many battery car enthusiasts appear to be condemning fuel cell electric vehicles (including Tesla CEO Elon Musk who refers to fuel cells as ‘fool cells’). However, there are several advantages of fuel cell electric vehicles including a range in excess of 350 miles from one fill, a refuelling time of within three to five minutes and according to Toyota the lifecycle emissions are better than battery vehicles. NPL owns a hydrogen car (a Toyota Mirai) and staff have remarked that it operates very similarly to the conventional petrol or diesel car. Whilst this ‘battery vs. hydrogen war’ is probably to be expected, especially with car manufacturers appearing to favour one technology over the other, the main focus should be the move away from petrol- and diesel-powered vehicles, so at this stage there is no need for any competition as there is room for both technologies to grow. This mentality is enforced at NPL at least where scientists are currently working on advancing both hydrogen and battery vehicles.

In addition to decarbonising transport, hydrogen also has a part to play in decarbonising heat, and the first step being planned is to inject hydrogen (up to 20 per cent) into natural gas. This percentage amount fraction is widely accepted as a safe level at which no changes would need to be made to the existing gas grid or domestic appliances, whereas higher amounts could lead to issues with corrosion and reduced performance, respectively. Looking to the future however, for 100 per cent hydrogen to be used consumers would need to buy ‘hydrogen ready’ boilers. These 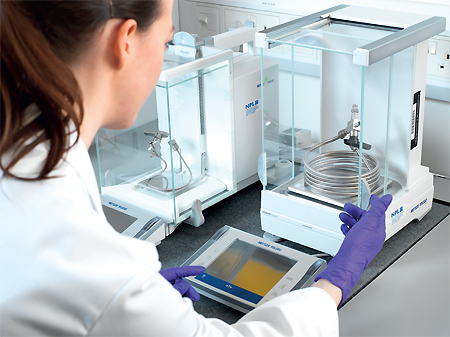 boilers would need to be designed to work with natural gas but easily modified to work with hydrogen when the switch happens. Interestingly, the UK was in a similar position when we successfully converted the gas grid to supply natural gas instead of town gas 50 years ago.

Converting and introducing hydrogen on a large scale is not straightforward and does create technical challenges. NPL is the UK’s National Metrology Institute (NMI) and is focused on solving any issues related to gas quality and purity when introducing hydrogen to heat and transport. NPL supplies Primary Reference Materials (PRMs) to the natural gas industry, underpinning the gas quality measurements that they perform. NPL participates in key comparisons with other NMIs worldwide, to demonstrate their ability to provide traceability for gas composition. As gas measurements are currently used to measure the energy content of gas (and therefore determine how much customers are charged), it is important to get this measurement correct, and consistent with other countries we trade with.

Now that the UK plans to inject hydrogen into natural gas, NPL has developed a new suite of PRMs that reflect the change in composition. These PRMs are important for industry as they provide traceability for new gas analysis methods (for determining energy content) and are required to develop new accurate online analysers capable of monitoring hydrogen blend at the injection point.

Whereas in heat applications, gas composition measurements are used to determine energy content, purity analysis has another important role, which is to protect appliances or other devices against harmful levels of impurities. Recently the UK gas grid started accepting biomethane (which is essentially biogas cleaned up and converted to natural gas). However, there are some impurities that could be present in biomethane, and not natural gas, such as siloxanes. If siloxanes reach domestic boilers and cookers the consumer may experience a reduced performance over time thus shortening the appliance lifetime. Hydrogen vehicles require extremely pure hydrogen (unlike petrol or diesel engines) with even four parts per billion of sulphur destroying the fuel cell. This means the supply at refuelling stations needs to be carefully monitored. Refuelling stations need to ensure that the quality of their hydrogen complies with ISO 14687. If the hydrogen is not checked, or it contains high levels of impurities, the car that is being supplied could break down whilst in operation. NPL has developed the capability to perform purity analysis of biomethane and hydrogen and has also made good use of its on-site hydrogen refuelling station (owned and operated by ITM Power) to make improvements to its high-pressure sampling techniques and validating online purity analysis instruments.

In addition to directly supporting the energy industry through providing PRMs and gas quality measurements, NPL has carried out research work to support the introduction of hydrogen gas to the grid. If we switched to hydrogen, we would still need to odorise the gas to help customers quickly identify a gas leak. NPL through the SGN Hydrogen 100 Programme has performed extensive laboratory studies to confirm that existing odorants used today for natural gas can continue to be used with hydrogen in the gas grid. NPL is also currently working with Cadent Gas to understand whether it would be feasible to supply grid hydrogen to hydrogen refuelling stations as part of the Hydrogen Grid to Vehicle (HG2V) project. Being able to do this would open up the hydrogen market by allowing a hydrogen refuelling station to quickly be installed anywhere in the country where there is an existing gas supply. Currently, there are not enough stations to support the existing hydrogen vehicles market, so the work of HG2V could be a game changer for the industry.

All of these opportunities present alternative options to the current transport and heating markets that could aid in meeting the climate change targets.