A little more than a decade after entering the North Sea, Apache Corporation is opening a new chapter with first oil from the Forties Alpha Satellite Platform (FASP) expected in the second half of 2014.

Commissioning of the newest platform at Forties comes as Apache celebrates its 60th anniversary. Since it was established in 1954 with $250,000 of investor capital and a goal to become a profitable oil corporation, Apache has developed its capabilities to become one of the most successful independent oil and gas exploration firms in the world. A member of the Fortune 500, Apache’s market capitalisation is approximately $37 billion on the New York Stock Exchange; this incredible growth over the last 60 years stems from strategic expansion into burgeoning oil and gas areas as well as acquisitions. Today the company has nine operating regions across the globe and presently has a global production of over 635,000 barrels of oil equivalent per day (boepd).

Since entering the North Sea through a strategic $680 million acquisition of the Forties field from BP in 2003, Apache has invested in drilling activity, facility upgrades and an intensive re-evaluation of the field to find a significant increase in the proven reserves originally purchased. At the time of the acquisition there were 140 million barrels of oil equivalent (boe) of proven reserves, yet Apache has since produced more than 200 million barrels from the Forties field, and anticipates many millions of barrels are still be to found.

Following the success of the Forties field, Apache expanded its foothold in the North Sea with its acquired ownership of the Beryl complex, which included the subsea fields of Ness, Nevis, Skene and Buckland from ExxonMobil in January 2012. This agreement also included the SAGE gas plant and its pipeline as well as non-operated interests in the Maclure, Scott and Telford fields.

Apache’s North Sea average annual production presently sits at 71,000 boepd and their lifting cost per barrel is below $18 per barrel. This high level of performance is being driven by; the maintenance of a great safety record, acquiring new seismic, significant drilling activity, major project investment and the best operational efficiency in the North Sea. 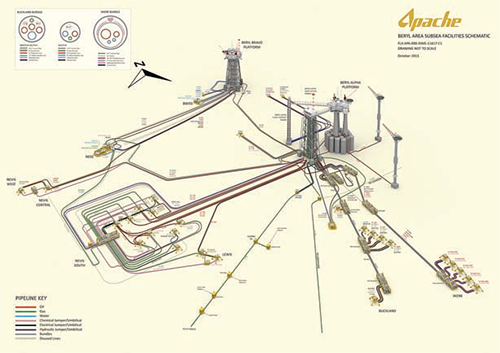 With under 500 personnel onshore managing the fields, the relatively small workforce has further strengthened its collaboration and communication capabilities by moving into the new Caledonia House on the state-of-the-art business park at Prime Four in Kingswell, close to Aberdeen, a world-class hub of activity for the energy industry.

With 25 per cent of the development wells drilled in 2014 in the North Sea in Apache’s portfolio, the subsurface teams have been busy and very successful in finding new targets and continuing to focus on producing new oil opportunities from its hubs. This year saw a total of seven operational drill strings across the two fields, with drilling being undertaken from every platform at some point during the year.

FASP, the new platform, was constructed by British manufacturer OGN on Tyneside. It is linked to the existing Forties Alpha platform via a 90 metre bridge and includes a 12 pile jacket and deck weighing a total of 18,000 tonnes that stands in a water depth of 106 metres.

The FASP has added 18 new well slots to accommodate further drilling opportunities with a processing capacity for 25,000 barrels of oil per day, production and deep gas lift gas compression and 25 megawatts of additional power for all the field through the Forties Power Ring Main.

At press time, the Rowan Gorilla VII was on location, drilling the first well at FASP. “The facility is best in class when it comes to the delivery of projects,” highlights Mark Richardson, Apache Projects Group Manager. “It won the Oil and Gas UK award for business efficiency; it was built at significantly lower cost than most North Sea platforms, demonstrating that we can still build platforms in the UK.” The award recognises the tireless work of both Apache and OGN over the last three years of planning and construction, and the efficiency, innovation and sustainability in the delivery of enhanced performance, streamlining and cost effectiveness.

Meanwhile, in line with its constant commitment to safety, Apache recently installed a new Subsea Isolation Valve in the 36 inch Forties Pipeline System to improve safety on the Forties Charlie platform. From concept, through fabrication to completion of the installed the valve onto the BP export pipeline, took four years. The final tie-in was completed during the 2014 Forties Field maintenance shut down and was commissioned two days ahead of plan, while the Turnaround (TAR) overall was completed one day ahead of plan; it was a highly successful project. An investment of £60 million to ensure the safety of their people and assets is a significant marker of how important major accident prevention is for Apache.

With a turnover of approximately $2.7 billion dollars in 2013, Apache North Sea has generated significant cash flow to Apache’s global capital programme due to its prolific subsurface, drilling and project activity and its ability to maximise and monetise opportunities for production. Apache doesn’t have any special technology, vendors, equipment or systems that aren’t available to other companies operating in the North Sea; the Apache success as one of the best producers in the region stems from their attitude and approach towards doing business. Apache have achieved a very high rate of return on their assets, which has been achieved through clear leadership and very competent teams with the will to undertake active campaigns.

Within Apache there is a culture of open accountability, where personnel are given the responsibility and authority to make the right decisions for the business, where the best answers win. To aide this approach Apache has a very flat management structure with a solid management team that have worked together for a long time. They understand progression and success is about taking managed commercial and technical risks to deliver results. If Apache sees a good opportunity that will move the bottom line they implement an action plan.

Looking ahead, Apache will continue with its focus on operational efficiency; this includes an ongoing focus on production through the utilisation of a very competent and capable operations and maintenance team. Apache has an impressive portfolio of opportunities around the Forties and Beryl fields that will start to be exploited with two additional semi-submersible drilling assets, with 20 new wells drilled this year and even more planned next year. Apache is continuing to look to invest in the ideas of the personnel who are in the best position of ensuring that the company moves from strength to strength, and it will continue to explore what’s possible.