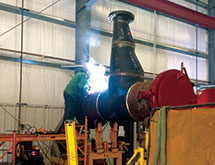 The Marcellus Shale region has become one of the most exciting areas of the country when it comes to the oil and gas industry, and it has created numerous opportunities for experienced operators or service providers. One such service provider is pipeline fabricator Appellation Pre-Fab, which has reaped the benefits of the activity in the Marcellus Shale region. President William Lee Emick says the company specializes in helping oil and gas operators get their product from point A to point B much faster by fabricating in the shop.

Emick is a 28-year veteran of the pipeline industry, and had worked with numerous big-name contractors before making the decision a few years ago to go into business for himself. He says that with the knowledge he had of building pipeline projects and the connections he had with many oil and gas operators, Appellation Pre-Fab was able to hit the ground running. “They set me up and got me some projects, and we did a million dollars in the first year,” Emick says. “I knew that I could save the client money by pre-fabricating in a controlled environment helping to speed up production on the job.”

In a relatively short time, Emick and Appellation Pre-Fab have established a strong client base of repeat customers operating in the Marcellus Shale region. Emick says the company has built strong relationships with many of the top operators in the region, which is a testament to the strength of the company’s services. “We do a lot of repeat business,” Emick says. “We produce a good product for a fair price that they like.”

Full Capabilities
Appellation Pre-Fab’s services are centered on pipe fabrication, and installations, which the company can accomplish in the shop or in the field. The company’s fabrication capabilities range from 2 inches to 42 inches in diameter. Emick says the company typically begins a fabrication project just after the drilling portion, when it sets up piping assemblies and can handle all production piping on the site on its own. This includes virtually every aspect of piping, including running gathering lines to compressor stations. Emick says being able to accomplish so much in the field is one of the biggest advantages Appellation Pre-Fab offers to customers. “They like that we can handle all aspects of the project,” Emick says.

In addition to fabrication of pipelines, Appellation Pre-Fab also specializes in installation and repair, along with hydrostatic testing and sandblasting/ coating. The company also provides piping skid packages.

Keeping Up With Trends
Emick says Appellation Pre-Fab has undergone some substantial changes just in the short time it has been in business, thanks to the oil and gas industry’s changing requirements. “The industry itself is relying on the contractors to do more construction management,” Emick says.

This increase in demand for construction management services stands to benefit Appellation Pre-Fab because of the expertise the company has in-house, Emick says. “That’s one big upturn I see,” he says, adding that more clients are turning to the company to provide all aspects of their pipeline projects.

Complicating matters somewhat is the fact that the industry is growing at the same time much of the skilled workforce is starting to age out of the industry. Even though this puts Appellation Pre-Fab and other companies at a disadvantage, Emick explains, the company’s in-house expertise remains strong and will be sufficient to continue meeting customers’ needs for the foreseeable future.

Another significant trend Emick sees that should benefit Appellation Pre-Fab in the years to come is the fact that infrastructure in the Marcellus Shale region remains relatively underdeveloped. Without many major pipelines, oil and gas operators will turn to fabricators such as Appellation Pre-Fab to help them keep up with their production. “Right now, they’re concentrating heavily on increasing infrastructure to get the gas that they have drilled to market,” Emick says.

Despite the cold winter season, Emick says Appellation Pre-Fab is doing well at the moment, with activity higher than the previous winter. With the company’s ability to provide a complete suite of services under tough conditions, Emick says he believes the company is poised to experience a highly successful 2015.

“It’ll probably be one of the busiest years since I’ve been in business,” Emick says.