Over the last decade the storage terminal market has grown considerably, with modern and up-to-date storage facilities playing an important role across a number of industries.

AS BCT, or Baltic Chemical Terminal, is one of these facilities, which is located in Estonia and used for the storage and transportation of UAN (urea-ammonium nitrate solution) and liquid ammonia.

Reflecting the rapid growth in the chemical terminal market, AS BCT has only beenoperating for around five years. Despite that, thisyear the business hit an important milestone – reaching and surpassing the figure of 2 million tons of chemicals handled on site.

To find out more about the success behind this milestone, particularly bearing in mind its relatively short timeframe, European Oil and Gas recently spoke with Aleksandr Volohhonski, who is the chairman of the board of the organisation. He explained: “AS BCT terminal is a high-tech transshipment facility of aclosed and fully automated type. Following anenvironment-friendly concept the terminal was designed with the use of the most innovative technologies allowing the handling of over a million tons of ammonia and similar amount of UAN solutions. These aspects, as well as maintaining our clients’ business and confidence are the key to our success.

“We do not just try to offer the cheapest or simplest method for transportation, but rather take into account the special requirements of each client separately,” he stressed. “Our service is closely connected with the third party co-operation (port authorities, railway, safety department, government etc.) and thus we always are in dialogue with all parties involved. This method of business organisation is the basis of our strategy, and it plays a significant role in our overall success.” 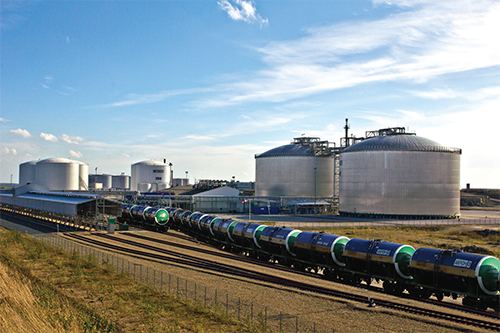 To offer its clients the best possible service, AS BCT provides a modern and advanced chemical terminal facility. On site there are four UAN tanks capable of holding 20,000 tons each, two tanks for liquid ammonia, each of 30,000 tons capacity, railway unloading areas for UAN and ammonia, with unload speeds of 600t/h and 130t/h respectively, pipelines to quays for UAN and ammonia, two marine loading arms with a loading rate of up to 1200t/h and deep-sea berths up to 13 metres. To ensure operation of this equipment at its optimum level AS BCT also has an MCC building with a power substation, administration and utility buildings and various pump, generator and fire fighting facilities.

Maintaining safety on site is crucial for AS BCT, particularly given the volatile nature of UAN and ammonia. Aleksandr commented more on the company’s safety procedures: “Provision of the highest safety standards is the basis of our operating philosophy. Even in negotiations with partners we use the phrase ‘safe service’. Our high standards are verified twice a year by the independent international organisation Lloyds RQA. Non-conformances were not found in the integrated safety system, which has built a prestigious reputation for AS BCT terminal. Our subsequent awarding with OHSAS 18001:2007 means that the terminal not only complies with all European rules and acts but also demonstrates our full concentration on providing the best possible service. Of course, in order to maintain these standards, safety improvement at BCT will remain the key operational challenge.

“It is important to mention that all of the vital systems are technologically duplicated,” he continued. “At the terminal all levels of safety, from individual to mass systems including residents alerting, are in permanent operation. We also organise practical exercises that are performed twice a year in close co-operation with the national safety and emergency authorities departments, as well as with the authorities of the Port of Sillamae and Estonian Railway. From a legal point of view AS BCT’s services are fully insured, which makes clients and service providers more confident in their partners’ selection. All of the aforementioned procedures and certifications ensure AS BCT is known as a reliable partner in the field of safe, efficient and sustainable liquid fertilizer transshipment.”

Through maintaining such high standards in all areas of its organisation AS BCT has achieved a considerable growth in its business, and at the same time cemented its reputation in the industry. “The major highlight for us is the fact that our annual turnover has been increasing year after year since the terminal was put into operation, and we are pleased to thank our clients and our partners for this continued business,” said Aleksandr.

AS BCT’s clients are based in Russia, the end users of UAN and ammonia products are predominantly based in the US, South America and Northern Europe. While covering a number of areas they are largely companies in the chemical production and agricultural industries, such as chemical plant operators/owners and farmers.

Importantly, looking into the future Aleksandr explained that he expects these markets to remain fruitful in the coming years: “When you take into account our turnover figures over the last two years or so then it is clear that the market remains stable at present. Looking ahead it is clear that mineral fertilizers will remain vital, particularly for the agricultural industry. As soils become depleted in the course of agricultural exploitation and levels of the macronutrients required for healthy plant growth decreases, liquid fertilizers are applied to enhance the crop yields and to provide peak efficiency. Bearing that in mind, the transshipment of these materials will remain stable, and in the coming year will certainly increase.”