With its headquarters and main fabrication yard located on the south coast of Norway in Grimstad, and additional fabrication yard present in nearby Arendal, AS Nymo has been a fixture within the oil and gas industry for more than 40 years.

A cornerstone company within the region, with a workforce of more than 300 employees, the business is today recognised as a full-service engineering, procurement and construction (EPC) 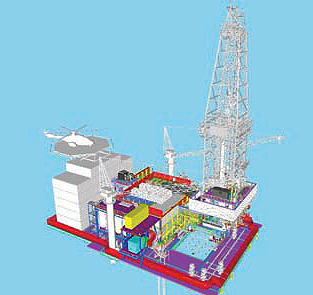 Offering total solutions to its customers, Nymo’s success has been built on its reputation for versatility, reliability, quality service, timely delivery, strong project management and its commitment to HSE. Boasting a dedicated and highly skilled engineering department, the company has also benefitted greatly over the years from the strong relationships it has built with key Norwegian drilling equipment suppliers.

As well as the extensive experience it has in the design, procurement, construction, transportation and installation of drilling and mud modules, the company is also well versed in the designing and building of accommodation modules, gas turbine exhaust and inlet systems, and subsea units.

“The company’s main business over the last five years or so has been in the drilling rig sector, delivering projects to customers around the world,” explains Einar Aanonsen, Nymo’s director of projects and marketing. “In recent years it has delivered drilling modules to Azerbaijan, the Caspian Sea, Germany and Singapore. In addition, Nymo has also delivered four drilling and mud modules to China.

“In the vast majority of cases these projects begin at Nymo’s Grimstad site where the company carries out the engineering, fabrication and testing phases. Upon completion, the company manages the transportation of the modules to their destination on specialised transportation vessels, before finally assisting in the assembly and installation phase.”

In January 2012, Nymo, alongside its consortium partners Cameron, Siemens and M-I Swaco, signed an important contract with the company OSX for the construction and delivery of two complete drilling package units that will be permanently installed on two wellhead platforms in the Campos Basin in Brazil. Nymo’s responsibility here will be to carry out the design of the drilling modules, incorporating the substructure, three mud, bulk and cementer units, the procurement of equipment and materials, and fabrication and pre-commissioning. Following pre-commissioning the units will be dismantled and loaded onto Nymo supplied heavy lift vessels and transported to the OSX yard in Pontal do Parana. Here Nymo will supply resources to assist in the hook-up, assembly and commissioning of the units.

“One of the largest single contracts signed by the company to date, it represents more than 30 per cent of the total project value. This is really a huge breakthrough for Nymo within the rapidly developing Brazilian oil and gas market,” Einar continues. “On a first hand basis you can see an increasing number of drilling ships being lined up and constructed in order to serve the Brazilian market. In addition, it is quite clear that at this stage of its development Brazil lacks the necessary capacity to carry out the type of engineering and fabrication that these units require. As a result, companies such as Nymo and its consortium partners can meet the growing needs of its customers and continue to excel.”

Another area of significant development for the company is the work of its rig harbour, which has itself earned recognition for work carried out on FPSOs, jack-up accommodation platforms and other offshore units. One of the largest undertakings that the company is currently carrying out is the upgrading, repairing and maintaining of the Sevan Voyageur on behalf of Sevan Marine: “Awarded in 2010, this particular contract has the company installing a gas compression plant into the vessel, while also expanding its water injection capabilities,” Einar states. “Upon completion the Sevan Voyageur will be put to work on the Huntington field, operated by EON.

“This represents just one of a number of major contracts carried out by Nymo’s rig harbour, and the company envisions this side of the business only getting stronger in the years ahead as more and more of the industry’s aging drilling rigs require modifications and repairs.”

Buoyed by the market reports and the results of industry analysis that suggest that the global oil and gas market will grow at a strong pace until 2015, stabilising then at those levels until 2020, Nymo’s goals for the future are clear: “The fundamental task now for the company is to continue to develop its EPC and rig harbour capabilities, while at the same time providing the support and services that its customers demand, be it in established markets or developing regions like China and Brazil,” Einar concludes.