Back to Features > Atomic attitudes

Whatever happened to the Nuclear Renaissance? By Vince Zabielski and Elina Teplinsky

Whatever happened to the Nuclear Renaissance? By Vince Zabielski and Elina Teplinsky

Remember the nuclear renaissance? The spectre of global warming drove new-found enthusiasm for nuclear power; plans were made to deploy a new generation of nuclear reactor designs. Construction of the first of these modern reactors began in 2005 at Olkiluoto in Finland, followed in 2007 at Flamanville in France. In the United States, new reactor designs commenced limited construction at Plant Vogtle in 2009 and with two more breaking ground in 2013 at the V.C. Summer plant. In the UK, starting in 2008, potential new build projects were identified at sites in Somerset, Wylfa, Moorside, Oldbury, and Bradwell.

However, none of the plants mentioned above has generated a single kilowatt of power. Olkiluoto 3, which was meant to enter service in 2009, is projected to be on line sometime towards the end of 2018, 13 years after construction started and bearing a price of €€8.5 billion – € €5.3 billion of which is cost overruns. Flamanville 3, expected to start operations in 2018, is six years late and at least €7 billion over budget. In the States, the VC Summer plant has been abandoned after $9 billion was spent, and the Vogtle units are struggling with cost and schedule overruns. In the UK, the Hinkley Point C project in Somerset is the farthest along, with some initial ground works underway, and a planned operating date between 2025 and 2027.

Elsewhere in Europe, nuclear power is being phased out: Germany and Switzerland are phasing out nuclear, whilst even France will be reducing its reliance on nuclear energy. Making things even more difficult for European countries with plans to pursue new nuclear, Austria has vowed to fight any new nuclear projects anywhere in the European Union.

So, is it safe to say the nuclear renaissance is dead?
Looking at the West, many indicators would say yes. However, new nuclear construction is surging in the East. Of the more than 50 reactors under construction today, the vast majority are in the East, including 20 in China, seven in Russia, five in India and four in the UAE. Additionally, the UAE is well on its way to completing a four-unit project; Turkey is close to beginning the construction of its first plant at Akkuyu; and countries in the MENA region, such as Egypt, Jordan and Saudi Arabia are in advanced planning stages for new nuclear.

The fundamental difference between the East and the West when it comes to nuclear power appears to be largely one of will. In China, high energy-demand growth and record air pollution are such great issues that the country is deploying all available clean energy sources to address these concerns. In India, where GDP grew by an impressive 7.1 per cent in 2016 alone, additional baseload capacity is desperately needed to power the country’s rapidly expanding industrial base and burgeoning population. In the UAE and Saudi Arabia, both countries rich in energy resources, the Governments realised that every barrel of oil they burned to generate electricity was one less barrel available to export. These Governments all made a conscious and thoughtful decision to pursue nuclear power and its many benefits.

The West, on the other hand, has for the most part ignored the important climatic benefits of nuclear energy. In the United States, subsidised solar and wind energy, combined with the abundance of cheap (but greenhouse gas emitting) natural gas have forced less economical singleunit nuclear plants to prematurely shut down. Germany, in a knee-jerk reaction to the Fukushima Daiichi incident, decided to phase out its nuclear programme with little consideration of the long-term climactic impacts.

So, has the East beaten the West?
Not yet – thanks to the UK. In the UK, the Government has taken climate change very seriously and has recognised the advantages of carbon-free nuclear baseload generation. The same contract-for-difference (CfD) scheme used to ensure the viability of wind and solar projects is being used to fund nuclear new build. The CfD scheme provides the developer of a nuclear project with a guaranteed price for the electricity generated, greatly simplifying the economic analyses.

The UK is also supporting other important initiatives to build the country’s nuclear skills. The Education & Skills Funding Agency has developed nuclear apprenticeship programs. The UK Government has committed to invest in a nuclear research and development programme as part of its wider energy innovation initiative, which by 2021 will reach over £400m per year. In November 2016, the UK launched a £20 million research programme supporting innovation in the domestic industry, including advanced fuels, next-gen technology (including small modular reactors), materials, and manufacturing methods. The Government is even sponsoring a competition to identify the best value Small Modular Reactor. In a nutshell, the UK is poised to become a major powerhouse in the global nuclear renaissance – if she keeps her political resolve. 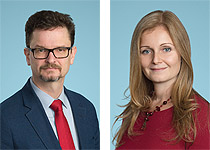 Pillsbury Law
Vince Zabielski is a senior lawyer in Pillsbury’s energy practice, and Elina Teplinsky is a Partner in Pillsbury’s energy practice. Pillsbury Winthrop Shaw Pittman LLP is an international law firm with offices around the world, and a particular focus on the technology, energy & natural resources, financial services, real estate & construction, and travel & hospitality sectors.

The world’s largest zero-emission haul truck made its debut on May 6th, powered by creative engineering...

ABB has won a large order for its highest payload Koepe production hoist, associated infrastructure, and...

OPITO, the leading global safety and skills organization for the energy industry, and the National Offshore...