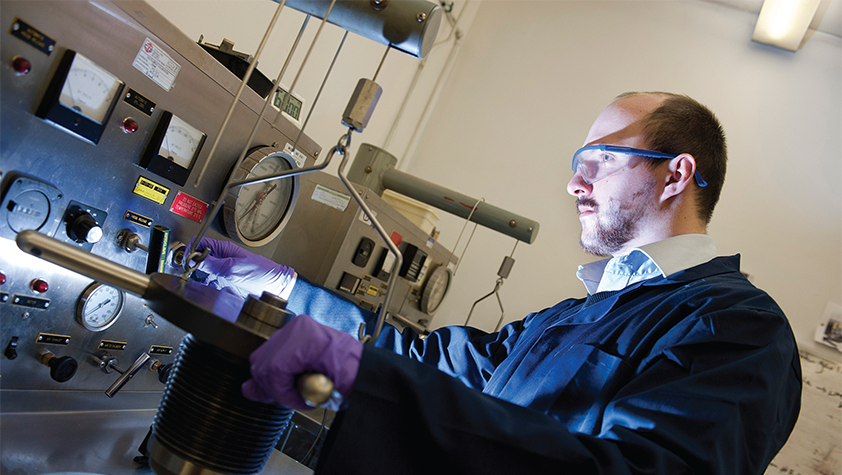 Privately owned independent designer, develop and supplier of chemistry related technology Aubin has experience of working as a partner with clients in the oil and gas industry to find solutions to specific difficulties and help them achieve strategic goals.

Based in Ellon, near Aberdeen, the company has a solid understanding of oilfield issues and has five core activities: cement and stimulation, pipelines, subsea, specialities and services.

Aubin traditionally supplied cement and stimulation chemicals, most of which have been sold to clients in the Middle East, but started working in the growing decommissioning sector a number of years ago. “We developed a product called an L-gel pig, which is essentially a pig made out of a tough gel-like material that has the principle feature of being able to diminish in diameter when it goes through a restriction and then become bigger again once it comes out,” says Paddy Collins, purchasing and logistics manager. Older pipelines tend to be contain a lot of debris or may have variable diameters, causing the requirement for a compliant product that won’t get stuck like standard pigs. “Towards the end of their life, pipelines need to be de-oiled, cleaned, degassed or treated with water and they need to be cleaned with a minimum amount of chemical or fluid to prevent a lot of dirty water at the end of the decommissioning. There is a real benefit to using the gel pig as it is much less aggressive to the site and can clean out the line far more efficiently than a standard pig treatment,” adds Paddy.

There has been particular demand for gel pigs in the Middle East, which is partly down to new concerns for the environment and oil and gas companies behaving more responsibly. As projects continue in these geographical areas, fields need to be revitalised with new equipment and old equipment must be decommissioned. As this market continues to grow, Aubin aims to continue to develop skills, techniques and technology to take to other parts of the world, such as the Gulf of Mexico and the Far East, where there is potential for future decommissioning work, as Paddy explains: “With the requirements of legislation and a greater awareness and concern for the environment, companies have to think of reputational issues. This has led to projects being set up in a more structured way than in the past.”

Working in all areas of field life, from well construction to decommissioning, Aubin considers all areas of production when coming up with solutions. Its products are developed by identifying the requirements of customers and focusing on the delivery of an environmentally responsible solution that will be safe and efficient in the field. One such product is the DeepBuoy, a patented low-density fluid that will impart buoyancy to structures underwater when pumped into subsea vessels. Enabling a new approach to variable buoyancy, it has features such as 550kgs/m3 density, virtual incompressibility, which means there is no change in buoyancy regardless of depth; a pumpable fluid that enables buoyancy to be added and removed subsea and the capability to operate at depths up to 2000 metres and beyond.

“The DeepBuoy is a simple idea, similar in density and lift to syntactic material, instead of a solid it is a liquid, which means we can control subsea objects by making them float or sink, or buoyant. Items will be much easier to move or position so there are opportunities for recovering items in areas where it is harder to get existing installations,” highlights Paddy. For this product Aubin will be looking at the decommissioning market for the DeepBuoy as it can offer operators or owners of an asset the flexibility to fit the project into their timeline. “This product will save costs and streamline projects, allowing things to be done in the order the client wants to do them,” says Paddy.

Traditionally working with clients on projects in the North Sea, Aubin is now supplying in the Middle East, West Africa, parts of South America, Norway and South of Europe, as well as the Far East. “We are looking at applications from literally around the world as we expand both in commissioning and the decommissioning field,” says Paddy. It is the UK’s leading supplier of gel pig technology, with all of its resilient and highly elastic pigs approved by CEFAS for use in the North Sea. The gel has been used successfully in decommissioning activities and Aubin is in discussions with customers in the East Shetland Basin for projects to extend the life of existing fields. “It looks like decommissioning but we will be sealing elements of their existing facility that are now redundant to ensure safety and extend the overall lifespan of the field so work can continue,” Paddy elaborates.

The technology Aubin has developed has immense potential for oil and gas companies in the UK and other parts of the world, and there are future products in the pipeline. “We are developing a non-hazardous water based material to be used with divers,” explains Paddy. “We hope this material will make the diving process safer by using a gel that doesn’t expand or contract regardless of depth.” With products being created for a growing and ever changing market the future is positive for Aubin. “The sky is the limit for us; there are a lot of exciting developments happening,” Paddy concludes.