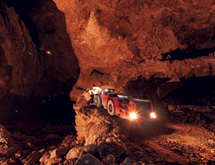 A Canadian junior mining company, Aurcana Corp. is a primary silver-producing company that is fast becoming an emerging senior silver producer. The company is in position to grow because of the potential of its existing mines in Mexico and Texas.

One of the company’s existing mines is the La Negra mine in Queretaro State, Mexico. Aurcana owns 99.9 percent of the La Negra silver-copper-lead-zinc mine.

“Initially, it was thought that La Negra had a short life left,” says Lenic Rodriguez, president, CEO and director. “We have found that there are many resources left there, as they have increased more than 20 times in October 2012 when we have updated our resources. Even after this significant increase, La Negra still has a huge exploration potential. We feel enthusiastic about it, as there is a lot of evidence of mineralization, which most recently also includes gold.”

Extended Life
Historically, the mine was discovered and developed by Industriales Peñoles S.A. de C.V. It began production in 1970 and produced until being put on care and maintenance in 2000. Aurcana subsequently acquired La Negra Peñoles, placing the mine back into production in 2007.

In August 2012, Aurcana released a new NI 43-101 report, identifying 115 million ounces of measured and indicated silver underground. This gives the mine an expected lifespan of another 30 years.

The exploration potential is strong because there are many zones open at depth. Infrastructure is already in place and includes power provided by existing power lines, company-owned housing and access to available water. In addition, all permits and agreements are in place and there is strong local support for the project.

Earlier this year, Aurcana announced the results of a 2012 surface-mapping program at La Negra. The program sought to map and sample the upward projection of the known mineralized zones within the mine.

In addition, the program focused on identifying new, untested exploration targets related to promising northwest and northeast mine trends. About 420 hectares were mapped at 1:2000 scale and 1,117 samples were collected from skarn and intrusive outcrops.

The exploration program at La Negra has defined six exploration targets. Each of the targets show some presence of gold and are associated with strong silver, lead and zinc values. Each is within skarn comparable to areas that are currently being mined. Some have encouraging metal groupings, including copper, lead, zinc, silver and gold.

Large Capacity
La Negra is not the only property that Aurcana believes it can rely on. The company’s other mine is the Shafter Mine in Texas.

Aurcana owns 100 percent of the Shafter silver mine, which is located in Presidio County in the southwest part of the state.

Aurcana acquired Shafter in 2008. The mine has all necessary infrastructure in place, as a major power line and paved highway cross the property. In addition, there is an electrical substation on site and a 1,050-foot shaft serviced by an 80-tons-per-hour hoist, as well as more than 5,000 feet of underground development.

According to the feasibility study, Shafter’s annual production is forecast at 3.8 million ounces silver recovered once the mine and mill are operating at capacity. When it is running at full steam, Shafter could be the second-largest producing pure silver mine in the United States and could supply 10 percent of all U.S. silver.

“We are bringing in some additional equipment to Shafter, and we expect to be increasing production later in the year,” Rodriguez says.

“We expect to have substantial increases in revenue and silver production of silver, and we expect to reach capacity at Shafter in the first quarter of 2014,” he adds.

Exploration will continue at both La Negra and Shafter. As studies are completed, updated resources will be announced. In the meantime, Aurcana will continue to focus on future growth.

Because of the potential of both of its properties, Aurcana believes that it is in a strong position to realize its organic growth potential. The company is confident that its existing mines will help it successfully pursue its goals as it looks to emerge as a senior silver producer.

“In the short term, low metal prices are a concern, but we are a low-cost producer and are very efficient and productive,” Rodriguez says.

“We know we will have to engage in some feasibility studies and improve our plant and equipment to accommodate larger production levels,” he continues. “Over the next three to five years, we expect La Negra to be producing as one of largest underground mines in Mexico.”