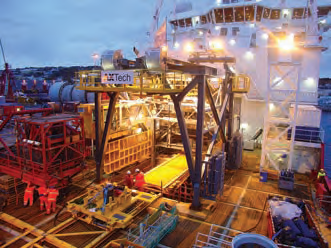 Since it was last featured in European Oil and Gas Magazine in November 2012, Axtech AS has solidified its position as a leading supplier for heavy lifting and handling equipment.

The company is proud of its reputation of delivering high-quality heavy lifting solutions for use in harsh and corrosive marine environments.

AXTech’s profile has been raised internationally with the award of several significant projects. In 2012 the company was contracted by Technip Norge to supply a special handling system (SHS) of 400t capacity to be used during the installation and intervention of Statoil’s Asgard Subsea Compression system. The contract was valued at approximately 17 million euros with delivery of the SHS expected in the first quarter of 2014. “There is a lot of worldwide attention on the project,” explains Richard Myhre, managing director of AXTech.

“Things are progressing very well. We are in the fabrication phase for the project just now and it was a critical and key milestone to get to this point. It’s a huge project, as a tower of this size and magnitude has never been built to handle modules of this size. The technology in the tower is not unique on its own, but together as a system it is fairly innovative. The winches and the performance they are able to offer are probably of the largest ever built,” he adds.

The Technip Norge project presented its own challenges, which AXTech was able to discuss with Technip Norge and develop solutions for. Owing to the sheer size and weight of the modules, weighing in at around 300 tonnes, it was near impossible to use normal handling solutions. As such, early on in the project the company designed a special tower crane to enable the deployment of the project’s massive modules. The new crane tower design was deployed on North Sea Shipping’s North Sea Giant Vessel, which was given the accolade of Ship of the Year Award in 2012 by the Offshore Support Journal, during its Offshore Support Conference in London.

AXTech has continued to focus on providing innovative, high quality engineering solutions, and recently it worked with Subsea 7 to provide the architect equipment for its Seven Viking Vessel. The company provided a full inspection, maintenance and repair (IMR) system for module handling including active heave compensation (AHC) and an active rope tensioning system (ART). The vessel is considered to be the next generation in IMR vessel design and was celebrated this year when it was awarded the Ship of the Year Award, presented at the Nor-Shipping Exhibition. For AXTech the recognition of the Seven Viking’s capability is an impressive achievement. “We installed and commissioned a unique system for Subsea 7,” says Richard. “The equipment we have supplied is critical for the function of the vessel. So the Ship of the Year was a big milestone for us,” he concludes.

The IMR system was produced to operate at the significant wave height (Hs) of 4.5 meters and incorporates a range of specialist features and designs. The main lift winch can operate up to 70T to a 2000m depth and includes AHC/ART functionality and an all-electric drive. The system also includes an auxiliary lift winch operating to a weight of 20T to a depth of 1000m and three guide wire winches capable of 10T to a depth of 2000m. Finally there is a cursor guide winch capable to 10T with Sync/Art functionality. AXTech designed the system to be able to offer synchronous operation of the main and auxiliary winches as well as the cursor guide winch, and synchronous operation of all guide wire winches. “The system has proven its ability to perform as expected during extensive sea trials and load tests prior to official delivery, and the client seems to be very happy with the equipment so far,” says Kjell Ødegård, sales director at AXTech. “This delivery is an all-electric system, but we do of course also deliver the same systems with hydraulic drives,” he adds.

AXTech has its main office based in Molde, Norway, where it is strategically placed to be close to the country’s oil and gas fields. As the company has expanded it has included a subsidiary in Gdynia in Poland, operating as Axtech Polska and has a local office located in Kristiansund. It also works with agents in the US, Brazil, and Malaysia. Moving into 2013 the company has identified Singapore as an important future market, opening its own office in the country in January of this year. While AXTech still operates with agents and reps globally, its aim is to be able to offer a more direct service to its customers, including support from sales through to post delivery support. “2013 will be a year of consolidation,” says Richard.

“For the next three years we expect to see steady, controlled growth. We intend to strengthen the business step by step and part of this is to continue to focus on engineering skills,” he continues. “One of the main focuses is on engineering leadership. Our focus is on having project-leading engineers who can make decisions in the way the company wants them to. With that kind of focus you can get progress and engineering integrity. We want to build a more firm and solid structure and based on that take another leap forward in the future.”