Having pioneered the use of ball and taper technology in the offshore oil and gas industry through the development of the sector’s first ball and taper pipeline recovery tool, subsea mooring connector and the Morgrip connector, it was in 2004 that current majority shareholder Bob Emmett founded Balltec. 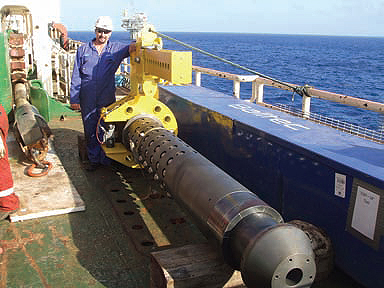 Established as a vehicle for the further development of the technology, the company today supplies the most technologically advanced range of products in its field.

Balltec’s success has been built upon that of its core products, including the MoorLOK subsea mooring connector; the only subsea connector in the world that requires no ROV intervention upon insertion, LiftLOK bespoke lifting devices and its range of PipeLOK pipeline recovery tools. The latter product is supplied on a rental basis and in the eight years since Balltec’s formation the company has assembled a vast range of recovery tools, covering every pipe size from 4” to 48”. Balltec’s track record for pipeline recoveries is second to none.

Balltec’s test facilities, developed to allow in-house testing of its products, comprise a 2500mT vertical test rig and 1000mT horizontal rig. Over the last few years these facilities have been opened up to external clients and the company has developed bespoke equipment for testing shackles, kenters, swivels, chasers and other mooring hardware, including break tests on chain.

“The last twelve months have seen the company expand and move into new markets with the development of the world’s first surface controlled integrated subsea heavy-duty chain tensioner and the award of a contract to supply bespoke tether connectors and tensioning systems for a mid-water buoy on a major project in Brazil,” states Russell Benson, managing director of Balltec. “Meanwhile, Balltec’s internal product development has continued and developed beyond ball and taper technology with the impending launch of its BendLOK diver-less bend stiffener connector and the as yet un-named weld-less pipeline repair coupling, later in 2012.

“Our BendLOK bend stiffener connector will provide a simple, fail-safe locking device for connecting bend stiffeners to I-tubes or J-tubes. It allows fully automatic engagement and disconnection (no need for divers or ROV intervention) and has a simple, maintenance free female part connected to the FPSO. We have also developed a riser pull-in tool that allows automatic release, not dependent upon shear pins or hydraulics, to be used in conjunction with the BendLOK connector.”

Our new pipeline coupling will offer a metal-to-metal grip with a separate metal seal. It offers a fully weld-less solution and does not require any pre-machining of the pipe. Suitable for all diameters of pipe and not limited by wall thickness or external coating, an additional advantage offered by this product is that it does not leave any obstruction inside the pipe bore. It is smaller and more compact than other weld-less pipe repair couplings and offers a cost effective solution to the problem of sealing pipes in the field.

Involved in projects in just about every oil and gas region on the planet, Balltec has offices and a dedicated workforce in the UK and the US, as well as agents in North Africa, the Middle East and Australia.

“The core strengths of Balltec are without question its workforce and its unique facilities,” Russell continues. “Even in the face of the rapid expansion we have gone through in the last two years, the company has maintained the sense of togetherness that helped establish it in the first place. Furthermore, the relocation of the company to a new 40,000 square foot workshop facility, along with the installation of a number of overhead cranes, the largest having a capacity of 30mT, has allowed Balltec to execute larger and more complex projects.”

Balltec has most certainly achieved a great deal in recent times. In 2011, it successfully completed the installation of 41 subsea mooring connectors on Total’s Usan field in Nigeria: “This was the company’s single largest MoorLOK project to date and required the development of six different designs of connector to provide mooring solutions for the FPSO, SPM buoy and oil offloading lines,” Russell highlights. “Following a rigorous qualification exercise, the installation of all these connectors was completed without any issues over a six month period.”

The company’s successful product range and the potential of new products saw it attract interest from new investors, a development that led to the sale of a third of Balltec’s shares to Scandinavian consortium Kenna Invest in September 2011. This sale, and the subsequent investment, has significantly helped fund the company’s current wave of expansion.

The sale of a large percentage of its shares has in no way put paid to Balltec’s enthusiasm for introducing new products and solutions to the market. In fact, the 2012 launch of its BendLOK diver-less bend stiffener connecter and the weld-less pipe coupling, along with a new design of drill slip handling tool that is set for launch in 2013, are expected to open up huge new markets for the business, further proving the validity of its commitment to continual research and development.

“Taking advantage of our resources, we are now planning to invest more into our sales and marketing activities in order to raise awareness of the technological benefits our equipment can offer,” Russell enthuses. “In the past the company’s approach to sales has been largely reactive, relying on word of mouth to spread interest in its products. By taking a more proactive approach we will be able to reach new clients, thus increasing sales of its existing solutions. The ultimate aim for the company is to make as much of the industry as possible aware of the facilities and resources we have available and to leverage this so as to become involved in more large, bespoke projects.”

The focus for the future is to build upon its hard-earned reputation in order to raise awareness of it products and services: “Balltec’s products will provide the solid foundations needed to allow it to grow into a subsea service provider and execute larger projects,” Russell explains. “In the meantime the company is keen to get involved in more FEED studies so it can look for further opportunities to use its engineering resources to find the answers to the problems this industry faces. The combination of Balltec’s production team, its carefully selected supply chain and world class facilities allow it to manufacture virtually anything and will allow it to follow up FEED studies by supplying the same type of high quality, high complexity equipment it is known for today.”