Master of the seas

The oil and gas industry has long been one associated with innovation and the introduction of state-of-the-art technology, but for one business an innovative idea to solve an existing problem was the very genesis of its foundation.

That idea was the brainchild of Martijn Koppert who, through his own experience of working offshore, realised the inherent challenges and dangers that existed in using cranes on floating barges and other vessels. The idea, which was to stabilise the entire crane on the barge without the use of jack-up legs, is known as Barge Master.

In 2008 Martijn set up the company together with partners Jan-Paul van den Bos and Frans van Seumeren. Van Seumeren, former CEO and co-owner of heavy lifting company Mammoet, saw the advantages and potential of the Barge Master system. He became shareholder and face of the company and chairs the supervisory board.

“The standard flat top barge is the workhorse of marine engineering in the near- and offshore environment, and I have worked on many projects using this equipment in various locations around the world,” Martijn explains. “In these types of operation I always encountered the same problem: the motion of the waves causes the barge to move, the stability of the crane is lost and this results in a dangerous swinging load when carrying out any lifting work.

“In fact, just a small movement of a few degrees can be extremely dangerous as it leads to a pendulum effect – when the load on the crane starts to swing due to the moving of the barge. This leads to the crane swinging in a wide arc, even swinging the load over the deck of the vessel, which can be highly dangerous for those on board. From this experience I had the innovative idea of stabilising the whole crane on the barge, and thus, the Barge Master was born.” 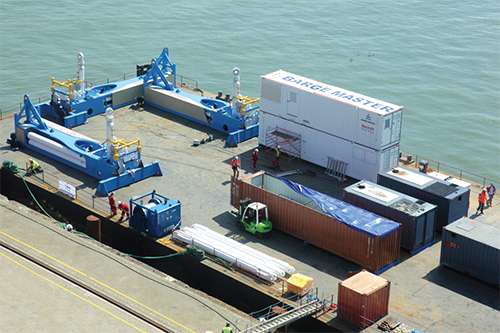 Barge Master’s hydraulic platform has been designed to compensate sea-induced motions during offshore and near-shore maritime work. Essentially, a floating barge or vessel has six degrees of freedom (DoF) that need to be compensated against. Three of these (surge, sway and yaw) are compensated by using traditional anchors or a modern Dynamic Positioning system. The remaining three DoF (heave, roll and pitch) are compensated by Barge Master through the use of three hydraulic actuators. By controlling these actuators, which are in place to provide the counteractive motion, and measuring the heave, roll and pitch, the platform remains still relative to the fixed world.

To develop the idea further Martijn approached Bosch Rexroth and MARIN Maritime Research Institute to become partners in the project, the former to help design and develop the control system for Barge Master and the latter to use its test facilities for the ultimate testing of design ideas and prototypes. This was from 2008 to 2011 and was essentially a period of consolidation and testing during which the Barge Master performed excellently.

In February 2011 the scale model tests for the C400 Barge Master were completed with testing results demonstrating excellent motion compensation percentages. In regular waves with a significant wave height of 1.2 metres and wave periods ranging from 6-12 seconds roughly 95 per cent motion compensation was achieved.

“Since that point we have been building the Barge Master, with a payload capacity of 700 tonnes” Martijn explained. “We are currently mobilising the whole machine onto a barge at the port of Rotterdam, the Netherlands, with the mobilisation work being carried out by Mammoet, and if that goes as smoothly as predicted then we expect to commence the first sea trials mid September 2012. These will start with the whole barge concept being tested in and around the port area before heading out into the North Sea for its first proper test simulations.”

Thus far the development of Barge Master, from Martijn’s initial idea to the mobilisation of the first product, has been highly successful. In fact, Martijn is confident that the system can be used for a number of applications once active: “The Barge Master we are building right now can be used all over the world, and it has many applications that have been suggested by potential clients. For example, we’ve had people asking if we can place a drilling rig on it, or a conveyor system for certain applications, or if it can be used to just hold a load for supplying platforms and the answer is often yes because Barge Master allows any load to be stable at sea, hence improving operations considerably.

“I’m very confident in the future of Barge Master, and we are already looking at the future development of a range of machines from smaller types to those that can carry 1000 tonnes. For us, the most important aspect is to always deliver a safe and efficient motion compensation platform to our clients that can improve their operations and increase their workability. Barge Master is more than capable of this as not only can it do that but also it is easy to mobilise and demobilise globally, is easy to ship, is cost-effective and is not a fixed asset so is efficient, so it really is a truly innovative development,” he concludes.