Since its inception in 2007, Houston based niche drilling firm BassDrill has enjoyed substantial growth, which has increased massively over the last 18 months.

Formed to design, fabricate, market and operate safe and efficient drilling equipment in a heavily dominated market, the company has quickly become a strong competitor with its offering of state-of-the-art vessels, as Kerry Kunz highlights: “BassDrill entered this market because we saw an opportunity to provide new and innovative designs to customers requiring safe, efficient and comtemporary drilling units. We started with registering the company in 2007 and in 2008 we ordered our first barge tender assist vessel, the Alpha, which was built on speculation and delivered in 2010 before being mobilised in West Africa where it has worked continuously since.”

In late 2009 the company began interacting with Petrobras over the prospect of a large development project in the Campos basin, Brazil. In 2010 a long-term contract was signed and soon thereafter BassDrill began with the construction of its second unit, the semi-tender Beta, for mobilisation to Brazil; the vessel of which is being built in China for delivery in H2 2013, while the modular drilling equipment was constructed in the US. “The Beta will be the first semi-tender assist unit in Brazil and we believe further opportunities will appear in Brazil for this type of unit in the future,” says Kerry. “In the fall of 2012 we ordered a third unit, which again will involve the vessel being built in China and the modular package being produced in the US. The ‘Gamma’ unit is being built on speculation and is scheduled in the third quarter of 2014; similar to the Alpha, it is a barge tender with a 30 per cent increase in capacity. It is being built under a $124 million turnkey construction contract with Dalian Shi building Industry and Dalian Shipbuilding Offshore, China. 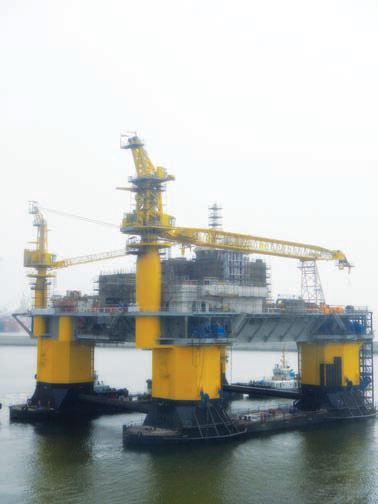 All three tender assist designs are ABS class approved, with the two barge designs intended for benign environments in shallow waters of 15 metres to 200 metres; the semi-tender design, meanwhile, is configured for use in deepwater environments in conjunction with Spars or TLPs, as Kerry highlights: “The semi-tenders are able to operate in more challenging environments, not the North Sea, but they are able to go into deeper water and beyond the traditional tender assist areas, which expands the market. For example, the unit in Brazil is going into an area that is 31 degrees south latitude in the Atlantic, so we have taken this tender market well beyond its traditional exclusive area within equatorial waters.”

Focused completely on development drilling, the company tends to benefit from longer term contracts and the ability to build against contracts, something that Kerry is keen to continue doing: “If you first secure a contract and build against it, this is heavily applauded by shareholders because it a much more secure option than building on speculation and financing is readily available. We have been uniquely successful in building vessels against contracts and this is how we would prefer to move forward whenever possible. It offers more security to grow and a much safer route for the shareholders of BassDrill.” The company holds long contracts due to the number of wells that the developments require, which offers increased stability in terms of revenue, financing, budgeting purposes and manning.

In early 2013 the company secured a contract for a fourth unit with Total Congo for a high profile deepwater development; the semi-tender vessel, Delta, is an enhanced version of the Beta design and will be utilised on the Moho Nord development commencing in 2015. Looking to continue its spate of aggressive growth, the company is currently interacting with operators on additional potential opportunities. “We came into a market that was traditionally dominated by large players, which made it challenging to obtain our first contract because we hadn’t proven ourselves in this business. Our first contract showed the industry that we could bring new and innovative designs with the latest technological features to offer operators the safest and most contemporary vessels on the market,” says Kerry.

Having enjoyed huge success over the last few years, the company plans to continue bringing new vessels into the market while also focusing on the offshore industry, with substantial demand seen in areas such as Brazil, West Africa and quite possibly in the future, the GOM. Utilising its semi-tenders, Beta and Delta, BassDrill offers oil companies considerable cost savings on total development costs, where dry trees/surface are utilised. Tender and semi-tender drilling rigs also have significantly less weight requirements than platform rigs, thus allowing oil companies to build lighter and less expensive TLPs, Spars or fixed platforms.

“The deepwater developments we are involved in have surface trees and surface wellheads, which offers significant benefits over wellheads located on the seabeds as it removes the need for expensive and sophisticated equipment that goes with sea floor development,” highlights Kerry. Surface wells heads are often required where flow assurance is an issue and re-entering of the wells is required on a frequent basis. Surface wells permit the operators to use inexpensive means to perform remedial work on the wells without the use of an expensive deepwater rig. “The trend is to look at more marginal fields or fields with flow assurance issues with the application of surface developments that could prove to be cost effective, which will translate into huge opportunities for Bassdrill. We are on track with our plans for growth and are very positive about the future.”