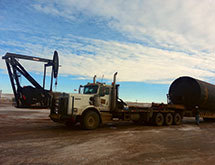 For more than 20 years, Blac-Frac Tanks Inc. has supplied the oil and gas industry with services ranging from water trucks to cement mixing to heavy-duty hauling. Providing customers with the most convenient services has been part and parcel of the company’s success, and that’s why Blac-Frac Tanks recently made the move to open a location in North Dakota aimed at serving customers in the booming Williston Basin region. North Dakota Operations Manager Ron Rogacki III says the move is consistent with the company’s dedication to providing the best service to operators in the oil and gas sector. “Any service that they need, we can supply,” Rogacki says.

Founded in 1994 and boasting more than 100 years of combined experience among its senior leadership, Blac-Frac Tanks owns a fleet of more than 50 vehicles and nearly 300 tanks. The company has its own fabrication department, allowing it to provide virtually any type of service oil and gas customers might need in the field.

Rogacki says the success of the fracking industry in recent years has meant a lot of competition for Blac-Frac Tanks as many other tank and trucking companies have moved into the market. Even though the company faces some serious competition, however, Rogacki says Blac-Frac Tanks has the expertise and the skills necessary to be highly successful, and its recent entry into North Dakota will further solidify its position as one of the leading oilfield services companies in the country.

Full Service
The opening of its new shop in North Dakota in 2013 has made a significant impact on how Blac-Frac Tanks serves its customers in the Williston Basin region. First and foremost, Rogacki says, it provides the company’s mechanics with a central location to service trucks without having to work on them out in the field. “It definitely helps our mechanics so they don’t have to be out there working in 40 below,” Rogacki says.

In North Dakota, as in the many other service areas the company operates in, Blac-Frac Tanks brings a singular focus on providing the highest level of service possible. Whether the company supplies testing services, welding and fabrication, or hydrovac services, Rogacki says Blac-Frac Tanks does so with the same devotion to providing customers with specialized and specific service.

“I think one thing we do better than most is our service, and one reason for that is that we’re not as big as some of the others, so we can focus better than if we were huge and spread out all over the place,” Rogacki says.

‘Controlled Chaos’
One of the biggest challenges Blac-Frac Tanks faced as it established itself in North Dakota was in setting up the infrastructure that would help it serve its customers in the region. Rogacki says the company has become a much more professional organization over the last year, but the level of activity in the Williston Basin likely means the company will continue to deal with more “controlled chaos” in the near future.

The other significant challenge the company has experienced in North Dakota has been in finding qualified employees. Rogacki says the labor pool in the state is extremely limited due to the heavy activity in the Bakken Shale and other areas, leaving the company to find other alternatives. “There’s literally no unemployment rate here, so anyone who wants a job here has a job,” Rogacki says.

To keep its North Dakota operations fully staffed, Blac-Frac Tanks has relied on recruitment agencies and word-of-mouth to attract qualified employees. The other side of the coin is making sure that the people the company already has stay with it.

Still Growing
In the future, Rogacki says, Blac-Frac Tanks expects the level of activity in the Williston Basin to remain high, although the currently low price of oil may become a factor in 2015. The company also expects the level of competition in the region to remain high. “The companies that are still here are the ones who are going to be here for the long haul,” Rogacki says.