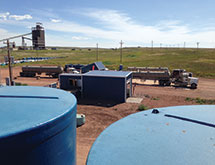 Private saltwater disposal company Black Bison Water Services sees big things happening in the Powder River Basin of Wyoming. “We follow the permitting activity for oil and natural gas and the numbers have been picking up rapidly,” says Justin Haigler, president of the Casper, Wyo. company. “There are increasing numbers of wells permitted to be drilled by oil and gas operators in this area.”

Haigler says Black Bison is “being contacted by oil and gas companies that are coming into the basin looking for support with water treatment and disposal. They project it’s going to be a nice play for oil and gas. So, they are moving rigs in to do testing and determine if the play will meet their expectations and need to do something with the water they will produce.”

Reaching out in advance “allows us to help them reduce costs and helps create a great relationship to move forward as exploration and production goes to a larger scale,” he says.

Major players that currently operate there – such as Peak Powder River, Chesapeake Energy, RKI Exploration & Production and Devon Energy – and many others work with Black Bison.

Flowback Disposal
Black Bison receives and disposes of produced water and flowback water generated by drilling operations in the Powder River Basin. It receives the water at the facilities it owns and operates and then treats and disposes of the water by injecting it into its wells 4,000 to 11,000 feet below the water table.

“This is the preferred method to dispose of drilling water,” Haigler says. In fact, “it has been the preferred method to handle oil and gas fluids for decades. We operate a Class 1 commercial salt water disposal (SWD) facility permitted by the Wyoming Department of Environmental Quality. There are many such sites across the country; but Wyoming is underserved relative to the number of oil and gas wells.”

Other companies dispose of produced water by dumping it into large pits where it evaporates. “That is not our method but it is still allowable in Wyoming,” Haigler says. Black Bison releases its clients of all liability for disposing of their wastewater at one of its wells. “We are the final destination for the fluids created during the drilling process where we re-inject them into highly engineered disposal wells,” he says.

Wild Wyoming
What are some of the biggest challenges for Black Bison? “It is a bit like the wild west out here,” Haigler says. “Towns are few and far between and good roads even fewer.” The logistics of eastern Wyoming are challenging, along with land ownership and geology obstacles. “We spend an insane amount of time and money on geology to determine where are the ideal locations to dispose, and we spend a ton of money to install the wells,” Haigler says. “We go to the greatest effort to make sure it’s right the first time.” Rather than relying on capped or abandoned wells, the company is drilling new wells for water disposal.

Black Bison emphasizes safety, environmental stewardship and economic benefits. As a newer startup company founded just a year ago, the three-site company strategically decided to serve the Powder River Basin instead of the Bakken Shale in North Dakota or other better known basins. “We went to our contacts at the E&P companies and asked them where they need our help and want us to deploy our capital and many told us Wyoming rather than better known oil plays. This helped us to be one of the first in the Powder River rather than a late arrival in the Bakken six to eight years late,” Haigler explains.

Haigler previously worked for National Oilwell Varco, where he designed, developed and sold disposal facilities. After observing business in the Bakken – where a rush to be the first in the area led to the placement of disposal sites at incorrect locations – he determined that proper planning and client interaction is needed for success. That includes organizing truck traffic and coordinating with customers, clients and landowners. As a native Wyoming resident, he also believes in sustainable business solutions.

“The market is changing right now,” Haigler says. “We do have competition in the Powder River Basin. They are good competitors and we enjoy working along with them to create a great picture of the disposal industry. It is going to take all of us to succeed and there is certainly enough business for all of us.”

“By combining the Garner Lake Facility with our Reed SWD Facility and the soon to be LeMay SWD Facility, Black Bison continues to position itself to be the Powder River Basin’s premier water disposal services business,” Haigler says. “We continue to look at additional locations for new facilities throughout the Powder River Basin. By outsourcing wastewater management and water disposal to Black Bison, our customers can focus their time, efforts and capital resources on what they do best, which is exploring for and producing crude oil and natural gas.”

It aims to hold its position as the largest commercial disposal company in the state, where is currently operating two sites round-the-clock with one permit to drill granted and another pending. These will be the first commercial disposal wells drilled in more than two decades, Haigler says.