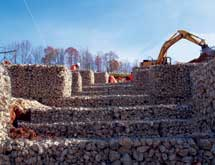 In today’s trying economic climate, the lowest price is often the final determination of who a client hires for services in the construction and mining industries. However, if prices are comparable and a company has a name synonymous with quality backed by decades of experience, that provider often wins out.

In the case of Bloomsdale Excavating Inc., the Drury family name is what brings clients back to the St. Louis-area contractor. President Scott T. Drury is at the helm of the business his grandfather launched in 1946, and the younger Drury takes great pride in keeping the family legacy intact for years to come.

“We are a very reputable contractor,” Drury states. “We like to say we’re affordably superior. If we’re just close [with prices], we’re going to get chosen because of our reputation and what we bring to the table with quality and our values, and the way we do things are very efficient.”

When he returned stateside from World War II, Marvin Drury named his fledgling firm Bloomsdale Excavating after the southeastern Missouri town where it was headquartered. Drury began excavating gravel from nearby creeks and delivering it to farmers in the region, and eventually the company expanded into drilling and installing public water supplies and sewage collection systems.

Sixty-seven years later, Bloomsdale Excavating offers site development, heavy civil, mining and environmental excavating services throughout the Missouri, Illinois, Indiana, Kentucky, Kansas and the greater Midwest region. Bloomsdale’s reputation was cemented in the mining sector, especially with regard to safety. In fact, the South Central District of the Mining Safety and Health Administration (MSHA) named its annual contractor safety award after Thomas M. Drury, former president and CEO of Bloomsdale Excavating and Scott’s father. His company became the first independent contractor to enter a partnership with the Mine Safety and Health Administration.

Digging Up New Business
Bloomsdale Excavating’s core competency has been and always will be mining, even when the economy takes a turn for the worse. In fact, the company maintains a large footprint in the energy and mining sector, especially with regard to quarry stripping. Today, frac sand is all the rage, and Bloomsdale Excavating is taking advantage of the boom by working on quarries and mines that produce the sand demanded by fracturing operators.

However, since the onset of the Great Recession in 2008, Scott Drury admits most of the markets Bloomsdale Excavating typically serves are not providing the company much business. This has forced the company to look into new industries to provide its excavation services.

For instance, Drury says the company has reentered the retail market by offering its site development capabilities to big-box retailers. He explains this isn’t so much a new market for Bloomsdale Excavating as it is a return to the sector, which was booming in the early part of the last decade.

Bloomsdale Excavating also has taken on more public-sector jobs in recent years, especially for state departments of transportation. In 2011, it was voted the medium-volume contractor of the year for the Missouri DOT.

Future of the Legacy
As the current caretaker of the Drury family business, Drury says his job as owner is to drum up more work so the Bloomsdale Excavating name lives on – even if that means spinning off sister companies to take on different lines of business. No matter how it happens, Drury’s strategy is to survive these economic times by being better at the competition in every facet of the game.

“There are a lot of contractors doing the same type of work,” he says. “To get through this, we need to be better than everyone else.”