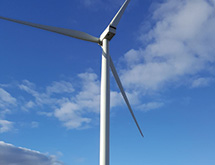 In 2006, many Northeastern states were building wind farm projects, but Connecticut had not yet stepped forward. But Chairman Paul Corey and President and CEO Greg Zupkus sought to change that by founding BNE Energy Inc.

Both men had been friends for nearly their entire lives. “We have known each other all the way back to grammar school,” Zupkus recalls, adding that he and Corey have experience in government relations.

Zupkus had worked for AT&T, while Corey had served as the executive director for Connecticut’s Department of Public Utility Control, now called the Public Utilities Regulatory Authority. When he left the law firm of Brown Rudnick, Corey saw the chance to develop wind energy in the state.

“No one else was doing it,” he says. “Greg and I felt there were suitable locations for commercial wind, and we decided to pursue that opportunity.”

“[Almost] all the New England states were building up wind, as well as New York and Pennsylvania,” Zupkus adds. “We started identifying locations, used software to identify land that would have sufficient wind resources and met with the owners to discuss concepts.”

The company has another property across the street that is permitted for three, but Colebrook South remains its first priority. “We’re focused on adding the third turbine to Colebrook South,” he says.

BNE sells the power from Colebrook South to Eversource, an electric utility in New England. “From the two turbines alone, they generate enough electricity to power 1,500 to 2,000 homes, which is almost triple the number of homes in Colebrook,” Corey says, noting that the town has a history of being green.

“There is a hydro facility in Colebrook,” he says. “But from our Colebrook South Wind Project, we’re producing more than double the amount of energy that is used in the entire town over the course of the year.”

Developing the Colebrook South project was a rigorous process for BNE, Zupkus admits. “First, we had to convince people it was viable,” he recalls. These included the Connecticut Clean Energy Fund and the Connecticut Siting Council. “We had people that understood we were trying to follow the mission of the legislature with green energy,” he says.

But others were not easily convinced. “We had some interveners that basically used [information] off the Internet,” he says, noting that these people claimed the wind farms would cause injury to wildlife and local residents.

Although the process lasted more than three years, “The good side is that the trail has been blazed now,” Zupkus says. “Future projects will move so much smoother through the state of Connecticut.”

Wind Partners
BNE’s partnerships are key to Colebrook South’s success. “We certainly formed a team of experts that worked with us to assist with the process,” Corey says, noting that these included associates from the Connecticut Clean Energy Fund and Webster Bank.

These partners also include GE, which provides “the most advanced wind turbines in the world,” he says.

This reflected the company’s philosophy of using only the best in the industry. “That’s how we built our team,” Zupkus says.

Supporting New Energy
Locals have reacted well since Colebrook South started operation. “People go up [to the site] and they want to see the turbines,” Corey says. “The excitement in the state is building.”

The company also is pleased with the recent extension of wind and solar power tax credits for five years. “That [will] be a tremendous boost to the industry,” Corey says. “The right incentives are in place and they’re important to the market in Connecticut.”

The state legislature, he adds, has been a leader in promoting zero-emission energy. “Their efforts have helped lead up to Colebrook South and the construction of wind turbines that are finally up and operating in Connecticut,” he states. “We expect Connecticut will continue to support renewable resources and spur the development of wind energy in the state in the coming years.”