Established in 1988, Controls & Electrics Pte Ltd (also known as Boustead C&E or CEPL) is a specialist in the design, engineering and supply of wellhead and process control & safety shutdown systems for the upstream oil and gas, and general process industries.

The company is a part of the Energy Related Engineering division of Boustead Singapore Limited – a company with a colonial past and a history of almost 200 years.

The heritage of Boustead C&E is impressive on its own merits though, with more than three decades and 300 cumulative man-years of experience in the control and safety of oil and gas production wells and processes. This expertise spans the entire range of upstream control solutions including wellhead panels, HPUs, ICSS, and SCADA systems. Key members of the company’s team, including managing director Dev Lodh, helped pioneer systems integration work in Asia way back in the 1970s. The team were also the first to design and build wellhead control panels – hitherto the domain of Western countries – in Singapore in 1979, which eventually influenced an entire niche industry in the country.

“Control and safety systems comprise a small percentage of the cost of a project,” begins Dev. “But they are at the heart of the process, and as such are mission critical systems where quality and reliability are paramount considerations to ensure that the huge investment placed in the plant or process is adequately optimised and control protected while also ensuring environmental safety. Boustead C&E is proud to be able to contribute to this niche area of expertise, and the strong and significant reputation it has established in the process.” 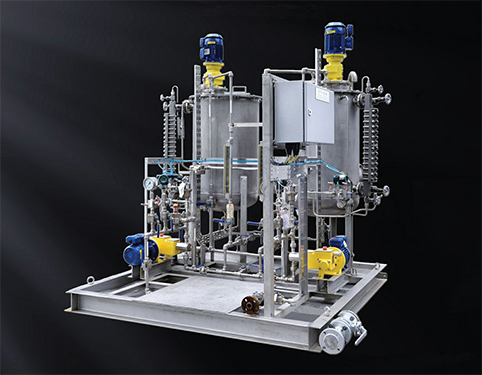 Most applications of wellhead systems require a custom-built product, as they are dependent on the field characteristics, which vary from country to country, and even between different regions. However, similarities exist, particularly in the ICSS systems, which enable the company to re-use certain control and functional strategies across different applications. On all fronts though the company strives to maintain the highest standards of quality in its systems in complete understanding and appreciation of the mission-critical nature of the applications it serves. As such, Boustead C&E’s procedures – fine tuned by decades of experience – are duly certified to ISO 9001-2008 by DNV, and its OHSAS 18001-2007 certification assures a safe and healthy work environment.

Over the years Boustead C&E has developed products that have evolved to have their own standing in the marketplace and become recognised as best-in-class by customers. “Comments such as ‘this is the best wellhead panel I have seen – truly World Class!’ or ‘You have a fantastic team handling my ICSS system,’ from satisfied customers are received often,” remarks Dev. The design philosophy of the company has always been driven by a desire for reliable, trouble-free and safe operation with minimum downtime. Describing Boustead C&E’s latest development activities, Dev says: “Research and development (R&D) is mostly on-the-job and towards ensuring that we continue to maintain and constantly improve on our product quality and processes. We are also now looking at creating pneumatic and hydraulic ‘functional logic modules’, which will make production faster and less prone to individual component failures.”

From a business perspective, the last few years have been good for the company with one of its highest order intakes for the 2011 financial year, although this slowed again in the first quarter of 2012. Enquiry levels are strong, and are being received from many non-traditional sources as well.

“We are presently executing a large project for the supply of many single and multi-well control systems, which, when fully completed and commissioned will control some 250 wells in Saudi Arabia, representing a significant percentage of the total number of offshore wells in the country. Another prestigious project going through the finishing touches is a very large HPU, together with well control systems, which will provide hydraulic power to a significant number of subsea wells in Brazil operating at pressures in excess of 12,000 psi. We’re also very proud of a recent project for the supply of an ICSS system for an FPSO that will be operational in Malaysia soon. The project was completed and delivered in record time,” elaborates Dev.

Other products/systems the company supplies include fuel gas skids and chemical injection skids – initially developed for in-house applications for a Group company for various customers in Algeria, Australia and Brazil etc. – and now also available to other end users, though on a limited scale for now.

Based on these examples alone, at a glance it is easy to see that Boustead C&E’s solutions have penetrated far beyond its home market. Having already succeeded in this worldwide coverage, Dev concludes with the company’s plans for building on these foundations: “With a single manufacturing base in Singapore, we have supplied systems that control several thousand wells and many FPSOs in South & S.E. Asia, the Middle East, Africa, Australia, and South America. Our applications and customers are already global. In the next five years we plan to capitalise on this acceptability and track record further to make C&E a truly global company with several facilities and service centres dedicated to specific regions.

“We have recently established a subsidiary in India, which, over time, will handle much of the engineering and services for the local oil and gas industry, where incidentally we are the clear market leader with some 70 per cent of the country’s offshore oil wells being controlled by our systems. We will also be activating a branch office in the Middle East soon, which is likely to be expanded into a fully-fledged manufacturing unit. This is only the start,” concludes Dev.