With almost 150 years of experience behind it, Breman Machinery has extensive knowledge of working with metal.

The grounding for the company was laid by Harm Breman in 1864 as a forge, and then following the Second World War moved into making weaving machinery. As the stock of machinery slowly expanded, so the focus shifted to the supply of spare parts, and particularly work-pieces with unusual dimensions.

“Today we’re a specialist in the supply of large components to the offshore and heavy machinery industries,” describes Henk Breman, managing director. As the fifth generation of the Breman family to take the helm, Henk has maintained Breman Machinery’s reputation for taking on challenging projects. This includes everything from simple structures to complex mechanical components that weigh tens or hundreds of tonnes, and other extremes of dimension. Yet each is made to a precision of a hundredth of a millimetre.

“Our core strength is our people and their workmanship,” Henk continues. “We currently deliver a lot of heavy components for drill ships, crane equipment, and handling equipment for the installation of offshore wind turbines. In fact at present we are working on a wind turbine handling system that weighs over 300 tonnes in total to a very short lead time of just six months.” The company also has clients within military, aerospace, and general industry such as machine builders and mechanical engineers.

What is somewhat unique is that Breman Machinery can fabricate these components and structures entirely in-house. The company’s 25-metre high workshops are home to all the necessary equipment for machining and non-machining processing of materials including rolling, boring and milling, welding, corrosion protection, assembly and fitting. Its location beside open water also means that it has a direct connection to international ports such as Rotterdam and Amsterdam. 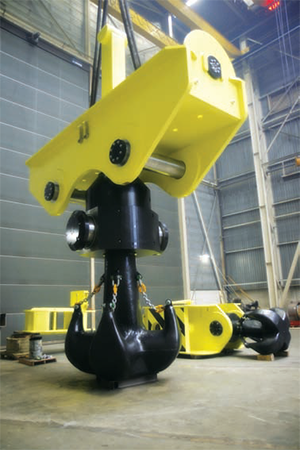 “Often the first question we get is ‘can you make this kind of unusual product’,” notes Henk. “We are very strong in making extreme components and work in a niche market fabricating parts that are often far from the norm. A lot of the design and development work is done by the customer so our aim is to try and realise those dreams.”

Breman Machinery prides itself on the scope of its facilities, which include a wide range of CNC-controlled machines. These are essential to enabling the company to form its large pieces with the greatest precision to conform to the accepted tolerances. Although the structures themselves may be complex, many of the manufacturing processes performed by Breman Machinery are quite typical such as cutting and angle bending. It also means that the company is more flexible by not having to rely on third parties. In fact it is Breman Machinery that often gets certain processing operations outsourced to it by mechanical engineers and plant manufacturers that regard the company as a subcontractor.

Earlier in the year Breman Machinery brought a new RX18 machine from Reiden Swiss for use in milling, turning and boring. This investment is expected to be delivered at the end of the year. “We have an in-house policy that we don’t have to get bigger as a company, but we do invest to be a better company. This type of machine is very sophisticated and much faster so it presents a lot of possibilities, and we feel will gives us a better position on the market,” elaborates Henk.

“We have also invested in a whole new factory at IJmuiden, which will be home to our new sister company – Breman Offshore,” he continues. “The site is positioned right on the sea enabling us to supply large ships, and to create heavy and large projects which can then be more easily transported.”

With the company viewing the offshore industry as being a key growth area, both from the oil and gas and renewable energy perspective, this facility represents a major strategic decision. “Our aim is to be able to provide even larger components in the future,” concludes Henk. “We also want to not only be able to provide the steel work, but also hydraulic and electrical competences for a more complete component that customers can just plug and play. This will remove some of the challenges of production because the client can just subcontract a complete system from Breman Machinery.”