WHY HYDROGEN CONVERSION IS A VITAL STEP ON EUROPEAN POWERPLANTS’ ROAD TO NET ZERO. BY PROFESSOR EMMANOUIL KAKARAS

Europe stands at the brink of a historic clean energy transition. On July 14, 2021, as part of its European Green Deal, the EU Commission committed the European Union to slashing its carbon emissions by 55 percent, based on 1990 levels, by 2030. Even more ambitiously, the deal promises to make Europe ‘the world’s first climate-neutral continent by 2050’.

These are worthy goals, but to achieve them, Europe must decarbonize power generation.

The energy sector has already made excellent progress, cutting emissions by 54 percent between 1990 and 2020, but it is still responsible for around a quarter of all EU emissions. Getting to net zero will require new forms of fuel, innovative technologies and novel approaches to generation and transmission.

Renewables such as wind and solar will, quite rightly, play a major role in this transition, but to meet the growing demand for energy while building resilience of supply, we will continue to need thermal power generation. Except this cannot, and must not, come from coal or oil.

In many markets, nuclear power has been relegated to a supporting role, but in any case, nuclear plants can take ten to 20 years to build. We cannot wait, we need to accelerate decarbonization now.

Fortunately, there are alternatives. Natural gas and hydrogen are viable, lower carbon transitional fuels. Gas has already helped us cut emissions by shifting away from coal, and the new EU taxonomy commendably allows the continued use of gas for power generation – if it is mixed with hydrogen.

More good news is that hydrogen power generation technology is ready, right now. Deploying it at the scale and speed required, however, will call for vision and courage from politicians, power generators and regulators, as well as demand from Europe’s citizens.

Hydrogen’s rich potential and immediate benefits
When you burn hydrogen as a source of power, the only by-products are water and warm air, with zero greenhouse gas (GHG) emissions. Of course, this does not mean there are always zero emissions across the entire value chain, as some may result from the process of producing and transporting hydrogen. But if the hydrogen is produced using renewable power, those emissions may well be exceedingly close to zero. Plus, hydrogen from other sources is still a far lower-emission energy stock than any available alternative, bar wind and solar.

Mitsubishi Power Gas Turbines are a good example of the kinds of technology that will be able to use hydrogen to generate electricity, as there will be units capable of running on a mix of 30 percent hydrogen and 70 percent natural gas, available as soon as 2025. The moment a generator switches to burning hydrogen, they achieve an instant reduction in their CO2 emissions.

This improved environmental performance is also a necessity because of the rules set out in the EU Taxonomy for Sustainable Activities, from 2026, power generators may only run gas turbines if they use at least 30 percent hydrogen in their fuel mix. By 2030, this rises to 50 percent. Switching to mixed gas-hydrogen generation means European gas power plants can remain compliant and keep operating in the years to come, with the long-term potential to switch to 100 percent hydrogen. This is good for consumers, who benefit from an exceptionally reliable, lower carbon or zero carbon power source, and good for operators, who can maximize the lifetime of their equipment and see a better return on investment (ROI) from their gas facilities.

Hydrogen also solves one of the thorniest problems of the switch to renewables: What to do with energy generated when the wind is blowing, or the sun shining, but there is not enough demand to justify running renewable generation facilities at full capacity?

Right now, this energy often goes unharvested, which is a huge waste – and conventional batteries will not be able to solve this problem any time soon. To be viable as grid storage, they will have to come down in price by an estimated 90 percent, and make more significant progress in terms of capacity.

Fig 1. How excess wind and solar energy can be integrated
into gas-hydrogen power generation 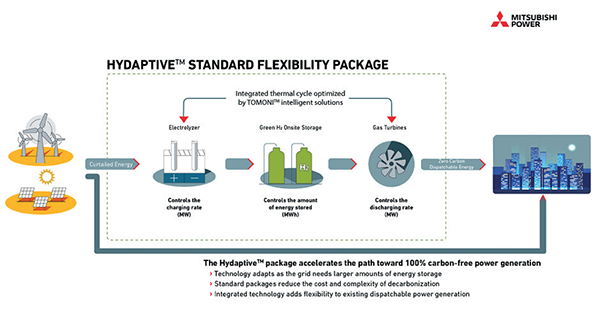 Yet this excess renewable energy could be used to create hydrogen, which can then be stored until demand peaks or there is insufficient wind or sun to generate power. At which point it can be used in mixed gas-hydrogen turbines, and eventually, pure hydrogen turbines, to generate electricity without producing significant GHG emissions. This idea is being put into practice at the Intermountain Power Plant (IPP) in Delta, Utah, USA, which will operate two Mitsubishi Power M501JAC power trains, using renewable power to produce hydrogen through electrolysis, with the hydrogen being stored in an underground salt dome at the site.

Mixed-gas hydrogen generation today and tomorrow
It is also much more straightforward than one might expect to renew and upgrade existing gas power plants to burn a mixture of up to 30 percent hydrogen and 70 percent natural gas – just by converting burners and some associated equipment, so hydrogen can be mixed in before it reaches the combustors.

Mitsubishi Power J Series Gas Turbines also have the world’s highest level of power-generation efficiency, enabling a 65 percent reduction in CO2 emissions when compared to coal-fired plants – and this is when they are running on 100 percent natural gas. With 30 percent hydrogen in the mix, that reduction rises to approximately 75 percent. As the percentage of hydrogen increases, so will the reduction in carbon emissions. And the proportion of hydrogen will increase over time, as Mitsubishi Power continues to refine its turbine technology, enabling the generators to use less gas in the mix.

Mitsubishi Power is currently working to develop turbines capable of running on 100 percent hydrogen, due to be available commercially by 2030, which will also be demonstrated at the planned Takasago Hydrogen Park. The Takasago facility will be the world’s first center dedicated to proven hydrogen-related technologies, from hydrogen production to power generation. The park will be co-located at the gas turbine development and manufacturing facility of Mitsubishi Heavy Industries’ (MHI) Takasago Machinery Works in Hyogo Prefecture, Japan.

Investing in new infrastructure testing and development facilities like Takasago, now – around the world, is essential, because in the mid- to long-term, the increased use of hydrogen in power generation is likely to promote the growth of a domestic hydrogen industry – including in Europe. As an example of how this will work, Mitsubishi Power plans to buy electricity from renewables operators’ excess generating capacity, to create hydrogen and then store it. Hydrogen created in this way, from renewable electricity, is known as ‘green hydrogen,’ as it is close to emissions-free.

Admittedly, right now, there is not the excess renewable-power capacity available to produce green hydrogen in this way domestically. Demand for renewable electricity is also currently able to absorb all the wind and solar power Europe generates, but this leaves us with a chicken-and-egg situation, which is worth resolving. Establishing a larger domestic hydrogen market in Europe that can absorb excess renewable energy, will incentivize solar and wind investment, which in turn further incentivizes investment in European hydrogen turbine upgrades and infrastructure.

A secondary solution is natural gas conversion, to create ‘blue’ hydrogen. Rather than being created using electrolysis powered by renewables, blue hydrogen is produced by a process called Steam Methane Reforming (SMR), in which natural gas is heated in the presence of steam to produce two main end-products: CO2 and hydrogen.

The CO2 is then sequestered using Carbon Capture, Utilization, and Storage (CCUS), preventing its release into the atmosphere. In a recent interview, Dr Mijndert van der Spek, Associate Director of CO2 utilization at the Research Centre for Carbon Solutions at Heriot-Watt University, said: “With modern CO2 capture technologies, virtually all the CO2 produced in the hydrogen plant can be mitigated and, therefore, blue hydrogen can play a key role in the transition to a carbon neutral society, until there are sufficient renewable resources to produce green hydrogen in the large amounts needed”.

We need to invest in infrastructure and new standards, today
Hydrogen power generation delivers multiple benefits. It creates extra revenue streams for renewable power providers, improving the efficiency of, and business case for investment in, renewable power. It solves the storage problem that sees renewables sitting idle at times of high potential generating capacity but low demand. Plus, it enables utility companies to extend the service life of the turbine, improving the overall economics of conversion.

Also, because hydrogen powers exceptionally reliable, large-scale thermal power generation, it helps ensure baseload demand is always met, stabilizing the energy grid. Both these benefits make it easier to adopt renewables, and to increase their share of generation faster than would otherwise be the case.

Now, for any of this to happen optimally, we need robust standards and new infrastructure. Without these, power companies will not have the certainty required to invest in hydrogen turbines or infrastructure at scale. Nor will we see the investment in hydrogen power required to achieve the carbon-neutral, secure, independent, and affordable power generation Europe needs to guarantee its future prosperity.

The creation of standards – around areas such as hydrogen infrastructure, hydrogen turbines and hydrogen conversion, among others – is something that legislators, regulators and industry bodies can start doing right now. We believe it is just too important a task to delay. The creation of a European hydrogen economy will support the successful decarbonization of Europe, and a socially just energy transition which prioritizes affordability and security of supply. Achieving this relies on universal standards, which all stakeholders – generators, regulators, legislators, insurers, consumers, and others – accept and understand.

MHI EMEA is engaging and collaborating with our colleagues across the energy industries, in pursuit of these vitally important goals. We hope you too can work alongside us, to help build the secure, lower carbon power generation Europe so urgently needs.