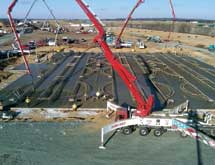 In the year 2000, Mark Lewis went on a sales call hoping to close a $1 million deal for his family’s concrete business, Lewis Construction Inc. The 22-year-old Lewis met with David Nadler, closed the concrete sale and in the meantime ended up buying Nadler’s company, Cedar Falls Building Systems Inc. (CFBSI).

With the help of his father, the founder of Lewis Construction Inc., and his brother, Lewis slowly took over CFBSI. Over the next year, Nadler helped Lewis transition into his new role as president of CFBSI. The two companies cooperate in most projects, with Lewis Construction providing the concrete for projects developed by CFBSI. Today, Lewis has solid proof that he closed a great deal during that sales call 13 years ago. “The first year we made about $200,000; we are now in the $30 million to $50 million a year range, in combined revenue from Lewis Construction and CFBSI,” Lewis says.

CFBSI has two sales offices, the original headquarters in Menominee, Wis., and a second office in Chippewa, Wis. A design/build contractor specializing in commercial and industrial construction projects, it has experience building warehouses, office buildings, stores, banks and a variety of buildings for commercial applications.

CFBSI is a Butler builder, a company that provides pre-engineered metal building systems. The company has received many awards from Butler, including the Number One Volume Builder of the year in 2011, and Million Dollar Builder and High Performance Builder awards that same year.

New Ventures
The recent increase in demand for frac sand has brought new projects to CFBSI with the development and construction of facilities to extract, treat and ship frac sand. “The sand in southwestern Wisconsin is very good frac sand because of its roundness, hardness [compressive strength] and size,” explains Tom Hubbard, project manager for CFBSI. “I’ve heard it’s the best sand available in the U.S [for fracking], so companies from all over the United States have opened frac sand plants in Wisconsin.”

CFBSI started participating in projects for the frac sand industry, such as Superior Silica in Wisconsin. In 2008 the company finished its first complete project for Fairmount Minerals in Menomonie, Wis. The plant processes high-quality industrial sand and silica products used for oil and gas exploration, glass manufacturing and construction, and produced almost 500,000 tons in 2011.

The experience gained from that first project helped CFBSI with the EOG Resources plant development in Chippewa Falls, Wis. EOG, one of the largest independent crude oil and natural gas companies in the United States, would use the 50-acre plant to provide frac sand for its own use.

CFBSI was able to complete the large project in 16 months, starting in September 2010 and going into production in January 2012. Dealing with the cold Wisconsin winter was one of the first challenges the company faced a couple of months after the project took off. “Seventy to eighty percent of the concrete we poured was during that first winter,” according to Hubbard. “We had lots of snow that winter, so one of the problems at the wash-out area was that the ground ended up getting a lot of ice on it, so we ended up having to salt the wash out area. The trucks were also leaking water on the highway, so we had to send salt trucks there, as well, to make sure it was safe, instead of calling the county.”

Parking at the construction site, with 300 workers during peak times, also became a challenge during the cold months. “We had to plow the roadways and plow the parking lots,” Hubbard recalls. “We also had to keep moving the parking area as we were developing different parts of the plant.”

CFBSI dealt with the problems by meticulously planning each stage of construction. For the 12 silos, with a 78,000-ton capacity, a 6,000-square-yard concrete foundation had to be poured. “The large pour took six to eight weeks of planning ahead of time,” Hubbard explains. “We knew it was going to be during a cold time of the year, and we wanted to make sure we were not going to get stuck on the roadways.”

CFBSI organized 99 ready-mix trucks from the region and five different ready-mix plants in the area. “We had four concrete pumps to pump the concrete out to the slab. We had two separate meetings with all the concrete companies two weeks before we made the pour,” Hubbard recalls. “When the day came, the pumping company would radio the trucks and direct them to the pump where they needed to go. All the planning paid off because it went really well.”

The EOG plant is designed to be automated, with a system of 61 conveyors and elevators that will move the product along the different phases of the preparation process. The production capacity is 300 tons per hour of final product that will be transported by a railroad system with eight spurs running north to side along the property for quick distribution of its products. “It [the plant] will ship 100 to 110 railcars every other day,” Hubbard says.

The EOG plant has two sand piles outside, but it will eventually be entirely indoors, and run year-round – as opposed to plants with outside components that operate from spring to fall – making its production seamless. Hubbard expects more frac sand plants to set up operations in the Wisconsin area and he says he is confident that CFBSI has the knowledge, experience and infrastructure to deal with these projects, regardless of their size.