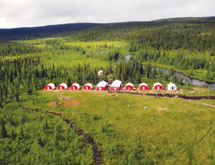 Mining is a herculean undertaking, requiring millions, if not billions, of dollars in capital to make things happen. Many mining companies enter into partnerships to realize their production goals, but Century Iron Mines Corp. has taken a slightly different approach. President and CEO Sandy Chim says the company has put itself in a solid position to succeed with its iron ore assets by aligning itself with the partners who are most interested in their potential success.

As Chim explains, the company was founded about four years ago by a number of investors who had experience investing in Canadian mining ventures. Through strategic acquisitions and land purchases, Century Iron Mines put together an attractive portfolio of projects that attracted the attention of some major financiers.

The company’s assets are located in a well-known iron ore-producing area of Canada, covering western Quebec south of James Bay and the Labrador Trough between northeastern Quebec and western Newfoundland. Thanks to its strong ties and partnerships, Chim says Century Iron Mines is in an ideal position not only to begin production on these assets within a few years, but also to enjoy sustained success from them for the long-term.

Recognizing Need
Chim says the company’s strategy is focused on the end-user. Because the traditional markets such as Europe and North America already are being served by existing mines, new mines must look to emerging markets for opportunities. One of the largest of these emerging markets, of course, is China.

“We recognize that the future sale of our product is going to go to China,” Chim says. “In terms of the market we’re very focused on servicing the Chinese market.”

In seeking long-term partners to help finance the company’s operations in Canada, Century Iron Mines has sought out Chinese steel companies that can provide it with the substantial resources needed to bring its iron ore assets to production. “Iron ore is a business of scale, and scale is a matter of capital,” Chim says. “To raise billions of dollars, you need to have – from a single-project company’s point of view – you have to focus on raising that capital from the earliest stage.”

Strong Partnerships
After going public last year, Century Iron Mines was able to attract the attention of some significant Chinese partners, and working in concert with them has put the company in a very secure position going forward, according to Chim. The two most important partnerships Century Iron Mines has developed are with Wuhan Iron & Steel Group (WISCO) and MinMetals Resources Ltd. The companies are listed on the Forbes Global 500, and represent two of the largest end-users, importers and traders of iron ore in China.

WISCO specializes in mining, coking, sintering, iron-making, steel-making, rolling and related practices. The company has partnered with Century Iron Mines in the form of a 25 percent equity stake and an off-take agreement for 60 percent of Century Iron Mines’ production. MinMetals’ operations include the production and trading of metals and minerals including copper, aluminum, tungsten, tin, antimony, lead, zinc, iron and steel-related commodities. MinMetals has a 5 percent equity stake in Century Iron Mines’ operations and an off-take agreement for 10 percent of its production.

Chim says the agreements Century Iron Mines has with these partners are significant not only because of the capital they provide the company, but also because as minority holdings they still provide Century Iron Mines with leverage.

According to Chim, the company’s inspiration came from another project in which WISCO invested capital and ended up purchasing a significant amount of the iron ore produced by the project. Century Iron Mines took that model a step further to build greater equity interest for partners such as WISCO while reducing the level of equity risk they would need to take on. According to Chim, this model will be the basis for the company’s success in the future.

Plentiful Properties
Chim says the company has a strong land position, with a number of properties expected to result in substantial iron ore production. Among these is the Duncan Lake Iron Ore Property in southwestern Quebec. Comprised of 270 claims covering more than 13,000 hectares, Century Iron Mines holds 51 percent of this property in a joint-venture agreement with Augyva. Featuring abundant water and electricity infrastructure, the property has more than 175 holes drilled to date.

Century Iron Mines also has a joint venture with Champion Minerals Inc. for the Attikamagen Iron Ore Property in the Labrador Trough. The property consists of more than 600 claims covering approximately 345 square kilometers. The company also owns 100 percent of the Sunny Lake Iron Ore project in Quebec, which consists of 530 claims. This project is in the exploration stage, according to the company.

Moving Ahead
Chim says thanks to the participation of its partners, Century Iron Mines is on track to begin production within the next few years. So far, everything is going according to plan, Chim says.

“The timeline for production is three years and involves going through the [typical] milestones of development,” he says.

Century Iron Mines is aiming for 2015 to begin production in the first of its mines. Chim explains that the company will go after the “low-hanging fruit” of high-grade ore that needs little processing and is readily shippable. Once the company generates cash flow from this production, he says, it can begin building the infrastructure to produce concentrated iron ore pellets. EMI