The energy to succeed

Established in 1981, the company continually challenges industry practices and provides leadership through its progressive and innovative approach to delivering energy.

Since it was created, Chemoil has seen a multitude of developments and expansions. Many of these were highlighted in European Oil and Gas in December 2011; Peter Grunwaldt, global sales director, gives more details about what the past 12 months have held for the organisation: “We have been through a phase where we have been focused on restructuring and optimising the business, as well as expanding into new business areas. This will put us in a stronger position and serve the company well going forward,” he says, before going onto explain why the company has concentrated on these areas: “The market, especially in shipping, has been volatile above everything else. Lots of companies are struggling in the current environment, in addition to new rules that are being implemented, which we have to adhere and react to. But this volatility also represents opportunities, especially for well-positioned and solid companies like ours. I think the turmoil has shown us the need to really focus on how we want to propel the company forward. Consequently Chemoil is more ‘light on its feet’ and versatile now, which is an obvious advantage in a challenging environment.” 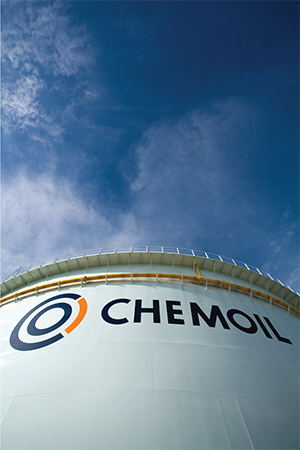 One of the cornerstones of Chemoil’s flexible approach is its dedication to maintaining a global geographic presence – something that is continually evolving, as Peter highlights: “Chemoil is a global company, and has been for years on the marine fuel sales side. Traditionally the US has been a strong market for the company, but we see other areas now coming into their own. The Rotterdam office has done remarkably well after a change in management, but I’m also impressed about the way business is moving in places like Panama, India and Singapore amongst others. At present there isn’t anywhere in the world we can’t assist our customers when it comes to sourcing fuel. Lately we have expanded our fuel trading activities into the Russian Far East. And we now also serve the English Channel, France and England with our own tanker.”

It is this global presence that Peter credits for Chemoil’s success: “On the marine side, being present in all the major bunker ports in the world is a major asset for our company. There is nobody in the industry that has the same ‘tool box’ as Chemoil, with a physical presence in major ports, storage facilities, shipping activities and a global team of traders and brokers. Furthermore we have the support of Glencore – the world’s biggest commodity trading company – which helps us in expanding and diversifying our business strategies.”

One such diversification is Chemoil’s move into new market areas – in September 2011, the company announced that it would be expanding into the supply of aviation fuel through its newly formed division, Chemoil Aviation. “The aviation fuel business is an immensely interesting segment and we have a very driven team that is making a lot of progress at the moment,” Peter says. “It has the potential to be a significant contributor to the company’s bottom line so watch this space. However, we are also creating inroads into other areas such as marine lubricants, which I’m also very excited about. Like everything else we do, we strive to be best in class in all segments. We are a truly global retail energy company.”

Working in a volatile market requires an innovative and diverse approach to business, but Peter emphasises that Chemoil carefully assesses its decisions in order to maximise success: “Like everybody else we are carefully watching our exposure and risk in this market,” he says. “There is always an element of risk in everything we do. But by being diligent and by having an organisation that is well prepared, and manned with top people, we hope to avoid the pitfalls the market will throw at us.”

He continues: “We have succeeded in attracting some top talent into Chemoil over the last few years, which has been a major contributor to our success. These people have managed to transform the way of thinking inside the company, and have helped bring Chemoil onto a more commercial path. I’m sure the next few years will see the fruits of their work.”

He concludes: “I see huge opportunities in our organisation and I’m very optimistic about the future despite the challenging environment we all find ourselves in. As a company we have to keep moving forward, creating a company capable of identifying the right opportunities and the right people to work with. If we can keep managing that we will do well.”