Since the company was founded in 2003, Circle Oil has developed a highly regarded reputation relating to its exploration and production services within the oil and gas industry.

Today it has operations in several areas across the globe and has had a presence on the London AIM stock exchange since 2004. From its registered office in Limerick, Republic of Ireland and its technical service base located within Berkshire, United Kingdom, Circle Oil has grown to incorporate successful operations within North African and Middle Eastern markets. At present the company is active inside of Egypt, Morocco, Oman and Tunisia, where its exploration and production services are employed in both onshore and offshore applications.

Circle Oil currently operates the largest license holding in Oman, which includes 100 per cent ownership of tenders for offshore Block 52 as well as onshore Block 49. The state of Oman can be regarded for its significant level of production and export of hydrocarbon, with multiple proven reserves and plays. The country is self-sufficient in oil and gas production and the Ministry of Oil and Gas (MOG) of Oman works closely with operators to ensure that operational and legislative requirements are met. “We have a great deal of support from the MOG in Oman. They always provide a strong helping hand for us and excellent level of assistance which is very appreciated,” says country manager Hassan Al Lawati, while discussing the operational climate within the region. “The government here provides a great deal of help and if we need anything from them we can communicate very quickly because they are located very close by.” 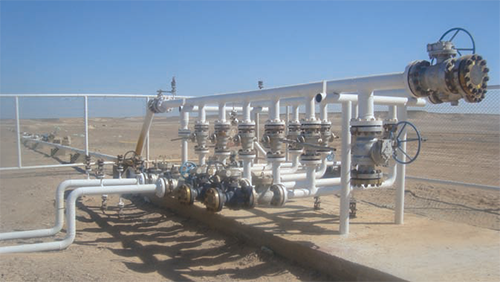 This closely collaborative and efficient relationship with local officials has allowed Circle Oil, through its wholly owned subsidiaries Circle Oil Oman Ltd (COOL) and Circle Oil Oman Offshore Ltd (COOOL) to sign and maintain two exploration and production sharing agreements with the Sultanate of Oman. The first of these was signed by COOL during 2005 for Block 49, which occupies an area of 15,438 sq.km and is located in the Rub Al Khali Basin. To date, several billion barrels of oil have been discovered in the Proterozoic/Cambrian reservoirs associated with the Ara Salt region of the South Oman Basin, and there is strong evidence of a similar salt basin beneath the western part of block 49. This new salt basin has been named the Ghudun Salt Basin and exploration activities have commenced with the two-fold objective of confirming the extent of salt and delineating likely drilling targets.Exploration activities have progressed well and in addition to a 3D survey conducted in 2010, the MOG granted an extension
to the exploration period within the permit during 2012. This resulted in a 2306 line kilometre 2D seismic survey, due north-east of the 2010 activity, interpretation of this is close to completion and is expected to facilitate future drilling.

Offshore Block 52 has also seen extensive seismic survey operations and drilling in the area is expected to begin during fourth quarter 2014. The block occupies an area of 90,760 sq km with water depths ranging from 200-2500m and like Block 49, an exploration and production agreement for Block 52 was signed in 2005. Additionally, copies of a previously acquired 2D seismic survey covering 10,540 km were obtained along with associated magnetic and gravity data. These were supplemented by a comprehensive regional survey covering 6000km, which was under taken during 2007 while the subsequent data was interpreted in-house during autumn 2008. Furthermore, throughout late 2010 and early 2011 the BGP Challenger successfully performed a 2D seismic survey on behalf of Circle Oil to map and re-affirm leads that had been previously identified during the previous operations. The results of this latest work have now been developed into a farm-out package inviting farm-in opportunities prior to exploration drilling.

Further to these operations, Circle Oil anticipates a significant increase in its projects in all of its geographic markets within the next year, as CEO Professor Chris Green comments: “2014 will be a very active year operationally, with substantial drilling activity in all our areas of operation. Exploration drilling in Morocco, onshore and offshore Tunisia, onshore Oman and development drilling in Egypt will be augmented with work on the new Beni Khalled permit. The recently announced new permit in Grombalia, Tunisia creates further potential for very significant upside and we await the result of the Omani bid round.”

In addition to its strong performance on the technical side of the business within its various regions, Circle Oil has developed a strong corporate culture of co-operation and direct communication that enables the company to act quickly and effectively to market needs and to challenging situations. “We have well trained staff and a good connection with our operational programme within the business,” Hassan elaborates. “We are very close to the ministry in Oman, as well as with our London and Ireland offices. The company is a mostly joint operation and we always have visitors. Our CEO always visits the countries that the business is active in, including Oman, so we can sit opposite each other and discuss the operation rather than by phone or by email. So it is much more direct and we are able to communicate very quickly.”

The New Year has and will continue to be an exciting time for Circle Oil. As well as an increase in its physical operations, as of 6th January 2014 the company welcomed Steve Jenkins as its new chairman. Following a share increase of around 30 per cent at the news, returning non-executive chairman and previous interim chairman, Nick Clayton concludes: “The appointment of Steve Jenkins represents a landmark event for Circle and I am absolutely delighted to welcome him as the new chairman. He has a wealth of technical, city, management and MENA experience and is therefore an ideal candidate to work with the executive team and the board to steer the company through the next phase of development and growth.”