It is safe to say that much has happened when it comes to Clarke Energy, the award-winning, multi-national specialist in the engineering, installation and maintenance of engine-based power plants, since we last spoke to the company in the summer of 2016. Arguably the most significant development occurred in February 2017, when it was announced that Kohler Co. of Wisconsin, 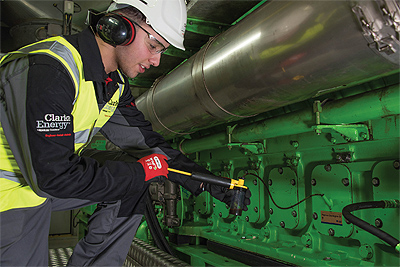 USA, had acquired the company.

“Clarke Energy’s end-to-end capabilities are very highly regarded around the world and the company’s products and services are an excellent fit within our existing power systems business,” said David Kohler, President and CEO of Kohler Co. at the time of the acquisition. “We are excited about this acquisition because it adds the distribution of large gaseous generators, viewed as a clean power source, to our product portfolio. We believe Clarke Energy’s prime and continuous gaseous solutions are an ideal complement to our existing diesel generator offering for standby applications.”

Alex Marshall, Group Marketing and Compliance Director of Clarke Energy, explains to Energy, Oil & Gas why this has been a hugely beneficial development for the company: “Becoming part of Kohler Co. is an extremely positive development for Clarke Energy as they are one of the world’s largest manufacturers of engines and power generation systems. Working together, we are now able to offer an impressive array of expertise, industry leading products and comprehensive after-sales support to our customers around the world. Kohler also has a track record of making significant reinvestment, with around 90 per cent of its earnings being put back into the company annually, which gives it the ability to grow at a steady, consistent pace.”

Whether it is by design or coincidence, the fact remains that in the months since its acquisition by Kohler Co., Clarke Energy has experienced excellent growth of its own. In 2017, the company achieved a record annual turnover of approximately £340 million and has just recently surpassed 6GW of installed power globally, across 25 countries. This latter accomplishment represents a major milestone for Clarke Energy and is yet another indicator of its continued success.

This year has seen the pattern for exciting developments continuing, and February 2018 saw the company now only successfully supplied its first FlexGen hybrid energy storage solution for delivering microgrid projects to OK Plast in Nigeria, but also be selected by leading steel roofing and building solutions provider Alaf to supply a natural gas-fuelled captive power plant to support its manufacturing facility in Tanzania.

“In the case of the FlexGen hybrid solution, this will enable OK Plast to avoid expensive losses in its factory that were previously caused by power fluctuations,” Alex states. “The FlexGen ultra-capacitor platform dramatically improves the power quality at the site, meaning only one engine is required to run the factory, with the second on assist and the third as a standby. It also enables the facility to seamlessly switch from grid-connected power to island mode.

“Meanwhile, when it comes to our work on behalf of Alaf, Tanzania’s national electricity grid is notoriously unreliable, so they needed to self-generate reliable power for their manufacturing facility in Dar es Salaam. We will supply two of GE’s Jenbacher 612 engines, each capable of producing a total of 2MW of power at 415V for local consumption.” 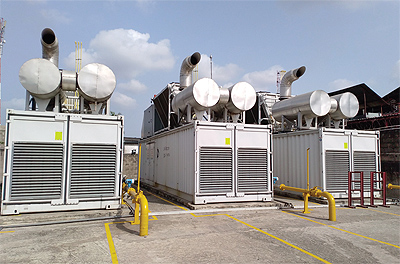 Due to a number of technological developments in recent years, there has been a clear pattern of movement away from large centralised power stations towards decentralised generation close to the site in question, which has resulted in hybrid power generation solutions being more frequently deployed. Microgrids typically consist of a number of different power generation technology types and draw upon the benefits of renewable energies, storage technologies and gas or diesel engines. It is this combination and synchronisation of different types of power generation technology that gives rise to these hybrid solutions.

“Microgrids and hybrid solutions have massive potential due to customers moving away from large centralised power stations,”Alex confirms. “Industrial combined heat and power (CHP) in the UK, African and particularly the United States markets are especially interesting for us due to their respective spark spread, this being the difference between the price received by a generator for electricity produced and the cost of the natural gas needed to produce said electricity.”

Back in the UK, the company not only continues to deliver significant projects to its customers, but has also recently been named as an ‘Export Champion’ for the government’s Northern Powerhouse initiative. “Being named as an ‘Export Champion’ by the Department for International Trade gives us the opportunity to help share our success stories, tips and advice with fellow exporters,” Alex noted. “Our own export achievements continue to grow, which is testament to our ability to identify and move into new markets, and commission our engines using local service engineers.”

He continued with further details about a new project: “Just in the last few weeks we delivered a full turnkey, design and build 21MW electricity generating, 14 engine peaking plant to AMP Ashford Power in Kent, which was delivered within a 40-week period, on time and to budget,” Alex adds. “The fully automated and unmanned site is monitored and controlled remotely, providing critical electricity to the National Grid at times of peak demand. When not in operation, the 14 containerised engines wait on standby and can be ramped up in less than two minutes.”

Having attained obvious success already, Clarke Energy’s future looks just as bright, with Alex pinpointing organic growth through acquisitions being on the immediate horizon. “When it comes the future, I can also see a scenario where the company moves into more complex solutions, while continuing to supply EPC turnkey, multi-engine power plant projects, backed up by long-term support services.”