As much as 30 per cent to 50 per cent of a mine’s total energy use is typically due to dump trucks working on site and haulage trucks transporting materials from one location to another. As a consequence, diesel costs are significant – but these can be reduced by adopting the latest in-engine valve actuation technologies. Such technologies also reduce tailpipe emissions, which is becoming increasingly important now that investors expect mining businesses to demonstrate improved environmental responsibility and legislators are tightening emissions regulations.

This is no small matter. It is estimated that 28,000 trucks are involved in mining operations around the world, and on average each of these consumes close to a million litres of diesel every year. According to some estimates, this is polluting the earth’s atmosphere with 68 million tons of carbon dioxide annually, equivalent to the greenhouse gas emissions of a small industrially-developed nation.

Getting an engine technology to improve fuel economy and emissions simultaneously, however, has proved tricky. In fact, until recently these two objectives seemed mutually exclusive. But now, thanks to breakthroughs made by Jacobs Vehicle Systems, both can be tackled at the same time. Here I explain briefly how this is achieved and how this complements widely employed emissions-lowering technologies so that emissions can be lowered even further at the same time as improving fuel consumption.

Those widely used emissions technologies are exhaust gas recirculation (EGR) and selective catalytic reduction (SCR). EGR recirculates exhaust gases back into the intake manifold to reduce the oxygen content and temperature of the combustion process, in turn reducing nitrogen oxide (NOx) emissions. SCR injects ammonia through a catalyst into the exhaust stream to reduce NOx emissions. But there are downsides to both these solutions. Because EGR is rebreathing exhaust air, it does have a fuel penalty. Because the engine has to use fuel to raise the temperature of the SCR after treatment this system also worsens fuel consumption.

In contrast, when complementing EGR and SCR, some valve actuation technologies can cut emissions to lower levels than ever before at the same time as improving fuel consumption. 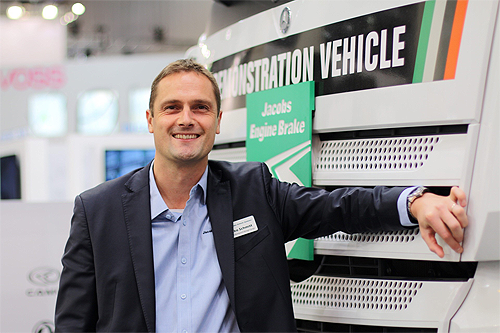 technology – and a two-position-variable valve system is at the heart of Jacobs’ first engine brake, the legendary Jake Brake, which went into service way back in 1961! Today, engine brakes are employed by all trucks in mining applications but differing valve actuation technologies are now also employed to meet differing needs.

CDA is slightly different in that it hydraulically disables the opening of the intake and exhaust valves. When this is combined with disabled injection in selected cylinders, the deactivated cylinders act as a gas spring and return the compressed energy of the air back to the crank. Although deactivation of up to three cylinders currently seems easiest to implement, a variable number, up to all cylinders in combination with Dynamic Skip Fire® technology using control methodology from Tula is also a possibility. By achieving higher load and exhaust temperatures in the operating cylinders, CDA makes it possible to maintain after treatment temperature when the engine is in low load operation. CDA also enables faster warm-up of the after treatment system after engine start-up and minimizes cooling of after treatment during coasting. Recent engine tests by an independent third-party consultant have shown that in a set-up where three of six cylinders are deactivated and the engine is at its lowest loads, CDA can r alize fuel economy savings of up to 20 per cent.

Easier on-site servicing
Another recently launched feature, which improves fuel economy and reduces emissions is Fulcrum Bridge technology. This removes the traditional need to set and adjust the engine’s lash settings (the mechanical clearance in the valve train between valve and camshaft) by employing Hydraulic Lash Adjusters (HLA). HLA’s automated accuracy is valuable because when adjustments are made manually, even the slightest variance from the optimal setting can be detrimental to emissions and fuel economy. Fulcrum Bridge technology also eliminates the inconvenience, particularly acute in mining applications, of having to find somewhere dust-free to open the valve cover.

Cleaner emissions will become even more of an operational imperative as regulations tighten. By 2024 the California Air Resources Board (CARB) is scheduled to tighten NOx emissions for low-load drive cycles and idling, with regulators elsewhere expected to do the same – and many mining trucks spend a lot of time idling. But now, at last, there are emissions-lowering solutions, which also reduce maintenance requirements and fuel consumption. Environmentally and commercially, valve actuation technologies are worth having.