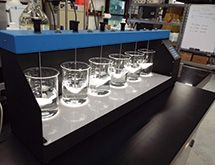 CoilChem LLC came to the oil and gas industry in 2009 with plans to introduce new chemical solutions designed to improve horizontal well completions and work-overs. The Washington, Okla.-based company focused on chemicals that would extend completion depths and improve operational success, says Jason Watts, co-owner and vice president of manufacturing.

“Those operations can be challenging,” says Watts, who co-founded the company after gaining several years of chemical experience in various industries. “That was always our main challenge,” he says. “ What we have focused on is the chemistry of the fluids being pumped. The chemistry had always been the weakest link.”

Watts and his partners founded CoilChem shortly after a former colleague introduced him to Danny Wesley, co-owner and president. Wesley brought more than 20 years of oil and gas industry experience to CoilChem, having worked in numerous managerial and ownership roles. “It snowballed from there,” Watts recalls. “We had an instant connection. I’m the chemist in the group.” Jerry Noles, CEO and technical director, rounded out the leadership team. Noles has more than 30 years of experience in snubbing, well control, work-over and coiled tubing operations.

Valuable Feedback
CoilChem didn’t enter the market with its own solutions. “We were a distributor for other companies for awhile,” Watts says. But the opportunity to survey the industry and determine companies’ needs convinced the leadership team that CoilChem should proceed with its own offerings, he says.

“Feedback was the difference,” Watts says. “We were listening to the needs of the customer. We wanted to improve the efficiencies of the overall operation.” This defined focus eventually led to multiple patents and cutting-edge technology that has helped oil and gas companies extend completion depths and improve the operational success, Watts says.

Numerous Challenges
Introducing its solution to the oil and gas market took some effort early on, Watts says. “There was a tremendous amount of R&D,” he says. In fact, CoilChem field tested multiple versions of its chemical solutions only to encounter various obstacles along the way. “At first, we were continually going back to the drawing board and revamping it,” he says.

The company’s next big challenge was to gain traction in an industry that can be slow to adopt new solutions, Watts notes. “In the oil field, everyone is protocol driven, and change comes slow,” he says. “No one is going to jump right on board. You have to keep plugging away, plugging away.”

But CoilChem was diligent and ultimately gained acceptance when a few large industry participants became clients. “Today, we’re working with some of the biggest names in the industry,” he says. “Industry acceptance is key. Part of that recognition involved CoilChem educating customers about the types of chemicals it was using.

“When you throw the word ‘chemicals’ out there, people freak out,” he says. But CoilChem reassured clients that it was not using any form of harmful toxins. In fact, the company has passed on jobs that involved work with hazardous materials, he says. “We had to work very closely with key people in the industry to help them see progressive chemistry in the same way they look at other progressive technologies that have had such a tremendous positive effect on increasing operational efficiencies,” Watts says.

The oil and gas market is depressed, but CoilChem plans to take advantage of the downturn, Watts says. “We’re going to step back and define our operations,” he says, adding that further R&D will take place to improve the company’s solutions. “We’ve seen a slow down like everyone else but are fortunate to have gained the trust of key companies through overwhelming successes relative to cost savings and keeping busy while market recovery occurs,” he says.