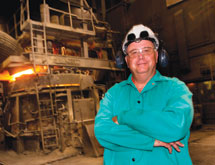 It seemed like a good idea at the time — ship work overseas where labor was cheap and manufacture products at less cost in order to be more competitive in the marketplace. And for a number of years, it was the popular choice. A choice that hurt American industry, weakened the U.S. economy and eliminated jobs. But there was a flip side to it.

Shipping jobs overseas meant a loss of personal touch. You couldn’t assure your customer of quality workmanship because you had no control over it. In fact, you had no idea of the qualifications or even the identities of those doing the work. And shipping massive steel castings like the ones produced by Columbus Castings presented two other major drawbacks:

It was expensive — and the high shipping costs considerably reduced profit margins;
It took a long time — between 12 to 14 weeks. A serious disadvantage for the fast-paced and unforgiving competitive market of American business;
So major steel customers like Caterpillar, Komatsu and Hitachi began repatriating back to the United States and looking for reliable American manufacturing steel suppliers. Their gaze naturally landed on Columbus Castings. And now everyone else in the area is realizing the best thing in steel is right in their own backyard.

And like a ravenous, sleeping giant awaking from hibernation, Columbus Castings is responding with competitive energy and surprising innovative agility for a 110-year-old company. With renewed, flexibility and re-vitalized market savvy, it’s not only alive and well — it’s growing explosively.

A New Leader and Vision
Leading the way for Columbus Castings is their new President and Chief Executive Officer, Richard (Rick) T. Ruebusch, who has been on board since February 2012. His 14 years of global foundry and lean manufacturing experience uniquely qualify him for the job. Ruebusch has successfully led five other companies through this same process.

But none of this is apparent when you meet Ruebusch. He’s unassuming in his dress and his demeanor. Perhaps it’s his love for the rugged outdoors and the years he spent in Montana. Maybe it’s the big, shiny, western belt buckle he sometimes wears that suggests he’s a cowboy at heart. Or possibly it’s just the easygoing, yet quiet self-confidence in knowing he’s a man with skills and a man on a mission with nothing to prove to anyone but himself.

Ruebusch speaks simply, directly and with authority. And you’re immediately convinced his words are more than a prediction when he announces his plans for Columbus Castings by saying, “Our goal is simple. It’s to be the best large steel casting company in the world.”

Along with these and other mining applications, the company is uniquely equipped to supply large valves, centrifugal pump housings and impellors. This sets it apart from the competition and presents an obvious advantage to customers. Because other foundries are limited in the size of castings they can make. So equipment must be designed to accommodate the size of castings the foundry can produce, which usually means two or three smaller parts when one large casting would work better. This modification can result in longer lead times, lower performance and reduced efficiency.

“Our ability to provide large castings means we can provide the part that fits your design rather than forcing your design to fit our part,” Ruebusch says. “It’s faster, more cost-effective and the final product is more efficient.”

With its concurrent engineering capabilities and Midwest location, Columbus Castings offers greater accessibility and quicker solutions to problems. This is a particular advantage to the mining industry where replacement parts are consistently needed, but downtime costly.

“When you need dependable quality and a quick response, we should be your first call,” Ruebusch adds. “Our turnaround times are easily half that of off-shore suppliers.”

A Promising Future
Celebrating 110 years in business this year, Columbus Castings has a rich, historical legacy as America’s largest steel foundry. It manufactures complex steel castings for the mining, construction, and agricultural equipment, power generation, motion control, and many other industries. With its flexibility and lean manufacturing expertise, it produces high quality industrial castings weighing from 100 to 70,000 pounds.

Formerly known as Buckeye Steel Castings Co., the company established itself on its current site in 1902, and has roots extending back to 1881. The company is now owned by Protostar Partners LLC – a private equity company whose leading vision and innovative approach is carving a new path for Columbus Castings.

“If you visit our manufacturing plant in Columbus, you’ll see placards from World War I, World War II, the Korean War and the Vietnam War,” Ruebusch says. “In times of need, we’ve made everything from tank turrets to bailey bridges. We have an impressive legacy of serving as a strategic asset to the nation.”

Steel castings produced on the company’s 90-acre manufacturing campus – the largest single-site steel foundry in North America – continue to be used for many of the country’s most important infrastructure-related functions.

“When it comes to infrastructure, we are uniquely positioned to do things other companies can’t do,” Ruebusch says, citing its recent production of steel castings used for flood control support in New Orleans specified by the U.S. Army Corps of Engineers. “We were the only ones who could make those castings that weighed more than 70,000 pounds.”

The ability to produce industrial equipment for companies like Caterpillar, Komatsu and Hitachi is motivating their decisions to repatriate production jobs back to the United States from China, India and other countries. “Our capabilities have made us more competitive with overseas companies because our best practices have increased our cost-effectiveness and reduced our lead time,” Ruebusch says.

Through its lean manufacturing initiatives, the company has achieved a 30 percent improvement in its cycle time during the last year. Its progressive approach to higher quality and improved manufacturing process is enhanced through the extensive testing conducted in its state-of-the-art industrial radiography lab, technology center and other quality control sites within its facility.

“Time is money,” Ruebusch says. “You can get castings from India or China and have no idea what level of quality to expect. You wait many weeks for shipments to arrive and then you discover components are bad and need significant reworking.”

In contrast, Columbus Castings produces and ships average components in less than 12 days, with larger components taking only around nine weeks. Since its products are used worldwide, it also meets international quality standards and holds numerous certifications including ANSI/ISO/ASQ 9001 and American Association of Railroads M-1003.

Taking a more responsive, customer service approach to business, Columbus Castings now provides secondary machining capabilities and the delivery of finished parts. A case in point is the completed axle the company currently produces for Caterpillar.

“Customers used to arrange their own machining to make finished parts from our raw castings,” Ruebusch says. “And in today’s quick to market environment, that is an extra, time-consuming burden. Now we provide it through a seamless service that delivers high quality, ready- to- go parts for them. It’s fast, convenient and cost-effective.”

Moving Safely Forward
As the company moves forward, Ruebusch is emphasizing greater responsibility toward employees and the environment. During his brief tenure, significant improvements have already been made in safety.

As a result of increased employee communication along with a revitalized safety presence and training across all shifts, its safety record has increased by approximately 80 percent over the last several months.

The company’s future also includes implementing several green initiatives. First, it is exploring methods to recycle the huge amount of sand that is produced as a manufacturing by-product instead of sending it to the landfill. In addition, there is a huge pile of residue on the property that will be dispersed through environmentally safe channels.

With an illustrative history behind it, a can-do attitude of pushing ahead, and a passionate leader directing its course, the future of Columbus Castings is bright. As it combines grit, technology and an enterprising spirit of local, national and global proportions, it will continue to move itself and American manufacturing as a whole forward.

“We are proud of our people and our support from the community,” Ruebusch says. “And we are proud of the products we make because they support our nation’s infrastructure.” EMI