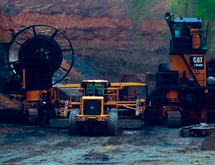 A lot has changed for Contour Highwall Mining in the past few years. A privately held company headquartered in Summersville, W.V., Contour Highwall Mining’s mettle has been tested by a difficult time period for the coal industry. Although the company has had to retrench and adjust its strategy, it has also proven that it is resilient.

Contour Highwall Mining has been performing highwall mining services since 2000. Today, it has three highwall mining machines and an auger machine out in the field. Overall, this is a decrease in size from where the company was a few years ago.

“The policies of the current administration in Washington have been a major reason behind the downturn of the coal industry,” CEO Dave Bundy says. “I believe we need to use all our natural resources as part of our energy policy, so I think the focus should be more on finding safer and cleaner means of using coal.”

Different Thinking
Discouraged but not defeated, Contour Highwall Mining has changed its whole way of thinking. The company has gotten into manufacturing aspects of mining, focusing on self-supporting the company by adding rebuilding and manufacturing capabilities.

“We have been thinking out the box and have our own engineer on staff and have a patent-pending retrieval system for highwall mining,” Bundy says, noting that the retrieval system will be up and running on one of Contour Highwall Mining’s highwall machines in early July.

“We’ve had to think about how to survive in this climate,” he adds. “We have looked to figure out what we can do for ourselves and not outsource to the manufacturers of the highwall machines anymore. We are competitive in pricing and quality, and we’ve expanded our capabilities by getting into rebuilding of machines.”

The impact of the downturn in the coal market has also taken a toll on Contour Highwall Mining’s staff levels. Several years ago, the company employed more than 150 people. Last year at one point, its numbers were below two-dozen people. Now its employee numbers are hovering around the mid-40s, and the company hopes to increase its headcount by another 20 or so by the end of this year.

On the Upswing
Fortunately, Bundy believes Contour Highwall Mining has seen the industry get to the low point of this cycle and there are signs that the industry is coming out of it now. For one thing, a lot of other countries are coming into the American coal market and buying coal and the industry’s reserves. Although that means the coal will be going out of the country – or owned by foreign interests – it does mean that there are some opportunities for Contour Highwall Mining to put its skills to good use. Because of that, the company is looking at international opportunities to expand its highwall mining solution offerings.

“Highwall mining and auger mining have always been cheaper, less intrusive and safer than other methods of mining coal,” Bundy says.

No matter what the market conditions, Contour Highwall Mining will always strive to do its business in the safest manner possible. Bundy says the company maintains a very good safety record in the industry because safety has always been a top priority for the company.

“Our people are like our family, and we want everyone to come home safely every day,” he says. “I don’t expect to see the regulatory agencies imposing any new rules on us that would make it harder to achieve their safety criteria, but we already go through stringent training regimens and have constant safety meetings with our people about any dangers we could encounter on daily basis.”