Although relatively short in its length, the history of COSL Drilling Europe AS has been one of fast-paced development, all underpinned by the unwavering vision to build and operate semi-submersible drilling units in the mid-water segment.

The company was founded in 2005 under the name Offshore Rig Services, but a year later had become OffRig Drilling ASA, before it was purchased by Awilco Offshore in early 2007. It was however, the acquisition of Awilco by China Oilfield Services Limited (COSL) in 2008 that set in motion the company as it stands today.

At the time of this takeover COSL Drilling Europe had three semi-submersible rigs under construction, as well as a fleet of eight jack-up rigs and two accommodation rigs, the COSLRival and COSLRigmar, to its name. The first of its new-build units, the COSLPioneer, was delivered in November 2010, followed by the COSLInnovator in November 2011, and most recently the COSLPromoter in May 2012. This fleet is yet to become four though, with the signing of a new construction contract at the end of last year for the COSLProspector, which is intended to be delivered in the second half of 2014. As with the previous semi-submersible rigs, the COSLProspector is being constructed at the Yantai CIMS Raffles Shipyard in China.

Whilst the previous three rigs are very similar in size and specification, the COSLProspector is set to elevate COSL Drilling Europe’s capabilities to the next level: “Our current rigs are capable of drilling to depths of 750-metres, but the new rig will have double this capacity with the ability to reach down to 1500-metres. In addition, it will be the first of our rigs winterised for Arctic operations with DNV WINTERIZED BASIC, ICE-T, and CLEAN Class classification. The COSLProspector will be prepared, internally and externally, for operation in the Barents Sea and to the north with respect to wind chill and heating,” outlines Magnar Fagerbakke, vice president of marketing and contracts.

As to the reasons behind this particular design choice, Magnar continues: “If you look at the markets in Europe or Norway, as well as where exploration is taking place further north such as Greenland, Iceland, and Canada, you really need a rig with a 1500-metre depth capacity to cover all of these region where drilling is expected in the future. For example in Norway, and 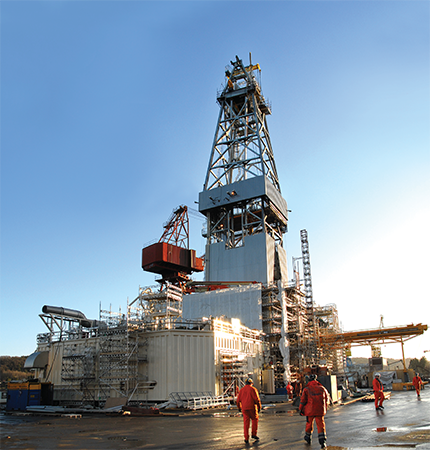 the western part of the Barents Sea we know that major companies like Shell and ExxonMobil have secured large acreage at water depths from approximately 1000 to 1500-metre. Therefore this 1500-metre limit is enough to cover almost all of Norway, and most of the prospect areas outside the country. The COSLProspector offers an optimal water depth capability that delivers high flexibility, and ultimately a good match between specification and the marketplace. There is interest already in the unit and we would expect to secure its first contract during 2013.”

This becomes even more apparent when you consider that very little oil and gas production currently taking place in Norway is in water depths beyond 420-metres. Whilst many of COSL Drilling Europe’s competitors may have been channelling their investment into the ultra-deep water rig developments, the company has been careful to match its assets to the mid-water segment where this activity is taking place. In particular COSL Drilling Europe has focused on Statoil’s needs, as the largest operator on the Norwegian Continental Shelf (NCS), which has helped it secure two eight-year contracts with the organisation, including work on the world’s largest operating subsea field – Troll.

“All three of our current semi-submersible rigs are contracted to Statoil, with one in operation, and the newest additions – the COSLInnovator and COSLPromoter – to follow in the next few weeks. Additionally, our accommodation unit COSLRigmar is working in Norway for ConocoPhillips on the Ekofisk Field, where the duration of its contract has now been extended until May 2014 with the option for a further six months. A small extension has also been seen on the COSLRival, which is working for ConocoPhillips UK until November 2013, before the vessel enters into a new contract with BP from April 2014. If all of the options are exercised that will take the vessel through till February 2015,” elaborates Magnar.

Whilst contracts such as these have helped secure COSL Drilling Europe’s order books for the next two years, since its purchase by parent company COSL, which is the sixth biggest supplier of drilling services in the world, the business has also been working towards a much longer-term vision. “It has been a great advantage for us to become part of COSL as they have a longer horizon on investment and in their thinking. As such, we are looking at how to take this company and expand into other regions in the global drilling unit market, but we have not yet decided upon our strategy for achieving this or the markets we shall target. For the near future, our main objective is to get the COSLInnovator and COSLPromoter out into operation, and then we will look at the steps for the future,” concludes Magnar.