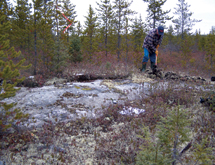 Electronic devices have progressively become smaller over time – even first-generation iPods look large when compared to the latest small and sleek MP3 players available from multiple manufacturers today. The miniaturization of electronic devices is thanks in part to tantalum, a rare byproduct of lithium that is used to build the capacitors installed in these types of devices.

Tantalum is not only rare; its mining practices have come under international scrutiny in areas such as the Democratic Republic of Congo for serious human rights violations and environmentally hazardous practices. These concerns include child labor practices, unsafe worker conditions and funding for military guerrilas in the area.

Finding a new source of lithium and tantalum – and establishing ethical practices of extraction – is what makes Critical Elements’ new project an exciting development in this sector. Critical Elements’ development, the Rose, is located in the James Bay region of Quebec. “We are at an advanced phase of the development stage and we’re hoping to start production in a couple of years,” President Jean-Sebastian Lavalee says. Since 2009, the company has drilled 181 holes covering over 26,000 meters and expects to be in production by as soon as 2016.

The Rose mine will be the first new ethical tantalum development anywhere in 25 years, according to the company. “Tantalum is very rare,” Lavalee explains. “It is No. 1 on the list for the most critical metals in China and top-three critical metals in the United States. There are only few deposits in the world and all of them have some ethical problem with them; only one in Brazil doesn’t have ethical issues and we’ll be the second [in the world].”

To battle unethical sourcing of tantalum, many companies around the world, including Apple, are voluntarily committing to using only ethically sourced lithium and tantalum in the manufacturing of their electronics. Many countries are also banning imports of these metals from unethical sources. In the United States, a clause included in the Dodd-Frank Act signed in 2010 by President Obama forbids companies from using tantalum illegally extracted in the Democratic Republic of Congo.

But ethical sourcing is not the only unique feature of the Rose project. “Not all lithium is alike,” Lavalee says. “We can produce lithium with 99.9 percent purity, which is very rare. To build a battery you need a minimum of 99.5 percent. The better purity, the better efficiency and power you’ll get for the batteries.”

The high purity of the lithium means that Critical Elements has an advantage over other Brine lithium producers because the company doesn’t have to process the metal once it’s sourced. “When the purity is lower, the mining company has to filter the lithium over and over until it can achieve that 99.5 percent,” Lavalee explains. “We don’t have to do anything; it’s just once process and we have 99.9 percent purity.”

Unique Source
Critical Elements estimates that the Rose open-pit operation should deliver 452,000 tonnes of lithium carbonate and 3.5 million pounds of tantalum pentoxide over the next 17 years. “There are no other projects down the line with the same [projected] production as our development with positive economics,” Lavalee says.

The $268 million project will create 1,100 jobs during the construction phase, 225 direct mining jobs and 250 indirect jobs once in production, including training and hiring of First Nations People from the areas adjacent to the project. Lavalee notes that the cost will not involve construction of infrastructure, which is already in place. “We have power lines and road access directly to the project and we have an airport about three kilometers away,” he explains.

Lavalee expects this project to be completed in a short time, in part due to the experience the company brings to the field. “I’m the third generation in a mining family. My grandfather was a mining engineer and my father and I are geologists,” he notes. “The plan is to have the project completed from discovery to production in five years, which is very fast.”