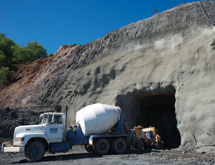 Crocodile Gold Corp. President, CEO and Chairman of the Board Chantal Lavoie has seen the company grow significantly since he took the helm in early 2011. “We were a small, junior exploration and producing company a year ago and are now a mid-tier producer,” he says. “Our company profile has changed considerably over the last 12 months from its foundation of exploration activity.”

Two major developments during Lavoie’s 14 months as president and CEO have repositioned Crocodile Gold from its origins as a junior company working in Australia’s Northern Territory. The company, headquartered in Toronto, formally started in 2009 when it purchased assets from an Australian subsidiary of GBS Gold International. In 2010, the company resumed production from the acquired assets while maintaining an emphasis on exploration to production. Later in that year, it initiated the development of Cosmo, its flagship property in the Northern Territory.

Earlier this year, Crocodile Gold also gained additional financial support from shareholder New York-based Luxor Capital, which allowed it to purchase the Fosterville and Stawell mines in Australia’s Victoria State. The acquisition, completed in May, enabled the company to more than triple its revenue in second quarter 2012, from $18.5 million to $56.7 million. The company’s amount of gold sold during the second quarter increased to 35,665 ounces from the first quarter totals of 10,900.

The three active mines are currently producing at a rate of 211,000 ounces of gold combined annually, with more anticipated in the future. “By the end of 2014, we see our company being a 300,000-ounces-per-year producer,” Lavoie says.

Ore from the Cosmo mine is processed in the Union Reefs Mill in the Northern Territory, which has a capacity of 2.4 million tonnes per year. In addition to its three producing mines, Crocodile Gold is evaluating three areas in the Northern Territory, one of which is anticipated to enter production next year. The company later this year also expects to announce a new exploration project. Crocodile Gold’s assets total 4,000 square kilometers. “We are in a position where we can grow our existing assets through brownfield and greenfield exploration,” Lavoie says.

‘A Solid Foundation’
Crocodile Gold uses several advanced technologies in its exploration and production efforts, a few of which it gained following the acquisition of the Fosterville and Stawell mines.

“With the Fosterville and Stawell acquisition, we now have skills and knowledge we can apply to other projects,” Lavoie says. “We’re using that knowledge on projects that up until recently we questioned the feasibility of.”

The company uses a time-domain electromagnetic geophysical survey system, VTEM, to identify geophysical anomalies in its work in the Northern Territory. This information, as well as historical geological information detailing the last 30 years of exploration work conducted in the company’s holdings, is compiled in a large database. “This, to my knowledge, is the first time this sort of thing has been done in Australia,” Lavoie says. “This gives us a very strong tool for the future.”

The company’s access to technology, as well as the experience of its leadership and team of geologists, engineers and operators gives Crocodile Gold confidence that it will continue to grow. “Despite being a young company, we have three interesting projects,” Lavoie says. “We have an experienced team and a significant land position that gives us a solid foundation and a clear focus.” EMI