Skip to content
You are here:Home » CRU Logistics
Insights 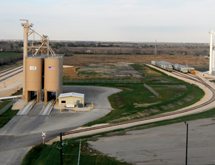 Rail embargoes are a rare occurrence, but a chill ran through the oil and gas industry in 2009 at the onset of the horizontal drilling phenomenon when the Kansas City Southern Railroad set two embargoes in South Texas within a few short months due to the increased demand for frac sand.

CRU Logistics’ Bryant Tenorio, General Manager of US Terminals, says the industry experienced an unexpected growth spurt due to the implementation of horizontal drilling. What was once a 2-stage vertical well was quickly maturing into a 15-stage horizontal well. A proppant need that was once fulfilled with three or four railcars was demanding 30 to 40 cars.

Like any other boom within the industry, major service companies reacted by providing exponential amounts of proppant to the area.

“Logistics seemed to be the last issue on everyone’s mind,” Tenorio says, adding that costs skyrocketed as a result of the embargo. “When you are embargoed by a railroad, you pay a ridiculous penalty on cars – up to $300 a day per car – along with costs associated with potential shutdowns at the well sites.”

CRU Logistics’ award-winning terminal in Victoria, Texas, developed a way to avoid these costs hidden in operations. Among its many amenities, the company has relationships with numerous rail yards between South Texas and the various sand mines in the northern United States, so cars can be diverted and put into storage, which is more economical for the customer.

CRU Logistics LLC is part of a group of privately owned companies created to serve several markets in the oil industry throughout Mexico and the United States. The company boasts more than 10 years of experience in terminal development, rail transportation and product logistics.

The company combines these capabilities to operate frac sand storage and transloading terminals in major oil and gas hubs in the United States. Its services include supply chain visibility, rail fleet management, and inventory control.

CRU Logistics earned its Oil & Gas Awards honor for its terminal in Victoria, Texas. This 20-acre site has two separate frac sand silo terminals, each of which consists of six silos. Each terminal, capable of moving between 40,000 and 50,000 tons a month, run autonomously with their own rail, crew and trackmobile.

As part of its management services, CRU Logistics offers its own in-house logistics and inventory program named “SandCommand.” This Web-based program handles logistics and tracking of rail cars as well as inventory at the terminal.

Because of the enormous volumes of sand coming in and out of terminals, it is easy to lose track of existing inventory, how much is en route, and how much is available during internal audits. However, SandCommand handles all of that for its clients.

“Our program does all of that seamlessly,” Tenorio says, adding that it provides up-to-the-minute information. “The minute we offload a rail car, it becomes part of our customer’s inventory. Any amount deducted from the silo is recorded in real time and visible online.”

“Customers can log into SandCommand and see their railcars on a daily basis, helping them plan their jobs,” Tenorio adds. “Essentially we post your supply chain online for you to analyze.”

A Light Future
Now that CRU Logistics has established itself as an expert in delivering a facility as massive as its Victoria terminal, Tenorio says the company will offer a “light” version of its terminal for clients who require less volume. The lighter model will feature a system capable of comfortably moving 20,000 tons of sand in a given month, along with 24/7 management.

“We meet the specific needs of our customers,” Tenorio says. “We consider how many grades will move and monthly volume in order to design an efficient transloading model.”

Vast Experience
The experience of CRU Trading – the parent company of CRU Logistics – includes the development of a liquid storage facility in southeast Mexico, transloading facilities in northern Mexico and transportation management for 50,000 shipments.

Founded in 2001, CRU Trading is involved in providing complete transportation management and logistics services to companies such as PMI. Through its privately owned railcar fleet, its experience in high-volume transportation has enabled it to gain a deep understanding of logistics.